Share All sharing options for: Your Friday College Football Reader 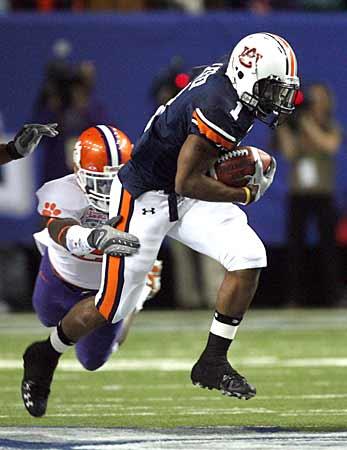 With most fans about ready to quit CFB cold turkey for eight months today, only the die-hards like yourself will be able to suffice on the sparse tidbits of information that will filter out of the sport after the bowls, CG game and recruiting season all wrap up. One interesting piece I caught in the business section of today's AJC concerns the financial vitality of the Chick-fil-A bowl, and had a breakdown of last year's Auburn-Clemson game, which is the most current information available. Some of the more interesting bits:

Included in those expenses was a payout to Auburn and Clemson of $5.93M, with Clemson getting slightly more than the real Tigers. Evidently, by contract, ACC teams get slightly more because they're typically a higher pick than the SEC team. Amazingly, the ACC teams seem to travel well to this bowl, probably because the words ACC Conference Championship Game appear nowhere in the title.

Yep, the Chicken Bowl appears to be quite the going concern, and the whole Atlanta Sports Council, the parent organization, is coming up roses with a bowl on both ends of the season, especially now that they've inked Alabama to their second straight pre-season game in the Georgia Dome. Somebody please tell Jay Jacobs to throw OUR name in the hat for the next season...

It appears that OC Gus Malzahn, fresh from his outing in the GMAC bowl, paid prize TE recruit Phillip Lutzenkirchen of Marietta, GA (or is it Luchenbach, TX?) a visit Thursday night in an attempt to shore up his soft commit to a firm one. Considered to be one of the top recruits in the country at his position, Lutzenkirchen (Man, if this guy comes to the Plains, we gotta get him a nickname QUICK so we don't have to keep typing that name) would make a fine addition to the long line of quality tight ends at Auburn that we never threw to. Hopefully, Gus can change that part...

And finally, for as much attention as this blog devoted to the Barkley debate, we seemingly let it go after his recent downfall. Like him or not, Barkley is a member of the Auburn family and I guess that most of us subscribe to the notion that if you can't say anything good about someone (especially a member of the family) just don't say anything at all. Regardless, this recent article by Jay Mariotti just about sums it up for me. Chaz, War Eagle and keep it zipped for a while...

Looks like LB Jonathon Atchison of Douglas HS of Atlanta has cancelled his weekend visit to Auburn and will stay committed to Alabama. Atchison was originally committed to Auburn, but decommitted after Tuberville's firing and had stayed in limbo since. Rivals has Atchison as the 24th best outside LB in the country.