How The Auburn-Tennessee Rivalry Started... From An Auburn Point Of View

Share All sharing options for: How The Auburn-Tennessee Rivalry Started... From An Auburn Point Of View 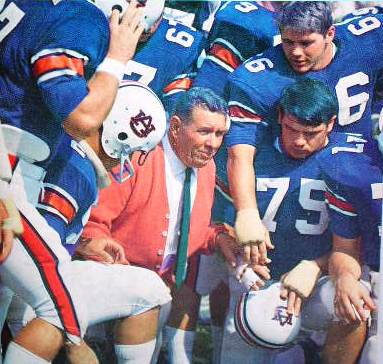 In researching the history of the Auburn vs. Tennessee series, I came across this interesting story put out by the Auburn Athletic Department that describes how the rivalry between the two schools came about. Told from the Auburn point of view, it paints a picture of a reluctant General Neyland fighting to stop the two schools from meeting. It's a great read...

The modern Auburn-Tennessee series which began in 1956 almost never got started. The year was 1951. Jeff Beard had just been named athletic director and Ralph "Shug" Jordan had just been named the head football coach. They were of the school that "to be the best, you have to play the best," and in 1951, as in current times, the best meant Tennessee. Tennessee, however, was in no hurry to play Auburn.

The Vols had nothing to gain by playing Auburn. Tennessee had gone 11-1 in 1950 and was on the verge of winning the national championship in 1951. Auburn was on the opposite end of the football world, 0-10 in 1950 and only three wins in its last 35 contests. "What would we have to gain by playing Auburn?" UT coach and athletic director, Gen. R.R. Neyland, asked Beard. "And besides, nobody would come to the game."

Beard disagreed. "Alabama and Tennessee have a great rivalry," he countered.  "Auburn and Tennessee could have the same kind of rivalry..." Neyland would have nothing of it. Jordan always believed there was another reason Neyland did not want to play Auburn. Two of Neyland's greatest teams, the '38 and '39 Vols, struggled to beat inferior Auburn teams, 7-0. Neyland, Jordan believed, thought Auburn had a "whammy" on Tennessee.

According to Jordan, Neyland had "vowed never to play Auburn again" because the risks did not outweigh the gain of beating Auburn. Beard and Jordan were persistent, and while Tennessee kept saying "No," Auburn was developing into a national power.

Poor health forced Neyland to go into semi-retirement in Florida in 1953. His replacement, Harvey Robinson, listened to Beard's pitch and thought he might have a point. The first Auburn-Tennessee game in 20 years was scheduled for Birmingham's Legion Field in September of 1956.

Neyland returned to power in 1955 and vowed that Tennessee would not play Auburn. He called Auburn president Dr. Ralph Draughton and he called Dean Roger Allen, chairman of Auburn's faculty athletic committee. Both backed Beard and they signed the contract. Neyland tried to get Bernie Moore, the SEC Commissioner, to intercede on his behalf, but Moore said there was nothing that he or the SEC could do.

As late as May 1956, at the SEC's Spring Meeting, Neyland said Tennessee would not come to Birmingham in September. Beard reminded him of the signed contract in the safe at Auburn. Tennessee went to Birmingham that September and the Vols got their revenge.

Led by tailback Johnny Majors, the Vols embarrassed error-prone Auburn, 35-7. It appeared that Neyland had been right.  Then came 1957, 1958, 1959 ... and more than 30 years of Southeastern Conference football glory. Auburn won the next year, 7-0, in Knoxville and started its run to the 1957 National Championship.

In 1958, Auburn avenged its humiliation in Birmingham two years earlier by holding Tennessee to no first downs and minus 30 yards total offense in a 13-0 victory. In 1959, Tennessee ended Auburn's 24-game unbeaten streak with a 3-0 win in Knoxville.  In three of the next four years, Auburn fell two touchdowns behind only to come back and win, 24-21, 22-21, and 23-19.

The rest is history.  Auburn-Tennessee became a Deep South tradition and the last Saturday of September for 35 years, from 1956-1991,  ranked as one of the most anticipated days of the football season for fans of both schools.