Tigers Trip and Fall, in the Ozarks.

Share All sharing options for: Tigers Trip and Fall, in the Ozarks. 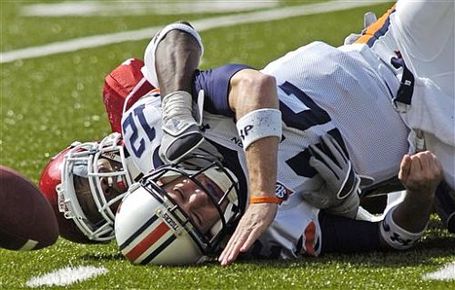 War Eagle, everybody. It's time now to do the post I've been dreading, the grades from the Auburn/Arkansas game. I've put it off for as long as possible, but at some point, one has to face reality and move on. I earlier made an analogy of Auburn's performance this season, judging it akin to a kid running full speed down a steep hill. You wondered when the kid would fall, and wondered how bad it would be. Well, now we know. This game was a lot like the time when I was a kid, and rode a skateboard down the steepest hill in the neighborhood. It was a great ride, I guess. I don't remember. Hit a dumpster at the bottom head-first, caromed off, and landed face-first in the creek. At least, that's what people told me... Auburn landed head-first in the ditch this trip, but it made my Tiger heart glad, at least for one thing: the Tigers were still swinging! Still fighting to the end! That bodes better things for the future.

Auburn's offense faltered for the first time this season, in Fayetteville. And of course, with any units' assessment, you start on the line of scrimmage. We were badly whipped, up front. Yes, Arkansas did apply more blitzes than anyone before. But even when they didn't, we couldn't handle 3 or 4 man rushes from arguably one of the worst defenses in the league. Missed blocks were rampant, from the line, to the receivers, and the backs. No one was able to line up and neutralize a defender, except for a small stretch of the third quarter in which Auburn exploded for 3 touchdowns. Had the Auburn offense played like that for more of the game, we might well have equaled or surpassed most folks' predictions. Much commentary has been posted on the play of quarterback Chris Todd, but aside of the fumbled snap on a crucial 4th down play, I can't find too much fault. Todd held the ball, but that's what you're SUPPOSED to do when your receivers are having trouble getting off the line. For all the negativity, Todd got sacked 3 times, and had no interceptions. He performed better than many, on the offensive unit.

Special teams were mostly solid, but kick coverage remains just AWFUL. I've been one of the top gripers the past couple of years, due to Auburn opponents averaging in the low 20s per return. Well, that average has ballooned, this year. Auburn gave up a whopping 48.3 yards per return, this game! That's average field position at midfield, for the opponent! We actually would have been about 10 yards better off, kicking every kick out of bounds! Clinton Durst largely has been unable to hit the towering, long punt. He did get great height in the game, forcing fair catches, but a 39 yard average won't win any post season awards. We didn't have our usual punt receiving miscues, largely because we didn't force many punts.

Obviously, we're in a whole lot of trouble, on defense. Aside from holding a bad La. Tech team to 13 points, we've basically been abused every week. 24 points against Mississippi State (an SEC cellar-dweller), 21 in the FIRST QUARTER against West Virginia, 30 against an 0-5 MAC team, and we failed to either sack or intercept Jonathan Crompton in Knoxville. I suppose I should have seen this sort of game coming. Frankly, we're lucky Arkansas only scored 44 points. Most of their failures came on bad passes. Many of Ryan Mallett's throws were to wide open guys, and were either uncatchable, or forced the wide open guy to dive for it. Had those sorts of throws been accurate, Auburn could have easily given up 60 or 70 points. Yes folks, it WAS that bad! We had an absolutely anemic day rushing the passer, and didn't get any real heat till late in the 4th quarter, when Antoine Carter turned the corner for the first sack of the game. One thing you could always count on in the past decade, was that Auburn's defensive line was going to GET after it! Not so, lately. Reggie Torbor, Bret Eddins, Stanley McClover, Marquise Gunn, Quentin Groves, where have you gone? We've got no threat, rushing the passer, anymore. The seven step drop is available, for any SEC team that wants to try a bomb. Even our normally solid coverage failed in Fayetteville. Neiko Thorpe stayed on his man like glue for the most part, but was utterly incapable of keeping his man from making the catch anyway. Walter McFadden, playing banged-up, made one spectacular interception, and was done for the day. Slot guys and secondary receivers were WIDE open, all day. We don't have NEARLY enough pass defenders. In addition, we seem to be coaching WAY too much hand use, in coverage. It burned us repeatedly, as the officials were looking for it. We don't have a weakside linebacker. I think we've gotten 2 tackles TOTAL, from that position, in the past three weeks. Folks, we're well on pace to be the worst Auburn defense in history, as far as points given up. Earl Brown's 0-10 1950 team only gave up 25.5 per game. Right now, Auburn is giving up 27.1. With Kentucky, LSU, Ole Miss, Furman, Georgia and Alabama left on the schedule, will that number go down?

Grades, after the jump.

Defensive Line: F. If there has been a worse performance in Auburn history, I don't remember it. Arkansas ran 82 offensive plans, and defensive linemen were in on 13 tackles. Auburn had only 1 sack, and 2 quarterback hurries, on 38 passing plays. Preseason All-SEC end Antonio Coleman did not record a single stat. We applied no pressure, filled no gaps, and were routinely blown off the ball. Awful performance.

Linebackers: C+. Oh, yes, I saw the repeated grabs on guys cutting over the middle. I saw the lost gaps. Still, the only real defensive production we got was from Josh Bynes and Craig Stevens. Those guys are playing hard, and trying to keep us in games. Those two combined for 20 tackles, the rest of the linebacking corps had just 5 stops. The linebackers need some help, from the rest of the defense!

Secondary: F. Some would say, with Walter McFadden's perfectly played interception, it should be a passing grade. Those guys made 36 tackles! They also let Arkansas pass the ball with impunity. No pass breakups, and one interception. Arkansas had guys wide open, all morning/afternoon. When your secondary makes over half the tackles, you're playing some really bad defense.

Punting: C+. Overall, we had a 39.0 yard net, which is pretty good. We've done a pretty fair job of kicking it where the other team can't return it, giving up only one 6 yard return in this one. However, aside from one 52-yard rainmaker, Clinton Durst's kicks weren't terribly impressive, in this one. Take away the 52 yarder, and he averaged only 36.8 yards on the remaining 6 punts.

Punt Returns: C. Phillip Pierre-Louis had a nifty, shifty 15-yard return when we needed a spark. Unfortunately, he only managed to field one punt out of four. Still, turnovers were avoided, and that's a heck of an improvement!

Kickoffs: F. As hard as it is to believe, we continue to regress, here. Distance was better on the kickoffs, but coverage added failed arm tackles to the repertoire. Arkansas' Dennis Johnson's SHORTEST return was 25 yards. We gave up a WHOPPING 48.3 yards per return! Factoring in Auburn's 68.6 yard kickoff average, Arkansas averaged starting on the 49 yard line, after an Auburn kickoff.

Placekicking: A+. Not many opportunities in this one, but they all were converted for points. Wes Byrum IS money!

Offensive line: D. This grade may be a bit harsh, but our protection was as lousy as I can remember since the Barfield era. The line did bow up and do some great run-blocking in the 3rd quarter, but otherwise, got absolutely manhandled. Arkansas managed 3 sacks and 3 quarterback hurries, and the Tiger offense was continually disrupted, up front.

Receivers: D. There were ups and downs, with this unit. The timing of the bad plays, though, was awful. When a screen pass would go incomplete, you can bet that a receiver was downfield flattening an Arkansas defender. When the pass was there, you could also bet that the Auburn man would absolutely whiff his block. Auburn receivers had 3 drops, which doesn't sound like much. It's not, with most squads. We've been spoiled to this point, this season, with near perfect hands. Against Arkansas, our receivers were mortal.

Running Backs: B-. If we have a tougher bunch in history, I'm not sure who they are! Ben Tate continues to have an all-Star season, and nearly single-handedly put us withing striking distance in the 3rd quarter. Onterrio McCalebb had a heroic performance, playing hurt. Eric Smith, as usual, contributed. Smith, and especially Mario Fannin, combined for a half dozen drops. Someone must step up at H-back, down the stretch for Auburn...

Quarterback: C. One turnover, no touchdowns from this position. Honestly, Todd never really had a chance, in this one. He did try to force some things, and once again was lucky not to have an interception or two. There were missed opportunities, such as a wide-open bomb to Terrell Zachary that would have gone for 6, and an early lead. There were times that Todd held the ball when receivers were open. Todd could have done better, but with pressure in his face all day, he could have done a WHOLE lot worse.

In sum, this was a disappointing Auburn performance. With a young team, these things are bound to happen. Even when Auburn has been loaded, veteran, and talented across the board, they usually manage at least one bad game per year. There were the Amazin's of 1972, who got blown out by LSU. The 1983 champions, lost to Texas. Auburn took a 34-6 beating from FSU, for the only loss of 1987. Did you know, that despite dominating the SEC since Steve Spurrier's arrival 20 years ago, that the Gators have never gone undefeated? As others have opined, Auburn was due for a let down. It happened, and all we can do now is to regroup, work hard, and try to destroy our remaining opponents!

For Auburn to succeed down the stretch, and finish better than 6-6, several things need to happen. First, both lines of scrimmage need to play better, particularly the defensive line. If anyone can get it done, I think Tracy Rocker can. We actually have more depth at D-line, than in any other place on the team. Maybe some shakeups are in order? Auburn must tackle better. Missed tackles have just KILLED us, to this point. And finally, we mustn't give up! This team will be in every game they play, if they don't get down on themselves, and KEEP FIGHTING!

Auburn's remaining schedule has opportunities. Kentucky will be visiting next week, without their starting quarterback. Mike Hartline is out with a knee injury, and Wildcat options include a wide receiver, and a backup with no experience. LSU will be tough in Baton Rouge, but fields the league's worst offense. Ole Miss is pretty awful on offense, as well. Furman is having a REALLY rough season. Georgia has a very soft defense, and issues with both the running game, and at quarterback. Then, there's Alabama. We host 'em. I'd like to think that we won't let 'em walk out of Jordan Hare without a fight! War Eagle, everybody! And let's roll the Wildcats!