It's Pivotal Game Week, in Auburn!

Share All sharing options for: It's Pivotal Game Week, in Auburn! 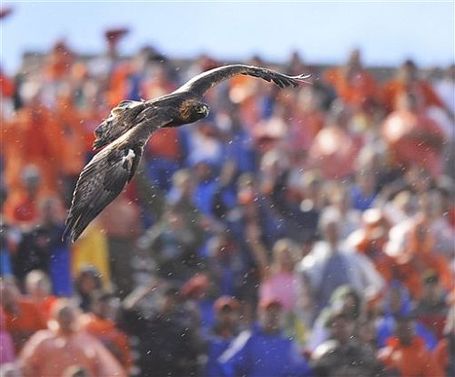 War Eagle, everybody! Before the season started, I singled Kentucky out as an extremely important game for the Tigers. I figured that if Auburn won this game, they'd assure themselves of a bowl trip. Were Auburn to lose this one, a losing record would likely follow. With the upset over West Virginia earlier in the year, Auburn can now avoid a losing record by winning even one of their remaining games. Even so, this game is still important! Should Auburn be unable to beat Kentucky, it's unlikely that the Tigers will take any other SEC teams. It's pretty much a given that Auburn will beat Furman, but coupled with losses in the remaining games, Auburn would finish 6-6. 6-6 teams get left at home with regularity in the bowls. Just ask Steve Spurrier and the 2007 South Carolina Gamecocks!

Auburn had no football history with the Wildcats, till the 1930s. After a decade of poor Auburn teams, coach Chette Wynne brought Auburn back to respectability. In Wynne's third year, Auburn broke out of the pack, powered by All-American tailback Jimmy Hitchcock. The Tigers won their first nine games, and ended the season with a 20-20 tie with South Carolina, in Birmingham. Wynne's 1932 Tigers won a share of the old Southern Conference title, in the last year of its existence. At the end of the next season, Chette Wynne was hired away by Kentucky. Auburn immediately wrangled a two game series with the Wildcats, hoping to exact a measure of revenge!

Auburn lost in Lexington 9-0, in 1934, but got their revenge in 1935, with a 23-0 win in Montgomery. That loss derailed a promising 3-1 start (the loss being to Ohio State), and the Wildcats finished 5-4. Wynne was unable to duplicate his Auburn success in the Bluegrass state, and was fired at the end of the 1937 season.

Auburn didn't play the Wildcats again, till the 1950s, when the teams signed a long-term contract. From 1954 through 1971, Auburn and Kentucky played every year. After an initial loss and a tie, Auburn pretty much had their way with the Wildcats. Auburn only lost 3 of the next 16 matchups. The annual series ended in 1971, a casualty of new scheduling rules. Kentucky would become a rotating opponent for Auburn. Auburn has not lost to Kentucky since 1966, when this writer was in first grade! Auburn is 24-5-1 against Kentucky, all time.

I'd imagine that everyone who follows SEC football knows that Kentucky quarterback Mike Hartline is out of this weekend's game with a knee injury, one that may sideline him for the rest of the year. Auburn must guard against relaxing for the second week in a row, because of that news! The Wildcats have a strong offensive line, excellent runners, and a decent receiving corps. One can imagine that Kentucky will try to gash out the tough yards and move the chains. They bring in the number seven rusher in the league, in Derrick Locke.

Once again, Auburn will be facing a desperate team. Kentucky needs SEC wins. They have Louisiana Monroe and Eastern Kentucky on the schedule, but they need two SEC wins to get to 6-6. The likeliest candidates are Auburn, Mississippi State, and Vanderbilt. The Wildcats will come into Jordan-Hare hoping for a big win, and should be fired up.

All is not gloom and doom for Auburn, though. The 'Cats have a lower echelon SEC defense, and they are hurting on the edge. With better o-line play, Auburn's offense should return to the numbers posted in the first five games. And with first downs, yardage, and time of possession, the tired defense will be helped as well. As usual, we'll have an open thread up early, here at TrackEmTigers.com! War Eagle, and let's beat the Cats!