Mark Richt the Second Coming (And Going) of Tommy Tuberville?

Share All sharing options for: Mark Richt the Second Coming (And Going) of Tommy Tuberville? 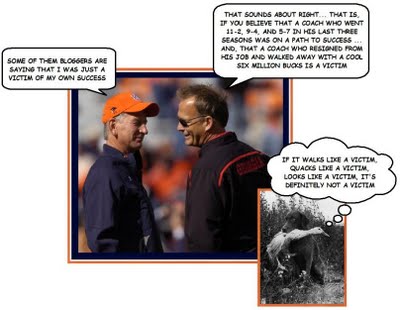 Grumblings have been heard out of Athens, GA this week for the first time following Georgia's pounding by Tennessee, 45-19. Georgia is now 3-3 on the year and people are starting to talk about Richt's future--in the open. The Birmingham News' Kevin Scarbinsky thinks that parallels can be drawn between Richt's future and that of the recently departed Tommy Tuberville.

It looks like the second coming (and going) of Tommy Tuberville, another nice guy who finished his otherwise productive tenure by finishing last. No one expects Georgia to finish last this season, though the Bulldogs will find it difficult to win even the B flight of the SEC East. No one expects Richt's tenure to end this season, either, but these things tend to follow a pattern. A popular coach becomes unpopular gradually, and then suddenly, and no one can foretell exactly when the slow descent will pick up enough mass and speed to become a runaway snowball.

Few would dare believe that Richt is in trouble at the end of this year, but never underestimate that snowball metaphor. Should Georgia drop one to Vandy tomorrow, then all bets would be off, especially with the meat of the Dawg's schedule coming up with Florida, Auburn and Georgia Tech.

In an email to the Atlanta Journal Constitution this week, Georgia AD Damon Evans had this to say about their 3-3 record:

I do have some concerns about where we are at this point of the season. Beyond that, I have total confidence that Coach Richt will properly evaluate our team, address concerns and prepare the right path that will direct us back into the position we all want to be in --competing for championships.

Although there is a chance that Georgia could drop all three of their biggest rivalry games, the odds are that they will finish with a winning record, making them bowl eligible, something that Tuberville and the Auburn Tigers were NOT last year.

The one clear thing that Richt may have in common with Tuberville is that he may eventually be a victim of his own success. Georgia fans have enjoyed eight years of 10+ wins average. Have they no recollection of how times were under Ray Goff and Jim Donnan? Other than losing to Florida, much has changed since the years of obscurity following Vince Dooley. To think that you can't ever have a down year is very unrealistic but so typifies the average SEC fan.

Scarbinsky thinks that Nick Saban rode Tommy Tuberville out on a rail and that eventually, Urban Meyer will do likewise to Richt:

If perception is reality, Richt is to Meyer as Tuberville was to Nick Saban as the lamb is to the lion. Sooner or later, the lamb is lunch.

But it was the Auburn administration that had it in for Tubs. He was toppled more by a palace coup than an attack from the outside. You have to love how easy Bama apologists like Scarbinsky so quickly connect the dots, and their favorite conspiracy theory of all time is that Saban caused all this by merely showing up. I call it The New Sherrif in Town theory, and we Auburn folk were helpless in that part of The Process. Ouch!! That hurt!

But Tubs' troubles are a problem that Richt doesn't have. He has the full support of the powers that be between the hedges and will be given ample time to right his ship. With Tennessee possibly resurging under Kiffin and the Old Ball Coach still lurking in the east, Richt will have at least a year. ONE year.