Auburn Fizzles against the Wildcats.

Share All sharing options for: Auburn Fizzles against the Wildcats. 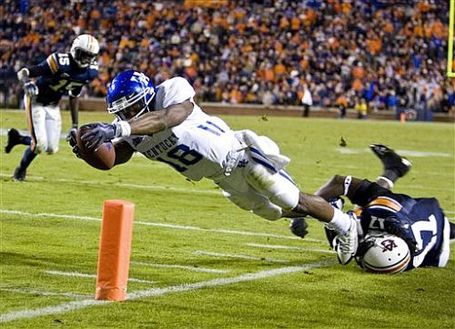 It's time to cool off, and give this rebuilding team a chance. We knew it would be tough, this year.

War Eagle, everybody. It's time now for the Acid Reign report on Auburn's 21-14 loss at home to Kentucky. At the midpoint of this season, we now are beginning to get some answers about this team, and not many of those answers are pretty. The Tigers have serious flaws and are really struggling with the fundamentals of the game, such as blocking and tackling. Even the simple things like throwing and catching the ball, lining up correctly, and not moving before the snap are issues. There really won't be time to boot-camp these things, till we get to bowl practice. We have what we have. I call on all Auburn fans to stay behind this team, and cheer them on through the tough weeks ahead. The players will need your support!

It is a weekend where everything went wrong, for Auburn. This morning, even the Auburntigers.com website is messed up. It's very tricky to get past the clever opening advertisement pages for the basketball teams. Neat stuff, but someone forgot to put a "bypass" button on there! As expected, Auburn's defense was more physical this week, and actually contained a run-heavy Kentucky scheme for 3 quarters. Fatigue set in late, and Auburn was mauled in the 4th period. Even with the improvements, Auburn is still making too many tackles in the secondary. Kentucky ran the ball 49 times, and completed just nine balls. Out of those 58 opportunities the Auburn secondary made 27 tackles, nearly half. Josh Bynes led the team with nine tackles, but didn't get much help from the other linebackers. Stevens had seven, Herring 3, and Evans 1. That's only 20 linebacker tackles, when the other team ran it 49 times. We continue to hurt, on defense.

Special teams play took a step back this week, too. Weather probably did play a part. It seemed like Auburn was kicking against the wind the whole game. Kentucky's average position after kickoffs was their own 40 yard line. We could just kick it out of bounds every time, equal that field position, and not risk a TD on the return. (Except that the smart opponents would make us kick it again.) Punting was weak, although we did have good coverage. At least the return game didn't have any turnovers. Otherwise, it was unproductive. Kentucky killed 4 punts inside the Auburn 20, and our kick return average is down to seven yards. As fast as teams are getting down the field, defenders like LSU has might well just be able to field the kickoff on the fly. We are slowing no one down on the other team's coverage units.

I've seen bad offenses at Auburn before. What's new this year, is how much it has declined since the first three games. I've never seen this much variation in a single season. Every offense is dependent on its quarterback, of course. Chris Todd has not made the throws, the past few weeks. He's not really throwing the weak balls as much as he did last year, but his accuracy has seriously waned. I wonder if the shoulder is still bothering him? As others such as Col. Angus have pointed out, Todd really seems locked in on Darvin Adams most of the time. When Todd did get the ball in the same zip code as the receivers, there were some drops. One way or another, we have to get better throwing the ball. For the first time this year, I think Gus Malzhan called a pretty poor offensive game plan. Probably the worst call was sending 160-pound Onterrio McCalebb, bad ankle and all, into the line on a short yardage play. Our reverse threat with McCalebb has diminished, too, and teams are now just following the guards to seek out the ball. Our best reverse threat now is Terrell Zachary, but we only tried that once. It picked up 15 yards. Ben Tate continues to run the ball well, but needs to have some help from other skill players. Our offensive line played pretty decently, till the avalanche of 4th quarter penalties.

Grades, after the jump

Defensive Line: B-. It was a courageous performance by a banged up unit. I don't think we have a healthy defensive end. Against a good offensive line, Auburn got some disruption in the middle, and even some pressure on Kentucky's few passing attempts. Outside contain was spotty, but the worst damage was done in the middle. We often got out of our gaps up front. The quarterback keeper up the middle was a good play for Kentucky, all day.

Linebackers: D+. Josh Bynes basically held the front seven together by himself against Kentucky, but was hardly perfect. All of the linebackers are still taking bad angles on ball carriers frequently. Bynes' worst play was on the quarterback keeper that tied the game at 14. Josh Bynes came unblocked up the middle, but tried to dive at the QB's legs. All he had to do was run through Fiddler, and it would have been a big time sack/stop, and Kentucky would have had to try the field goal, rather than tying the game. Craig Stevens is pretty easily blockable. Lanxter and Matthews, Kentucky's wide receivers, both were able to shove Stevens completely out of bounds on a couple of sweeps. Adam Herring over-pursues, and continues to be burned by the cutback.

Secondary: C+. We continue to miss a lot of tackles, and this game, opted for a pretty soft cushion on the wide receivers. Luckily, Kentucky didn't try the hitch pass much. It was there, all day. We utilized a lot of cover one robber, bringing a safety down to help with the E and F gaps, and it helped hold Kentucky down for much of the game. We have to do that, because our linebackers can't get off blocks. In the 4th quarter, though, Etheridge, Bates, and Slade were too exhausted from making tackles and chasing backs. We just could not track Kentucky runners down in the secondary, late.

Punting: D+. Maybe it was the wind, but we got no distance on most of our punts against Kentucky. There was one 54-yard monster from Clinton Durst that flipped the field, and set up our only touchdown. Take that one away, and Durst only managed 32 yards per punt. The vast majority of high school punters in our state can do better than that. If there's a silver lining, Randall Cobb only managed to return two of seven punts, and we held him to two yards. On the other hand, most receivers aren't set up to handle 30 yarders. Auburn even managed an illegal formation penalty, on one punt.

Punt Returns: B. Surprised? There wasn't much we could do, here. Kentucky punted six times. One was a touchback, 4 were inside the ten yard line. Phillip Pierre-Louis did exactly what he was supposed to do in those situations: get away. Points off on the blocking, on the one punt that was returnable. PPL did exactly the right thing again on that one, fair catching.

Kick Returns: D-. We pass because we didn't turn one over. With a game upcoming against Les Miles, I don't think that will continue. Kentucky used the sky kick on 3 balls, and we were limited to 7.0 yards per return. Phillip Pierre-Louis made his debut on this unit, and tried to run over the first man down, on both tries. Didn't work. Fannin was swarmed early, on his 11 yard return, as well. We can't get the usual block in the back flag on these things, because we can't block at all on returns, it seems.

Kickoffs: F. Without giving up a touchdown, we averaged a 29.3 yard net, on our three kickoffs. Any way you slice it, that's a total "fail." Auburn abandoned deep kicking, for the sky-ball to the 25. Kentucky STILL managed 15 yards per return with three different players.

Placekicking A+. Wes Byrum was two of two on extra points. We gave him no other opportunities.

Offensive Line: B+. Points off on the false starts in the 4th quarter, but this unit played well enough to win, aside from that. I haven't really graded it to be sure, but I think nearly every play, each lineman successfully blocked the guy they were assigned to. We had only one negative carry, and no sacks, all night. Auburn threw the ball 25 times, and Kentucky only had two quarterback hurries. Auburn averaged 5.8 yards per rush. Whatever was wrong with the offense, it wasn't up front.

Receivers: C. There were some wrong routes run, some lackluster downfield blocking, and a few drops. We're starting to see the receiver corps we envisioned back in February, and that's not good! Tommy Trott was part of the 4th quarter false start parade. Terrell Zachary continues to make plays after the catch. We just need to get him the ball more.

Running Backs: B. Ben Tate continues to pile up the yards, but he took a lot of carries to do it. Lead blocking fell off in this one, with neither Eric Smith nor Mario Fannin able to handle 260-pound linebacker Micah Johnson. Tate could shovel forward for 3 pretty well, but was not going to get loose for the big one, this game. Note to Gus Malzhan: defenses have figured out that 3rd down wheel route to the fullback. Might want to swing it the other way, to the tailback, a bit.

Quarterback: D+. In this game, Chris Todd did not really give us a chance. If he did anything well, it was getting rid of the ball. He also executed a pair of pretty decent runs, and even threw a couple of blocks in the Wildcat. Todd reminded me of Daniel Cobb, throwing the ball. Cobb, as you'll recall, was another Auburn junior college transfer, who came in with shoulder problems. Both quarterbacks were streaky, looking brilliant at times, and at some points totally unable to connect with open receivers. Todd was great early in the year, but his accuracy is suffering badly, right now. His confidence HAS to be down a bit, too. Bonus points for some good play in the Wildcat, from Kodi Burns.

In a spread offense, the threat of throwing to any of those split-out guys HAS to be there. Right now for Auburn, defenses are starting to ignore anyone but Darvin Adams, on the outside. We can talk downhill running in press conferences, and impress the old guard, but we've got to throw it better, to have any chance of winning our remaining SEC games. Rather than calling for the hook on Chris Todd, I think we have to trust the coaches we hired. They'll make the right decisions. We have to believe that. It's still a top-shelf staff. They didn't suddenly get stupid, in the month of October.

At Auburn, we believe in work, hard work. And that's what this team will do, work hard in the coming weeks. Stay behind your Tigers, folks. Shame on the fair-weather fans who exited early, Saturday. This team deserved better.