Memories of Auburn vs. Tennessee

Share All sharing options for: Memories of Auburn vs. Tennessee 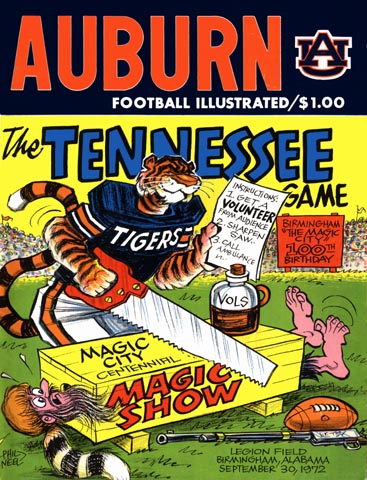 The build up to Saturday's game with Tennessee has given this week an old school feel.  With the weather finally breaking in East Alabama and the leaves showing signs of change, the only thing missing is Pat Dye stepping up to the microphone and coughing his way through a morning press conference.

One of the great losses of the 1992 SEC realignment was the elimination of the annual Auburn vs. Tennessee series. For me, it ranked right behind Georgia and Alabama. I can still vividly picture Dye, with his baseball cap, blazer and Auburn colored tie, leading his orange face masked Tigers onto the old artificial turf of Neyland Stadium. Like former Tennessee radio announcer John Ward used to say, it was truly, "Football Time In Tennessee."

The annual rivalry in late September typically marked the first cool weather contest of the season and the first real test for both schools. Championship runs were started and dreams were ruined in this early season ritual. Who can forget the 1985 game when Auburn came to Knoxville ranked number one in the country and left in shambles?

To this day, it remains one of the most disappointing losses in Auburn history - and it wasn't even close. The following week, Tennessee was the Sports Illustrated cover story.  For Auburn, it signified the start to a disappointing 8-4 finish. Auburn has not been ranked number one nationally since.

For me personally, the 1989 contest takes the cake.  Never mind that Auburn lost that afternoon - that was hardly the story. That rainy September day marked my first as an official member of the media. A junior at Auburn, I was assigned to cover the game for The Plainsman and WEGL Radio. It was my first visit of any kind to a press box and needless to say, the butterflies were working overtime in my stomach.

My first duty was to do a live radio update from the stadium prior to kickoff. I don't have the slightest memory of what I said, but I'm sure it made no sense. If I had been more rational, I would have calmed down and realized that no one listened to sports on WEGL. I'm certain my family was the only one tuned in.

The highlight of the day was eating lunch and talking with the late, great television and radio announcer Lindsey Nelson. He was in attendance that day and I suppose feeling sorry for me, he sat down and ate with me.  It was one of the great moments of my life. Following the game, in the locker room, I got my first taste of what a pissed-off Pat Dye looked like after defeat. He was screaming at any media member who dared ask a question.  Needless to say, the kid kept quiet.

The following year, third-ranked Auburn welcomed fifth-ranked Tennessee to Jordan-Hare Stadium and it became something of a coming out party for a little known freshman named Stan White.  Trailing the Vols by 17 points in the fourth quarter, Auburn stormed back to tie the game at 26-26. Tennessee missed a field goal with 15 seconds remaining and the game ended in a tie. Never has a tie felt more like a win than that night. The voters agreed and dropped Auburn only two spots in the polls the next week.

In recent years, despite not meeting annually, the Volunteers have played big roles in some of Auburn's most historic and greatest moments. The Tigers first trip to the SEC Championship Game in 1997 was to face the Peyton Manning-led Volunteers. While Auburn came up short that day primarily due to two inexplicable touchdown drops by the usually steady Karsten Bailey, Auburn played one of its best games of the year and finished the season with a 21-17 win over Clemson in the Peach Bowl.

Auburn defeated Tennessee twice on the way to the 2004 Perfect Season, including a rematch in the SEC Championship where the Tigers prevailed 38-28. This followed a 34-10 blow out of the Volunteers in Knoxville in early October.

Auburn has now won four in a row over its old rival, including last year's ugly 14-12 win at Jordan-Hare Stadium. Overall, the series record stands at 26-21-3 in favor of the Tigers.

Saturday night more memories will be made in this great series. This time two young coaches go after the biggest win of their head coaching careers. Auburn's Gene Chizik and Tennessee's Lane Kiffin know the history of this rivalry and what a win can mean for their programs. The eyes of the nation will be watching - like they always do. War Eagle!