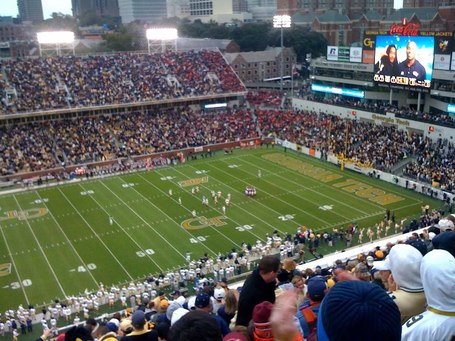 We're not in Jordan-Hare anymore, Toto...

I played hooky from the Kentucky game Saturday night. I had a better offer. A friend offered me some seats at the Georgia Tech/Virginia Tech game at Grant Field. I couldn't pass it up. Hey, it's a lot closer, it was cheaper, it was a better match up and I figured the Tigers could rebound from the Arkansas game without me. Maybe we needed a little time apart since it didn't go well the last time we spent time together. Besides, I hadn't visited Grant Field since almost 24 years to the day, watching Bo Jackson run all over a hapless Tech defense. I was sitting in the Tech student section that afternoon--the first and LAST time I ever sat in an opposing student section. Some lessons are learned hard.

The plan was to rush home after and catch the last quarter of our game. I was recording it and could watch the rest of it later. All I got was a few scores during the Tech game. The last one was 14-7. No worries, I thought. They'll run it up as I drove home. As it turned out, ignorance was bliss. I got home just in time to watch Kentucky tie it up, then go ahead with three minutes to go. I watched as we threw it into the dirt on 4th down, sealing the win for the Wildcats.

The next morning, I prepared myself to cue up the Tivo, to do my Auburn duty and find out what happened. I made it through the first quarter, but that was all I could watch. It was hateful. I knew what the outcome was going to be and I couldn't bear to watch the train wreck leading up to it. Maybe if I had spent the previous night in a cave and had no idea what the score was I could watch, but I'd try everything imaginable to sneak a score before it was done. I hate it when my DVR gets even a few seconds behind actual time. I skip over stuff just to race back to 'live'. Surprises are nice, but I hate suspense. Don't even get me started about Christmas presents.

Bottom line: I didn't watch the game. I'm not going to. I got the synopsis of misery from everyone else. Nothing will be gained from my injection of depression from the outcome, so in place of my normally scheduled program of post game acclaim and blame, I present my little (down the) road trip to Bobby Dodd Stadium at historic Grant Field--the oldest stadium in the country, and actually, one of the most charming.

We SEC'ers like to measure our program in part by how large our seating capacity is. Grant Field is basically at 55,000, a place that it's been since the 1960s. It's so tucked away inside the skyline of Atlanta, right down Noth Avenue from the Varsity, you'd never know it was there until you ran up on it. Although it shares the name, Grant Field is not the same as Grant Park, the place where college football was born in the deep south when Auburn and Georgia played in 1892, but it is somewhere that old-time Auburn fans should well be acquainted. Over two decades since we played our series with North Avenue Trade School on an annual basis, Tech is still the #2 ranked school in all-time games for Auburn.

For almost the first 70 years of that series, virtually all of the games were played in Atlanta. Many Tiger fans used to think that our players were hypnotized by the Atlanta skyline. In the 1960s, we were able to get our home games played at Legion Field, and finally got the series into Auburn on a home and home basis starting in 1970. That spelled the beginning of the end, as Auburn then dominated the rivalry, winning 19 out the the last 22 until the series ceased after 1987. Many Auburn fans have never had the pleasure of a game at Grant Field. That is a shame.

The walk over to the stadium is like that at any number of campuses. Streets are closed down, and fans pile into the stadium, which basically sneaks up on you. I came in from the north, which is a little different from the more recognizable entrance on the south side at North Avenue. Our seats were in the upper deck on the west side, but it wasn't a real climb up there. Although we were near the top, it wasn't near as far a drop to the bottom as it is at Jordan-Hare. I hate sitting in the upper deck at JHS, but these seats were good. You were high enough up to see all the plays develop, but not totally removed from the sight and sounds and intimacy of the game.

It's kind of strange, but I swear that the west upper deck is significantly taller than the east one. Yea, I'd had a few drinks, but the pictures bear this out. The students are tucked away in the north end zone, and the south end zone is open with the jumbotron in the middle, with HD ribbons lining inside the bowl, too. But the great part about sitting on the west stands is the backdrop you get to stare at. 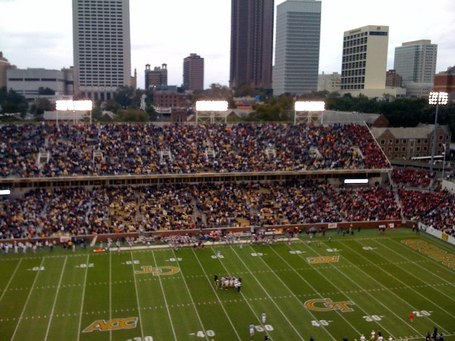 I just don't know if there's a prettier view in all of college football. Maybe I'm biased because it's my home town, but this is a great place to watch a football game. The fans get loud, maybe even approaching JHS, but they're not near as loud as their jumbro-tron. Virtually the entire board is television and you can see it perfectly. They showed videos of the players leading the crowd in cheers and even played student videos at half time. The mix of game replays and original content was very well done, even better than that I saw at the Georgia Dome the next night for the Falcons-Bears game.

The only complaint I had was the fact that in spite of a national TV audience and #4 Virginia Tech in town, they still didn't sell the game out. There were stories all during the week that roughly 1000 tickets remained and you saw the bald spot of fans in the upper north end zone deck. I'd have to say that under HC Paul Johnson,this problem will soon solve itself. Catching a Tech game has to be one of the entertainment bargains in the Atlanta metro area. I'd even reccomend it for any CFB fans passing through. Normally, you think that tickets are unavailable for a team of this magnitude, that you have to go online or deal with scalpers. Little could one imagine that for the highest-ranked game of the day, you could still walk up and purchase tickets at the box office at game time.

Towards the end of the game, I saw possibly the coolest team ritual/cheer I've ever seen. Between the 3rd and 4th quarters and following a victory, the Tech band plays the Bud song, lifted straight from the Budweiser beer commercial from the 1970s--the one that says when you say Budweiser, you've said it all.  I think Wisconsin does this cheer/song, too, but the Techies have it mastered. When the music starts, everyone starts bobbing up and down, totally out of synch with each other. It is so hilarious. Hell, we borrowed Glory, Glory from Georgia. I'd like to see us lift the Bud song, too.

So it was fun being a Tech fan for the day. This week, I'm all Auburn Tiger again. I won't be making the trek down to Baton Rouge, but I'll be watching our boys on TV, rooting them on as usual. Last week is a distant memory now. We will move on, we will get through this. War Eagle!!!