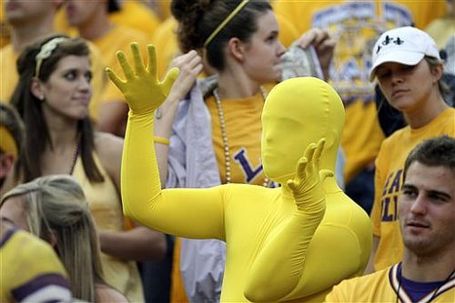 This person predicts LSU by thiiis much!

War Eagle, everybody! After a cool, fall-like weekend, we're back to air-conditioning in the car again. Such is October in the South. We're officially midway through the 2009 football season, and the championship and bowl races are starting to shape up. As most folks expected in the SEC East, Florida remains the team to beat. After the close call with Arkansas last weekend, is there anyone else on the Gator schedule who can pull the upset? Georgia and South Carolina are the only teams left on Florida's schedule who currently have a winning record. The Carolina game is in Columbia.

In the SEC West, most folks now agree that it's undefeated, number one-ranked Alabama's division to lose. The next three weeks will likely tell the tale, as Alabama hosts Tennessee this week, then after an off week, LSU. Should the Tide win both of those, no one will be able to catch them. Mississippi State, Chattanooga, and Auburn remain on the Tide schedule, and unless the Tide were to drop two of those three, they'll win the division.

LSU still has a chance in the West, but has a tough remaining schedule. The Bayou Bengals have already lost to Florida. They host Auburn this week, then finish a non-stop grind with Tulane, Alabama on the road, Louisiana Tech, Ole Miss on the road, then Arkansas. It's a brutal finish, and LSU just about needs to run the table.

Midseason Marks, after the jump! (As well as Auburn at LSU thoughts...)

Earlier this season, I began tracking SEC teams by virtue of their starting passer's net yards per pass. To review, net yards per pass is the total passing yards, minus 50 yards per interception, divided by the number of passes attempted. At mid term, here's how the SEC shapes up:

Tim Tebow leads the league, despite what many folks are now calling a lackluster year for the Gator offense. Greg McElroy and Chris Todd have slipped a bit, but none of the quarterbacks have been in as much of a free-fall as Georgia's Joe Cox. Ryan Mallett continues to rate highly for the Razorbacks, despite Arkansas' place in the cellar. The early SEC schedule has been brutal, for Arkansas.

I suppose I've put off weighing in on this Saturday's Auburn/LSU game as long as I can. In my preseason matchup post, I worried a good deal about this game. I still think Auburn's D-line can hold their own with the LSU O-line. However, Auburn's linebackers have been worse than I predicted, particularly on the weak side. LSU runners may be poised for a breakout game. Auburn corners will have trouble with a good LSU receiving corps, and if  Walter McFadden isn't healthy for the Tigers this week, it could be even worse. I had figured LSU quarterback Jordan Jefferson would struggle in his first full season, and he has. Auburn has been worse at safety than I had expected. Mike McNeil has been a no-show, Zach Etheridge has been limited, and we've started a true freshman in McNeil's place. The burden is really on the Tiger defense, this week. Auburn MUST force some thee and outs, in order to stay fresh for the 4th quarter.

On special teams, Auburn has largely been unable to punt themselves out of bad situations. Returns have been lackluster at best, although an early-season fumbling problem seems to have been fixed. Kick return coverage has been abhorrent. We might want to consider trying an onsides kick every time. We'd end up giving up about the same field position, I think! While LSU's special teams haven't been anything to write home about, they've been light years more consistent than Auburn.

Auburn's offensive line played like gangbusters out of the gate, but then the suspension of Byron Issom threw things off kilter, and the line really hasn't recovered, despite Issom's return. LSU will bring the best D-line Auburn has faced all year, at least against the run. LSU has not had many sacks. The LSU front seven is holding opponents to only 3.5 yards per carry, and the D as a whole is allowing only 3.6 net yards per pass. Auburn comes in averaging 5.4 per carry on the ground, and 6.8 net yards per pass. Something has to give, one way or another! Given Chris Todd's play of late, attacking a veteran LSU secondary will be a difficult proposition. Auburn's best bet is to try to get the running game established early, and continue to drag the LSU front seven from sideline to sideline.

In the end analysis, Auburn will be at a severe disadvantage, in this game. LSU will be rested, and recovered from their loss to Florida. Coordinators Gary Crowton and John Chavis will have had an extra week to scheme against Auburn. The Auburn Tigers definitely seem to be showing some wear and tear, after seven straight games. To go into Baton Rouge, and win under these conditions will be a very tall order. Auburn must eliminate mistakes, play hard, and see what happens. War Eagle, win or lose! We'll have an open thread up on TrackEmTigers.com, Saturday morning! As always, chime in and have fun!