Tigers on a Mission, in Baton Rouge!

Share All sharing options for: Tigers on a Mission, in Baton Rouge! 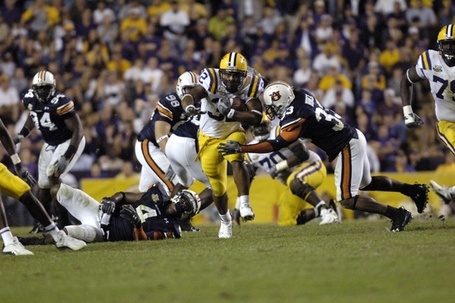 (Track this man, Charles Scott, down and stop him!)

War Eagle, everybody! Tonight, the Auburn Tigers take on LSU, in Baton Rouge, at 6:30 PM, CDT. The game will be televised on ESPN-2. It's another important SEC matchup for both teams. The loser of this game can pretty much kiss any division championship dreams goodbye, after this one.

Auburn's record in Baton Rouge has been anything but stellar. Auburn is 5-13-1, all time, in the Louisiana state capital. The last Auburn win in the series came in the infamous 1999 "Cigar Game," when Auburn defeated LSU 41-7. Since 2003, the Auburn/LSU game has been decided by less than seven points, each year. The 2004 game was decided on a re-kicked extra point, which gave Auburn a 10-9 victory. The 2005 game was decided in overtime, on a missed John Vaughn field goal attempt. Auburn stopped LSU at the 4 yard line in a 7-3 win, in 2006. Matt Flynn hit a TD bomb with several seconds to go in 2007, to lift LSU to a 30-24 win. In 2008, Jarrett  Lee connected with Brandon LaFell on a catch and run, for a late score to put LSU ahead, 26-21. Will history continue?

As always, feel free to chime in, and cheer on the Auburn Tigers! War Eagle, and beat LSU!