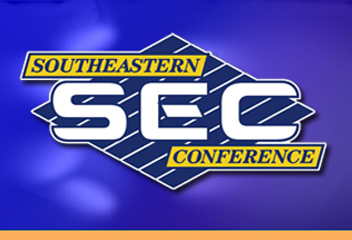 Early last week, the same SEC officiating crew who allegedly blew both a late celebration call that helped LSU beat Georgia and a phantom personal foul call that helped Florida beat Arkansas was suspended for two weeks by SEC commish Mike Slive. Perhaps smelling blood in the water, some other SEC coaches decided to pile on after Saturday's games, questioning some calls made during some heated conference games.

Vanderbilt's Bobby Johnson, probably the most diplomatic coach in the fracas, took issue with a 35-yard TD catch by South Carolina that showed the receiver's foot on the line:

"I'm not saying anybody's doing anything subversive or anything like that, (but) in my opinion (Moore's) foot clearly was on the line after he bobbled the ball. After he had possession, his left foot was in the air, his right foot was on the line. I don't know what kind of evidence you need for those overrules. But to me, that was fairly clear."

Upon hearing that he might not be the only coach to want to speak to SEC coordinator of officials Roger Redding, Johnson said:

"I think I'd have to get in line.I haven't been in contact with (Redding), but I'm going to give him a call. I'd like to find out what the discussion was up in the booth about (the touchdown catch). It will be interesting to find out."

Next up at the Wailing Wall was 1st-year Mississippi State head coach Dan Mullen, who's Bulldogs gave Florida a game until a 4th quarter collapse that included a controversial interception return for a TD by the Gators. LB Dustin Doe, who was showboating as he neared the goal line, might have actually fumbled before the ball broke the plane. The original call was not overturned by replay official Dan Dembinski.

"I don't even know why we have replay right now in the Southeastern Conference if they're not going to utilize it", said Mullen. "I hope he's (Dembinski) severely punished if he ever works another SEC game again, because I think it's completely unacceptable."

Mullen was reprimanded by the conference yesterday. The SEC said it will not comment further on the call and Mississippi State spokesman Joe Galbraith said that Mullen would have no comment on the SEC's actions against him.

But perhaps the most moaning comes from Community Organizer Conference Agitator Lane Kiffin, who received his second reprimand from the conference this year, moving him into possible double-secret territory with Dean Wormer and Commissioner Slive. Kiffin received his first even before the season began, accusing Florida coach Urban Meyer of recruiting violations. A third reprimand could lead to a possible suspension for the 1st-year Tennessee coach.

Kiffin's frustration came after Alabama DT Terrence Cody blocked his second Vol FG in a row, sealing the Tide victory as time ran out. Cody then removed his helmet in the ensuing celebration, drawing Kiffin's ire about the lack of a flag for unsportsmanlike conduct, forgetting that it was a dead ball foul that wouldn't have mattered a hill of beans with the change of possession, assuming also that time didn't run out. Kiffin was equally upset about other questionable calls, perhaps leading him to go for the field goal on 4th down rather than 3rd, and with no time remaining:

"You run another play and you throw an interception or they throw another flag on us -- I wasn't going to let the refs lose the game for us there and some magical flag appear," said Kiffin.

The central theme of this controversy for all you conspiracy theorists out there seems to be a willingness on the part of SEC officiating crews to make the calls for Florida and Alabama, who are ranked 1 and 2 in the polls, setting up a historic SEC title game that in the absence of any other national contender, may possibly be replayed in Pasadena for the BCS title. Although the officiating fix idea is totally preposterous, there seems to be some subscribers.

"I'm sure we'll get one of those letters that really means nothing as Bobby (Petrino) got last week, but Florida and Alabama live on," said Kiffin on Sunday.