A Halloween Brunch with the Rebels

Share All sharing options for: A Halloween Brunch with the Rebels 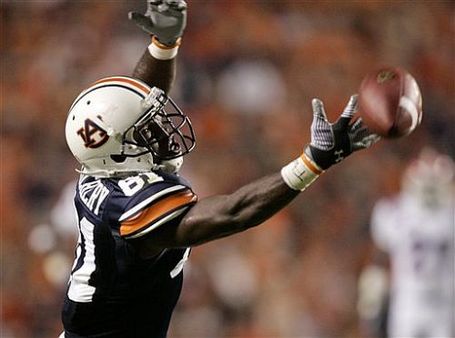 Get open and grab it, guys!

War Eagle, everybody! It's time to carve up those pumpkins, and get ready for a tough early (11:21 AM CDT) contest with the Ole Miss Rebels. Due to leap year calendar gymnastics, Auburn has not played a game on Halloween since 1998: an ill-fated visit by the Arkansas Razorbacks which Auburn lost, 24-21. The sixth starting Auburn center of the year, and a true freshman quarterback fumbled a 4th down and inches snap on a potential game-winning drive. Auburn has six wins, six losses, and a tie on Halloween, all-time. This year, Auburn faces an Ole Miss team that was greatly hyped in preseason. The Rebels disappointed early, but came on strong last week with a big 30-17 win over Arkansas.

It's taken over a half a season, but the Ole Miss offensive brain trust seems to finally have figured out that they need to put the ball in the hands of their most explosive player, Dexter McCluster. The speedy 168 pound wide receiver/tailback hung 260 offensive yards on the Razorbacks last weekend, and earned the SEC Offensive Player of the Week award from the league office. Besides McCluster, the Rebel offense has strong-armed quarterback Jevan Snead, and a host of capable wide receivers. At times, Snead looks like Joe Namath. At times, he can't throw the ball in the ocean. Last week, Snead got hot, and lit the Arkansas secondary up for 332 yards. While Snead can be streaky, McCluster is not. The senior has a career yards per carry average of 5.86, and a 13.9 yards per reception average. In conference losses to South Carolina (15 carries, no catches) and Alabama (6 carries, 3 catches), McCluster wasn't much of a factor. Even in the win over Vanderbilt (7 carries, 2 catches), McCluster was not frequently used, and the result was a lackluster win. Against those three SEC opponents, the Ole Miss offense scored an average of 12.0 points. Against Arkansas, McCluster had 7 catches and 22 caries, and Ole Miss scored 30 points. Auburn HAS to keep an eye on McCluster! It would also help if if Snead is back to his earlier accuracy levels.

If there was a bright spot to take away from the Auburn beating in Baton Rouge, it was the play of defensive end Antoine Carter, and linebacker Eltoro Freeman. For the first time all season, Auburn had pass rushing threats from both sides of the line, and some great run support. Yes, there was a 69 yard TD run given up in the 3rd quarter, and Freeman was pancaked by a guard on the play, but the secondary let that run go the distance. For Auburn to return to the defensive production of the mid-Tuberville era, we've GOT to rush the passer, and attack enemy runners. The LSU game was the first sign of a pulse in those areas we've seen, all year.

Auburn Defensive Production (yards and points given up.)

As the table above clarifies, allowing more than 4 yards per rush leads to huge problems. It's no coincidence that as Auburn passed the 4.0 barrier, our record has plunged to 10 wins, 10 losses. Our record before 2008? 59 wins, 18 losses.

The Rebel defense may not be as deep as LSU's, but the starting front seven are arguably more talented. Ole Miss gave up 22 points to Alabama, but held Arkansas to 17, South Carolina to 16, and Vanderbilt to seven points. I'll be shocked if the Auburn offense suddenly "gets well" and puts up early-season numbers. For Auburn to have a chance on offense, the wide receivers MUST be involved!

I was somewhat amused this week to discover a "Hate Week" thread up on SB Nation Ole Miss blog, Red Cup Rebellion. Evidently, a cadre of Ole Miss fans are STILL stewed at Auburn for hiring Tommy Tuberville away from their school 11 years ago. I wasn't a big fan of grabbing another SEC school's head coach, at the time. Now, Tuberville is gone, but the taint is still there. That worked out about as well as we knew it would.

I'll continue this morning's discombobulated ramblings with my take on "referee-gate." Do I think that SEC refs are involved in some sinister, carefully crafted plan to set Alabama and Florida up in the title game? In a word, no. I have posted the catch-phrase "Rogers Redding's Buffoons" many times before, and I fully believe that this season's mistakes in officiating are just the latest episode in a comedy that takes place every year. I'm a proponent of accountability in all things. We rarely see ANY consequences from the SEC office for bad calls. Coaches are reprimanded and put on double-secret probation for complaining about calls, but the league's policy remains "keep quiet," as far as officiating blunders. There's supposedly an evaluation of each game official's performance, but who sees the report? Not the press. Not the players. Not the coaches. The same guys are back, year after year. It's rare for the league to even admit to a wrong call, despite overwhelming video evidence. This year has been unusual in that a crew has finally been suspended. Not just the official who made a game changing phantom call, but the entire crew. That punishment is ridiculous. It's making the whole class stay after school for one kid talking in class. It's a spotty whitewashing of a deck full of rotten wood. "See, we DID do something about it, right?" I think the league office should publish the scorecards. Set standards, and consequences for not meeting those standards. The process should be transparent, not shrouded in secrecy and denial.

It will be an early game Saturday, against the Rebels. As always, we'll have an open thread up at TrackEmTigers.com, and welcome everyone's insights! War Eagle, and beat the Rebs!