Tigers Hold Off the Vols!

Share All sharing options for: Tigers Hold Off the Vols! 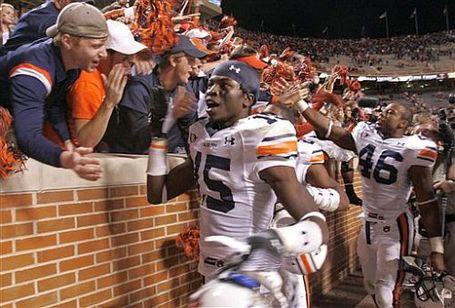 Neiko Thorpe and Craig Stevens celebrate with the Auburn fans, after beating Tennessee, 26-22!

War Eagle, everybody! It's time once again, for the Acid Reign report, on Auburn's excellent 26-22 victory over the Tennessee Volunteers, in Knoxville! In football, the game's often about fortune, particularly the bounces of that prolate, elongated spheroid. Tennessee came up on the short end of luck, repeatedly. The newspaper folks in Birmingham believe that despite the final score, the game wasn't even close. I disagree. Auburn left two fumbles on the ground, but the ball bounced the right way, and Auburn kept it. Chris Todd had an interception overturned on replay, and had several more ducks chucked up into the night air in Knoxville that fluttered fortuitously to the turf. Meanwhile, the Vols suffered through numerous just-off-the-hands passes that were incomplete. When Jonathan Crompton lost the handle on a ball, there was Josh Bynes for Auburn, to set up a field goal. Don't get me wrong, though. Auburn came in with a great plan, fought hard, and deserved to win.

Offensively, Auburn faced a tough challenge. Tennessee's Monte Kiffin used some Tampa-2 looks, but also used a bewildering array of blended coverage, and opportune blitzes. UT did a good job of adjusting AFTER Chris Todd would check off. This resulted in Auburn running the play clock down MUCH more often than in past games. Finally, I think it got to the point that Auburn just started running the play that was sent in, no matter what. I was particularly worried about Auburn's chances of running the ball, in this one. Bart Eddins did an admirable job filling in for suspended starting guard Byron Issom. A somewhat simplified blocking package helped, and Tennesssee's vaunted D-line was slowed down sufficiently for Auburn to churn out 459 yards of offense. Tennessee was determined not to give up the big play, and with Eric Berry back in the secondary, Auburn was equally determined not to turn it over to him. The Tigers needed to play a turnover free game, and thanks to those lucky bounces, did exactly that.

Defensively, this game was a mixed bag. Auburn attacked the line of scrimmage well, causing trouble in the Vol backfield. Tennessee had plenty of big plays, including 5 runs of more than 10 yards. But, Tennessee could not string together a series of 4 to 5 yard runs that could move the chains. They had to rely on the arm of Jonathan Crompton, and with a sub-50% completion percentage, the Vols could not mount enough scoring drives. I suppose I have not scouted Crompton well enough, this season. He's gotten a ton of unfavorable press, but I don't think he played that badly, overall. His receivers didn't help him, at all. Crompton was not sacked, and did not throw an interception. While he wasn't terribly accurate on his short to medium throws, if it gets to a receiver's hands (or backside, or their helmet!), the receiver should catch it! Auburn's focus was to stop the run, and make Crompton be patient, and it worked. Barely. If Tennessee had caught the ball better, we might all be writing about a tough Tiger loss.

Special teams took a giant leap forward this week, with no major mistakes, and some actual excitement on the kick return unit! All is not well, of course. Tennessee ripped the kick coverage unit for 25 yards per return, and we had a couple of shaky-looking punts. I think, though, that we're really working on directing punts away from return men, and UT managed only one nine yard return, on 6 Auburn punts. Wes Byrum continues to be amazing, and his leg was the difference in the ball game. While UT's Lincoln was missing a chip shot field goal and getting an extra point blocked, Byrum was busy nailing 4 of 5 field goals. Byrum had his first miss of the year, but big deal. It was a 46 yarder. You're going to miss those, occasionally.

Grades, after the jump!

Defensive Line: C. I will admit that this unit did a pretty fair job in gap control most of the time, setting up the linebackers to make plays. Otherwise, it was an anemic performance, highlighted by a non-existent pass rush. The defensive line made a total of six tackles (2 for loss), and one quarterback hurry. That's NOT going to cut it in Fayetteville, next week!

Linebackers: B+. Josh Bynes and Craig Stevens had superb games, combining for 20 tackles. Eltoro Freeman, despite playing nearly every snap, was pretty much invisible. Had one quarterback hurry, no tackles. The other two guys controlled the line of scrimmage on most plays, hurried the QB twice, and even broke up 3 short passes. If we can continue to tackle at the point of attack, October might not be such a bad month for Auburn, after all!

Secondary: C+. There were WAY too many Tennessee receivers wide open underneath, and too many missed tackles that allowed short plays to become big gains. Auburn basically had Tennessee shut out, in the first half, till Zach Etheridge let the tight end get behind him. A safety can't do that, PARTICULARLY in prevent defense, near the end of a half! Neiko Thorpe and Walter McFadden were less effective than usual, in coverage, but both made up for it with good run support. Darren Bates had a nice game, with six solo tackles, as well. Several sure interceptions were dropped in this game.

Punting: B+. We punted six times, once off of a trick play pooch attempt by Chris Todd. The trick didn't really work, and the ball hit for a touchback. Clinton Durst's average looked good at 43.6 yards, but he's not hitting the ball as solidly as last season. We're getting lucky rolls on those things. Tennessee went after Auburn's protection scheme, and did not get there for any blocks! It wasn't very pretty, but you have to be pleased with a 40.6 yard net.

Punt Returns: C. Anthony Gulley got a chance to redeem himself this week, and let 'em both hit and roll, the second was downed at the Auburn 17. Exit Gulley, enter Phillip Pierre-Louis. PPL had two returns for only 9 yards, and added two fair catches, and let only one short punt hit the ground. This was the best return man performance of the year, by far! PPL made good decisions, and hung onto the ball in traffic. This is exactly what we need, going into the meat of the schedule! We now have a return guy, let's try to get at least a block or two, next week, in the return game.

Kick Returns: A. Auburn showed a spark, this time. UT's first kick was a squib, and Eric Smith turned the corner for 14, just before the half. The second half opened with a STRONG 35-yard tackle breaking effort by Ben Tate. McCalebb weaved through traffic for 39 yards on the next one. Then McCalebb rocketed 52 yards on the last one, and nearly broke it for the TD! We're starting to get actual blocking on these, and it's becoming a strength!

Kickoffs: D. Morgan Hull hit the ball pretty well early, kicking the first one 4 yards deep in the end zone, but weakened with each subsequent kick. The last two only reached the ten, and seven yard lines. A 65 yard average is respectable, and we had no out of bounds deals. Coverage was spotty, as usual, for the most part. Tennessee was getting an effortless 25+ yards, every time, till Jay Wisner stood up Oku for only 14, on the last kickoff. Tennessee averaged 25 yards per return.

Placekicking: A. Wes Byrum had his first miss, from 46 yards, but hit everything else. Byrum had 3 chip shot field goals, a 43-yarder, and hit both extra points.

Offensive Line: A. When you run for 224 yards, and put up 459 total on a Monte Kiffin defense, you're doing a tremendous job up front! We had just a couple of protection errors on stunts, and one false start. This was a super effort, and great job filling in by Bart Eddins!

Receivers: B. It was another solid effort blocking downfield, but our guys struggled to get open against some shifting coverage, and made a few wrong route adjustments. Tennessee doubled our outside guys on most plays, so there wasn't much opportunity, there. There were only six Auburn receiver corps catches, in the game, 2 by Adams, 2 by Zachary (including the game clinching TD on a quick hitch/blitz beater that T-Zach took to the house!), and one apiece for Trott and Wisner. Had one ball that hit Trott's hands, but it was an awkward throw. Kodi Burns dropped a sure first down pass right in his chest. Darvin Adams saved Todd with a tremendous catch on an air-ball thrown up for grabs.

Running Backs: B-. Ben Tate had a powerful game running the ball, but had a fumble in the red zone, his second of the year. Onterio McCalebb ran well, too, with some tough inside yards, but had a couple of notable gaffes in blitz pickup, and dropped a touchdown that might have made it a blow-out. McCalebb added 62 receiving yards, giving him 113 offensive yards. Mario Fannin made some nice blocks, and had a good field-stretching 32 yard run. Off the bubble screen, though, he usually could not make the first man miss. Had one 16 yard reception on the throwback pass, but the other 5 catches produced only six yards. Fannin also dropped a couple of balls.

Quarterback: A. Chris Todd didn't exactly light 'em up, in this one, and had a few throws that Tennessee might have picked off. But, Todd did a great job of managing the game, and kept Auburn out of numerous bad plays. Even with a half dozen dropped balls this time, Todd hit on 19 of 32, for a respectable 6.8 net yards per pass. Todd showed tremendous poise and reflexes under pressure, avoiding a number of sure sacks with miraculous dump-off passes. Todd's lone miscue was a mishandled snap in the red zone that Onterrio McCalebb covered. Kodi Burns continues to run the Wildcat for tough yards, and made a great throw to Fannin on the wide receiver reverse/throwback.

Auburn did exactly what they had to do, going into Knoxville. They disrupted Tennessee's bread 'n' butter running game, and continued to generate offense. The special teams stepped up, and played pretty close to a complete game, for the first time all year. It wasn't always pretty, and Tennessee came roaring back in the end, but the Tigers held on for a 26-22 win. They don't come often in Knoxville, as this is only Auburn's third win in Neyland Stadium in the past 30 years. With the win, Auburn is 5-0, and has equaled their wins from last season. The offense is only one point shy of its total points, in 12 games last year!

From Tennessee, I think most of us were looking for widespread buffoonery from Lane Kiffin and his players, but we didn't get much of it. Yes, there were drops, and receivers not looking for the ball. But for the most part, Tennessee looked like a well-prepared team, with a good plan, and great effort. It's way too early to write the Kiffin era off. If Tennessee can cut down on mistakes, they'll beat a lot of folks down the stretch, this year.

Next week, Auburn faces a big challenge on the road in Fayetteville. Arkansas has a great quarterback in Ryan Mallett, and their receivers will not drop balls like Tennessee's did. Auburn will have to play well, and continue the offensive onslaught, to have a chance to win. It's great to be an Auburn Tiger, folks, and thanks for reading!