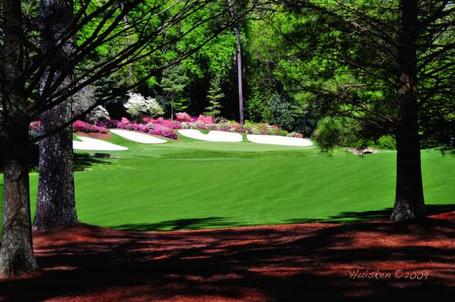 Quick-- how many times this decade have we eagled both holes of our own Amen Corner? Quick--when was the last time we lost four in a row to Georgia? For the former, if you count 2000 as the first year of the season decade, we've won both games three times. For the latter, you have to look all the way back to 1948, the tail end of a five-game long losing streak to the Dawgs (but game five in a 9-game non-winning streak). What are the prospects of this young team trying on the Green Jacket after both these games? Let's check out our upcoming date in Athens first.

If you're an Auburn fan, Amen Corner is the equivalent of Christmas for Santa Claus and UPS, April 15th for the IRS, and Black Friday for shopping malls. It's your season--boiled down to two sequential games. No team in the nation has as big a tandem of games to conclude their season as we do. How long have they been the last two games on our schedule? You'd think forever, but actually, the streak (excepting a make-up game with LSU in 2001) only goes back to 1964--right after the time we started playing Georgia in a home and home.

Back in the 1950s, we liked to throw in a OOC game between the two, like Florida State or Clemson, or maybe a conference foe like the Gators. If you go back too far, don't forget that we didn't pick the series back up with Alabama until 1948, so really we've only had our two biggest historic rivals on the schedule for the last 60 seasons. So how many times during this interval have we won both of these games? Eighteen times--almost one third. Not bad, considering the competition--the number one and number three teams in the conference, all-time.

What kind of impact can winning both have on your season?  Shug had eight of those, Dye had four, and Bowden and Tuberville each had three. All four of Dye's correspond with the four split SEC titles he won in the 1980s. How fitting for the man who applied the apt Augusta phrase to our season climax. For Bowden and Tubs, most of those Amen Corner championships resulted in a trip to Atlanta--we were on probation in '93, missed in '95, went in '97, went in '00, went in '04, and missed in '05. As you can see, birdying the last two holes gets you in with the conference elite in a given year.

So how does an Auburn fan approach the first hole of Amen Corner? Generally, a little softer than you do the last one. MOST fans of both schools will tell you that it's a respectable rivalry. It's civil, but that in no way should belie how intense it is. A shared history of over 200 games with both Georgia and Georgia Tech make Auburn a combination 3rd rail or 5th Beatle of Peach State football, especially considering that those are the only two FBS teams in the whole state--the 10th largest in population in the country. Seems that there's plenty of room for another team, and that team has always been us. Growing up in the Columbus, GA area, both Jay Coulter and I can attest to the fact that THE definitive CFB team in west Georgia is the Tigers. Hell, maybe the loveliest village on the Plains should have been in Georgia, had the Hooch made about a 25-mile bend further west. Actual or honorary, we Auburn folk will take our lofty status in the east, as we have sown, plowed and reaped the fertile recruiting soil there for decades.

And don't think that the Georgia folk have forgotten that, especially this week, as the Dawgs have moved on from their most bitter out of state rival (Florida) to their most familiar one. Country cousins or not, they're going to look to stuff us hard and extend their winning streak to four in a row--someone that I haven't seen in my lifetime. It's hard to say how the average Georgia fan would rank their top 3 rivals: Auburn, Georgia Tech and Florida. I guess it depends on the decade. Since they've been losing to the Gators so much the last two decades, they're probably the biggest rival for the Dawgs, especially considering their dominance of Tech since Mark Richt's arrival.

So where does that leave us with them? Still stuck in the middle, perhaps. Although I'm not sure when Auburn was Georgia's biggest rival, there can be no doubt that they are firmly implanted as our number two, especially now that our rivalry with Tech has been dormant for so many years. There was a time, in the 40 and 50s, when conference foe Georgia Tech was our biggest rival, back when the Alabama series was just reestablished and growing in intensity. And of course, Georgia would have been our second biggest again, too. Always there. Always vigilant.

So keep that in mind this Saturday, for our old foes the Bulldogs, our original partner in being the harbingers of football in the deep south. For most Auburn fans, they're our vice-rival. For for loyal Tiger fans trapped behind enemy lines, they're probably the arch-foe!

Coming later this week: Last year, I talked about the top 5 most significant Auburn-Georgia games in the last 20 years. This turn, I'll talk about the top 5 best that I have personally seen in the stadiums!