Confrontation Between the Hedges!

Share All sharing options for: Confrontation Between the Hedges! 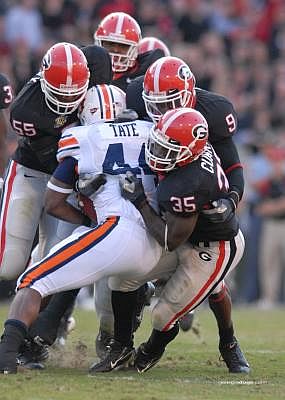 Ben Tate is DETERMINED to have a better trip to Athens, this time!

War Eagle, everybody! It's Georgia week as Auburn travels to Athens, for a 7:00 PM EST kickoff against the Bulldogs. The game will be televised on ESPN-2. As has been well-documented, Auburn has a winning record in Athens, and has a great chance this week to win. There has been a theme in those Auburn wins in Athens, that has been common: an improving Tiger unit taking it to a slumping Bulldog team. That appears to be the case again this year, although a statistical analysis shows plenty of cause for alarm for the Tigers.

Since Pat Sullivan won the Heisman in 1971 in Athens, Auburn has gone 12-6 between the hedges. The first win came in 1977, a 33-14 win over the only Vince Dooley team to finish with a losing record. Auburn linebacker "Fast" Freddie Smith smothered the Bulldog attack. Dooley's 1979 squad lost their first three games, and against Auburn, lost quarterback Buck Belue early. The Tigers cruised, 33-13. In 1983, it was the clash of two top ten ranked teams, and Auburn handed Georgia their only loss of the year, 13-7. In 1985, the injury bug derailed a promising Bulldog season down the stretch, and Auburn won 24-10. The 1987 Bulldog squad was a good one, but they could not get a consistent pass rush on Jeff Burger, (nor could their line deal with Tracy Rocker!) and fell 27-11. In 1989, Auburn started off anemic on offense, and shaky on defense. It was coming together late in the season, though, and Auburn squashed a slumping Ray Goff team 20-3. In 1993, Georgia had an electric offense with QB Eric Zeier, but could not stop folks. It was no different against Auburn, as the Tigers stormed to a 42-28 win. In 1995, the Bulldogs faced a disappointed Auburn team that had redoubled their efforts to finish strong and get to a New Year's Day bowl. Georgia was hurting in Goff's last season, and was down to wide receiver Hines Ward playing quarterback with a broken hand, and taking mostly shotgun snaps. Auburn survived in Athens, 37-31. In 1997, a rested Auburn squad exploded on Jim Donnan's team for a 45-34 win. In 1999, Auburn caught Donnan's team reeling after a loss to Florida. Auburn charged to a 31-0 halftime lead, and cruised to a 38-21 victory. In 2001, Gator burnout had struck again, as first year coach Mark Richt tried to run it with only seconds remaining and no timeouts. Auburn held, and the clock ran out on Georgia, 24-17. The 2005 Auburn – Georgia game was a wild affair, with Auburn converting a late 4th down pass for huge yardage, and kicking the game wining field goal with only seconds remaining. It was the last Auburn win over Georgia, 31-30.

Georgia scouting report, after the jump!

Georgia limps into this year's contest with a 5-4 record. While that mark would tend to indicate that the Bulldogs are a middle-of-the pack team, statistics point out some real problems with this Bulldog squad. Auburn has turned in a Jekyll and Hyde type season. When the Tigers are good, they are very very good. But when they are bad... Georgia and Auburn both rank near the bottom of the league in scoring defense, as both squads are giving up over 26 points per game. Georgia ranks 7th in total defense, while Auburn is 11th. Bulldog opponents have feasted on Georgia turnovers and mistakes. When Auburn has the ball, the situation on paper looks grim for the Bulldogs. Auburn is 2nd in the league in scoring offense, while Georgia is 7th. In total offense, Auburn is tops, while Georgia is 10th. Looking at pass efficiency on offense and defense, more problems are revealed for the Bulldogs. Auburn's 3rd ranked pass efficiency offense matches up well with Georgia's 11th ranked defense. When Georgia has the ball, it's the 7th rated attack against the 7th ranked defense. Georgia is next to last in rushing in the league, while Auburn is 2nd. The Bulldogs cannot afford for this game to turn into a track meet!

In my preseason preview, I had concerns about many of the matchups in the Auburn/Georgia game. To date, several Georgia units have under-achieved, while Auburn has had over-achieving units, and the outlook now looks different. Georgia's defensive line has improved from last season on pass rushing, but has had less success in stopping the run. They face an Auburn line that has become one of the best in the SEC. The Auburn rushing attack has been better than anyone could have guessed, but Georgia's linebackers are the strength of the team. Auburn's passing attack has been less consistent, and was downright awful during a three game losing streak, but appears to have bounced back. The Tigers will attack a Georgia secondary that has only picked off 5 passes on the season, and has only 12 pass breakups. Defensive coordinator Willie Martinez will be under the gun, this week. If there's a silver lining for Georgia, it's that teams that play read and react have done better against the Malzhan attack, than teams that are blitz-happy.

Special teams have been a mixed bag for both teams, although Georgia doesn't have a glaring weakness like Auburn does at punt returner. Kickers Wes Byrum and Blair Walsh have had nearly identical seasons. Neither has missed an extra point, and both are 13-14 on field goals. Georgia is about 4 yards better on kickoff distance, but has shockingly given up slightly more yards per return than Auburn. In net kickoffs, Auburn is averaging 39.7, and Georgia is averaging 41.2. Punting is a huge advantage for Georgia. While Auburn's Clinton Durst has a pedestrian 40.3 yard average, Georgia's Drew Butler is booming the ball for 49.2. Auburn has done a better job of keeping it away from punt return men, though. In net punting, it's Auburn 35.4 yards, Georgia 41.2. On punt returns, Auburn's left the ball on the ground at least a half dozen times, and has run backward even more. Auburn is dead last in punt returns, at 3.8 yards per return. Georgia counters with Prince Miller, who averages 12.7 yards per return.

Early on, my worst fear about this game would be that the Georgia offensive line might dominate a suspect Auburn front. For much of the season, that fear looked accurate. The addition of defensive end Antoine Carter to the mix in the LSU game has really shored the Auburn line up, in recent weeks. The Tigers are giving up 4.4 yards per rush for tenth place in the league, but can Georgia take advantage? The Bulldogs are 11th in the league in rushing offense. The culprit in Georgia's struggles is offensive line injuries. The Bulldogs have lost a couple of starters, and are playing with a lot of nicks and bruises. It's been a mix and match line for the Bulldogs, all season. It will still be a formidable challenge for the Tiger D, but I like our chances far better now, than I did in August!

Auburn's linebacker concerns in the preseason have been realized on the field, but incredibly, all three starters seem to be healthy, and playing their best football of the season, going into this game. Georgia runners have largely disappointed, this season. True freshman Washaun Ealey has emerged as the starter at tailback, averaging 5.1 yards per carry.

Georgia's A. J. Green has emerged as the best receiver in the league, but he's seeing a LOT of blanket coverage. Expect Auburn to hound Green with two defenders, and force Georgia to throw elsewhere. Georgia leads the SEC in throwing interceptions, with 14. Auburn's secondary is a concern. While corners Walter McFadden and Neiko Thorpe are solid, Auburn starts true freshman free safety Darren Bates, and sophomore Demond Washington at strong safety. It will be only second game Washington has ever played at safety. The starting Auburn secondary has 6 interceptions, and 19 pass breakups on the season.

While Georgia has had injury and turnover problems, nothing has hurt the Bulldogs worse than penalties. Georgia is the most penalized team in the league, taking 77 yards per game. Auburn isn't much better, getting flagged for 58 yards per game, good for 9th in the SEC. I think the SEC officials are making fewer and fewer calls, in recent weeks. With all of the furor generated about bad calls this season, those guys might not throw a flag all day.

For Auburn to emerge victorious in Athens, they must force Georgia into mistakes in the backfield, take care of the football, and attack the Georgia secondary. If Auburn is successful in all three areas, they will win. As always, we'll have an open thread up here at TrackEmTigers.com, and will welcome everyone's opinions! War Eagle, and beat those Bulldogs!