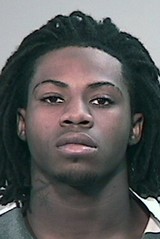 Early this morning, three University of Tennessee freshmen, Janzen Jackson, Mike Edwardsand Nu'Keese Richardson, were charged with the attempted armed robbery of three individuals at a gas station in Knoxville. They were arrested along with the female driver of their car, Marie Montmarquet, who was also charged with posession of marijuana and drug paraphernalia.

Three men were sitting in a car outside the gas station convenience store waiting for a friend when two individuals wearing black hoodies opened the car door, brandished a pistol and told them "give us everything you got". When the victims showed their empty wallets, another man approached the would be robbers and told them,"we've got to go". The three then got into a 2010 Toyota Prius driven by the woman and left.

The call went out to police and they promptly stopped the car on Neyland avenue, near the campus. A search of the car found an air pellet pistol under a seat, two black hoodies within plain view, and a marijuana grinder and marijuana on the driver, Montmarquet. She admitted that the drugs belonged to her. Police then drove the suspects back to the gas station where the victims identified Edwards and Richardson as the two who attempted the robbery. Edwards and Richardson are being held on $19,500 bond while Jackson is being held on $15,000 bond.

Richardson was a standout recruit from Pohokee high school in Florida, and was the impetus for Lane Kiffin getting in trouble for accusing Urban Meyer of recruiting violations. Richardson had verbally committed to Florida, but switched to the Vols on national signing day. After the fact, Kiffin accused Meyer of wrong doing when he learned that Meyer had called Richardson while he was on an official visit to Knoxville. No such rule exists barring that.

Richardson's high school, Pohokee, also blasted Kiffin for remarks he made about the schooland barred him from stepping foot on campus until he apologized. Said Kiffin about the school:

"Someone at the school was going to screw it up. The fax machine wouldn't work, or they would have changed the signatures - all the things that go on in Pahokee. For those of you who haven't been to Pahokee, there ain't much going on. You take that hour drive up from South Florida, there ain't a gas station that works. Nobody's got enough money to even have shoes or a shirt on."

Kiffin eventually apologized, but one must wonder now if this incident, the first involving the arrest of any Vol players, is simply karma catching up with the outspoken coach. Reminiscent of the remarks earlier this year that he made to a South Carolina player who committed to Columbia, that he might wind up "pumping gas for the rest of his life like all the other players from that state who had gone to South Carolina", you gotta think that it's not a half bad alternative to working on a chain gang.