Not Your Daddy's Trip to Sanford Stadium?

Share All sharing options for: Not Your Daddy's Trip to Sanford Stadium? 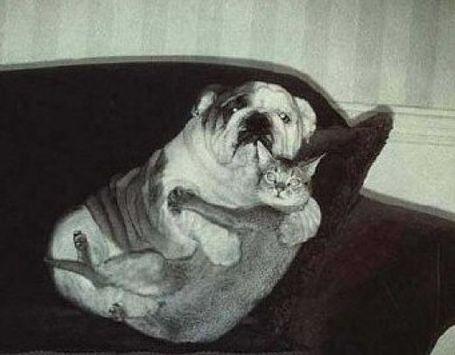 Stroll through the tailgating grounds of Auburn and you might catch glimpse of visiting fans passing through, winding their way through campus to find their way to Jordan-Hare. Most start out around Toomer's Corner and hit the bars and restaurants there before making their way to the game. Auburn isn't really known for their bar scene, most of the action is at the tailgate--something generally off-limits for the invading hordes. I had a similar M.O.  Saturday in Athens with my Georgia friend in tow. After securing tickets near the stadium, we hiked off campus to hit some bars, all with plenty of time to kill before kickoff. After liquoring up, we began our trek back across campus, through the arches and down party row. It was there that I saw something that absolutely amazed me--so many tailgate parties actually had Auburn people there with them. Talk about Dawgs and Cats living together--and partying. Wow.

Even groups of people traversing through the scene all seemed to be compiled of an integrated fan set--Georgia fans with a token Tiger, a group of War Eagles walking with some Dawgs. Amazing! Was I only noticing it because I, too, was with a friend who wore opposing colors? I was even trying to meet up with two female friends from college, and they were both there with groups of Auburn and Georgia fans. How could this be, fans of two teams of the oldest rivalry in the deep south being so, so, chummy? Outside of close relations, you would never see Gators and Dawgs, or Dawgs and Jackets mixing it up, would you? And Tigers and the Tide? Forget about it. But there's something downright civil about Auburn-Georgia. Like family reunion kind of kindred.

Don't get me wrong. All of this magnanimity ends at the stadium gate. You may not even sit next to your red-clad friends. Some people can't be around opposing fans--even on foreign soil. I've had it easy my previous seven trips to Athens. I sat in the Auburn section every time--even twice when I was there as a guest of Georgian fans. The tickets may not have been located where we sat, but we crowded in just the same. That's not really an issue when you're young. You just do it. You don't care. As you get older, you have to care, and you don't want to piss anyone off--especially a fellow Tiger. It's been since the 2001 game in Athens since I've been behind enemy lines--bowl games not counting, being neutral sites. You need the support of your peeps around you. It's hateful to be a lone ranger sitting alone, surrounded by infidels. And with that in mind, I made a special effort to find tickets in the visitor's section.

Georgia seats 'em in the corner of the end zone by the bridge there in Sanford Stadium. Just look for the band. I think they take half our allotment, but that's perfectly fine. We need them, and we bring all of them--all 380 of them, as they announced. My Georgia fan friend lives about 20 minutes outside Athens off HWY 316. I picked him up and as we got back to that divided highway to finish the jaunt into Athens, we got blown off the road by the Auburn band motorcade in about 15 buses--all being escorted by Alabama State Patrol cars. And since my friend, a state police officer in Georgia himself, informed me that the Alabama cars actually had no jurisdiction for running traffic, we decided to join in the motorcade. Squad cars would block off intersections at traffic lights and we would roll on through. It's times like these that I wish my car horn tooted War Eagle. We followed them all the way into Athens where finally some local police picked up the escort. Since they DID have jurisdiction, we decided not to push our luck and veered off.

I had been warned by plenty of folks about the parking situation in Athens, but I had no choice but to wing it. I'm simply just not there enough to know the secret spots where you can get in and out in a hurry. Even almost four hours before game time it was a madhouse. We had to park in a parking deck out near the intramural fields. Since we took the campus bus in, we didn't really realize the 2-3 mile distance to the stadium. The UGA campus is huge, and it's not co-mingled with the surrounding town like Auburn is. There is a definite distinction between the two. And nowhere is this distinction more apparent than having to walk off campus to hit the bars. But since there are few lengths I won't go through for alcohol--especially on game day--we made the trip to go have a great time.

It was while in a little bar off the main drag where I had my War Eagle moment that weekend. An Auburn couple around my age and their two children came in and sat down close to my friend and I. I struck up a conversation with the husband. As it turned out, they had also made a few trips into Athens for games. After a minute or so, I started to think that the woman looked real familiar. All of a sudden, it dawned on me that she was the former Cindy Holland of Dothan, the first female SGA president we ever had at Auburn, back during my tenure on the Plains around 1987-88. Now I had never known her personally, but I remembered her face. I then also remembered seeing an article about her recently in Auburn magazine in a where are they now segment. Her mouth is wide open as I'm telling her about herself, as my powers of recall hit full tilt. "You were the first female SGA president" "You're an attorney now, aren't you?" Finally, she gives me a big look of disbelief and says "My husband put you up to this, didn't he?" After a second and realizing that her husband was right there with us and couldn't have possibly fed me any information, we all got a big laugh about it. Where is a camera crew when you really need them?

But Tiger fans abounded in town that afternoon. I think that Auburn fans travel outside the state well, and I think our finest showing is probably in Athens. There were Auburn folk everywhere just off campus, but I was really amazed at how many Tigers were tailgating amongst and with the Dawg fans. That really makes my blue and orange heart beat proudly to see that. Maybe it's because I'm a native Georgian, or maybe I'm just an appreciative Auburn man who feels the kinship of our most respected rival. Being an amiable person, I spoke with and joked around with many Georgia fans before and during the game. I had forgotten just exactly how hospitable Georgia fans are--especially to us. For me, being there in Georgia's backyard was more than being part of an icon of southern football, I was there as an ambassador for Auburn. And it felt good--for most of the evening.

Obviously, the outcome of the game wasn't what any of us Auburn folk wanted, but we at least got a good close game. We had taken the crowd out in the first quarter, but I knew that they'd be back--and they were. Even I was screaming at the top of my lungs on that final drive and we had the ball. Our team never quit and we were proud of them. Like Jay mentioned yesterday, this 2009 team has mended and re-won the hearts of Auburn fans, and we're with them for the long haul. I thought that one thing I could do to be a better fan is to take some road trips to some other SEC haunts in the future. I've never been to Knoxville or Baton Rouge, or any of the Mississippis, and I think I'll try to hit them. But they'll still probably never match the magic of Athens. War Eagle!