How to Win The Iron Bowl.

Share All sharing options for: How to Win The Iron Bowl. 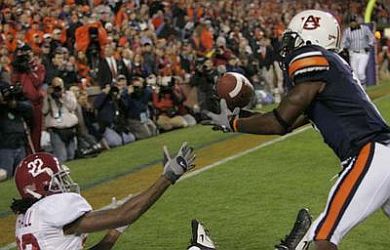 Bama's last visit to the Plains didn't go so well!
War Eagle, everybody! Like the Auburn football team, I've taken a few days off from college football. For the team, it was all about the fatigue. Auburn has played 11 straight weeks in a row. Only Vanderbilt has it worse. The Commodores will have played 12 in a row, when this season ends. They'll be rewarded by a 2-10 season, most likely. For me, the time off has helped me purge the taint of a bad weekend all around. Auburn's loss was painful, but I salute the effort of a fatigued, undermanned squad. I can't say the same for my Dallas Cowboys. When the first frost hits, the Cowboys' collection of superstars and veteran free agents pack it in. Who would you rather have pulling the strings: Bobby Lowder, or Jerry Jones? Things could be worse, Tiger fans!

After some well deserved rest, it's time to gear up for a visit by the Alabama Crimson Tide. Many Auburn folks I've talked to this week are already conceding a Tide win. I say that it doesn't have to be that way! Auburn can play with anyone, when they are executing well. The Tigers can beat Bama, if they run the ball, stop the run, and don't turn the ball over. The Iron Bowl last year was a tight game, till Auburn handed Alabama the ball 3 straight possessions in the 3rd quarter. We can't do that, this year at home!

Keys to Auburn victory, after the jump!

Auburn needs to effectively rotate defensive linemen. There was a Zach Clayton sighting in the Georgia game, and here's hoping he's healthy for the Iron Bowl. We need to rotate both the tackles and ends, and keep them fresh for Bama's 4th quarter push. If we have Antonio Coleman and Antoine Carter playing every snap of the first three quarters, we won't be able to stop Bama in the 4th with the game on the line.

At linebacker, Auburn SORELY needs Eltoro Freeman back. It's no coincidence that Georgia outscored Auburn 31-10 after Freeman left due to injury. With Freeman, Auburn stopped the run. Without him, Georgia moved the chains. Craig Stevens, and Josh Bynes need to have career games. Auburn's linebackers must attack, and shut down Bama's running game.

Rotation in the secondary will be important, too. Safeties WILL have to come up and make tackles, in this one. Bama gets a lot of successful blocks out of their receivers, tight ends, and fullbacks. While I applaud the efforts of young Darren Bates and Demond Washington, we need meaningful snaps out of Mike Slade and T'Sharvan Bell, too. Neiko Thorpe MUST keep his man in front, this game. Alabama WILL try a few play-action bombs at Thorpe, and he's GOT to be ready! If Bama tight end Colin Peek returns for this game, I wouldn't be surprised to see Alabama throw some passes in the flat to him. Auburn safeties will have their hands full trying to cover Peek. Walter McFadden must continue his excellent play. Last season in the Iron Bowl, McFadden limited Julio Jones to 3 catches for 36 yards. If Jones is held to 36 or fewer yards this year, Auburn has a great chance.

Clinton Durst needs to have a great game in this one. His numbers may not be helped, but he should avoid punting the football where Javier Arenas can get it. Arenas is averaging over 13 yards per return. A 35-yard kick out of bounds is an improvement over letting Arenas possibly break the game open. Likewise, this might be the one game where I'll approve of the squib kickoff strategy. On returns, we've got to find some way to keep Demond Washington fresh for these. Did you know that Bama is dead last in the SEC, in kickoff coverage? Bama averages 38.6 net yards per kickoff, which is even worse than Auburn's 39.7.

Auburn's offensive line will have a tough task in this Iron Bowl. Bama has three HUGE defensive linemen, and big backups as well. All three linemen nearly DEMAND a double team block, then Bama usually sends an outside linebacker (Eryk Anders, Cory Reamer) as a rush-end. You don't know till the snap which side that end is coming from. The double team on Terrence Cody is probably inevitable, with the other guard pulling, for Auburn. I'd expect Alabama to attack Andrew McCain, who's been very vulnerable to the speed rush this season. On passing downs, McCain MUST get that first step back with the correct foot, and get his shoulders turned. On run downs, he's got to get his head across. Auburn must get the front four blocked, to get the running game going. Bama is number one in the league in run defense, giving up only 2.4 yards per carry. Please! No false starts or illegal shifts! Lastly, if we've got 3rd and 1 or 4th and 1, we've GOT to STOP trying to pull linemen!

Guess which Bama player leads the team in tackles for loss? Would you believe that it's Javier Arenas? Nick Saban LOVES him some corner blitz! Arenas is tied for 3rd in the SEC, with 10.5 tackles for loss. How do they DO that? Well, safety Mark Barron slides over when Arenas blitzes. Barron has 7 pass breakups and 4 picks, which ties him for the lead in the SEC in passes defended. Justin Woodall, the other safety isn't bad either. Auburn needs some sort of "automatic" check when Arenas slides down the line just before the snap, both the receivers AND Todd. Bama always tips it, a second or two before the snap, AFTER you've meercatted to the sideline and changed the play. Auburn needs a two man route and quick throw underneath, to defeat that Arenas corner blitz. No one blends coverages like Alabama. Auburn's going to HAVE to be patient, and rely on crisp throws under the coverage. The Tide defends from the inside-out. To attack that, you've got to throw successfully to the outside. Auburn's greatest offensive failure in last year's Iron Bowl was only TRYING two passes to the sideline. Bama will bait quarterbacks into trying deep balls. Chris Todd must choose his times carefully.

For Auburn backs, it's really simple, this game. Eric Smith and Mario Fannin have to block like they've never blocked before, and Ben Tate and Onterrio McCalebb have to run like there's no tomorrow. Extra hard fought yards move the chains, and are the difference against really good defenses like Alabama. There won't be big holes and lanes. The backs are going to have to create. Above all else, Auburn must hold onto the ball no matter what! A deep interception is kind of like a punt. But even a single fumble in Auburn's own end of the field could lose the game.

Chris Todd, this is it. This is your big chance! Todd has had an amazing story this season, coming back from the brink to lead this team. It's been an up and down year, but now Todd can cement his legacy. If Auburn beats the Tide, Todd will go down as a legend. Todd needs crisp, accurate throws, and must avoid throwing into coverage. We'll certainly need that 5th year senior maturity and leadership, in this tough ball game.

In other strategy notes, I'm not sure we need to run the Wildcat at all. Alabama has a series of defensive packages for it, including a two deep zone that still manages to overload the sweep side of the formation. A counter might work against that, but a Kodi Burns lob ball against that zone could be disaster. One thing I'd like to see occasionally is a flipped offensive line, and a Todd half roll to the right. With Ziemba out front, and McCain somewhat protected by the motion, Todd can do some damage throwing to the right, especially on the wide side of the field. I'm not sure about the hurry-up offense, in this one. I think it backfired, last week. We got tired on the line faster than Georgia got tired on defense, it looked like. Bama's not really a team you can wear down, defensively. We need to run some reverses to Fannin, Zachary, and McCalebb. Bama will not likely be vulnerable like some teams, but we need those plays to keep the Tide defense honest. Defensively, we've got to use more run blitzes. We're not going to be able to sit back in cover-two all day with Josh Bynes dropping in the middle. Bama will run it till we stop 'em.

It's soon to be Iron Bowl week, folks! I'm fired up already! I'm looking forward to a great week of analysis and fever pitch!