Saturday's Win Is Another Step In The Right Direction

Share All sharing options for: Saturday's Win Is Another Step In The Right Direction

Former Auburn coach Pat Dye likes to say that one of his favorite teams was his first one, the 1981 Auburn Tigers. Unless you are old enough to remember them, chances are you know little about this team that appears as nothing more than a slight mention in the Auburn Media Guide.

They only managed a 5-6 record, but they were gritty and always came to fight. There wasn't a lot of talent, but there was a lot of heart. Dye likes to say that team laid the foundation for the future of Auburn football. Fast forward 28 years and we're seeing similar qualities in the 2009 edition of Auburn football.

Saturday's win was not a work of art. But considering the rainy and overcast conditions combined with the expectations of another lopsided SEC loss, Saturday looked and felt like a masterpiece. You can't help but feel this team is laying its own foundation for another great Auburn run.

What can we make of this Auburn team? Does it even matter? Football is fun again in East Alabama. Confidence has been restored after another October to forget. Quarterback Chris Todd has found his arm again and defensive end Antonio Coleman looks more like Quentin Groves every day. Ben Tate is letting Alabama's Mark Ingram grab the spotlight while he grabs the yards. How long will it last? Who knows?

Don't try to rationalize it. Don't look for explanations.  Just enjoy it for now. Gene Chizik's bunch may score 70 points against the Paladins of Furman next Saturday. Or they may struggle deep into the third quarter. They may go to Athens in two weeks and treat Georgia like they are back in Jacksonville wearing those ugly Halloween uniforms. Or they may not show up at all.

Take this season for what it is. Chizik is laying the foundation. There will be good days and bad. Let's choose to look at the cup as half full. Auburn is going bowling again. The season will not end on the Friday after Thanksgiving. More important than the bowl bid is the additional month of practice time they'll get in December.  It's all about laying the foundation. Looking at it in that light, you can't put a measure on how big Auburn's victory was Saturday over Ole Miss.

The neck injury suffered by Auburn defensive back Zac Etheridge against Ole Miss Saturday afternoon was one of the scariest I've ever witnessed. As you've undoubtedly heard by now, he's out for the rest of the season. The good news is that Etheridge is expected to make a full recovery.

If there was anything good that came out of the play, it was the sportsmanship displayed by Ole Miss player Rodney Scott. If you watched the game, you'll remember Scott lying under Etheridge following the play, somehow sensing that Etheridge was seriously hurt. Scott did not move a muscle the entire time medical personnel attended to the injured defensive back.

I've seen a lot of good and bad sportsmanship in my day; but this act was by far the best I've ever seen.  We can all learn a lesson from Scott. Here's Auburn coach Gene Chizik commenting on the action... 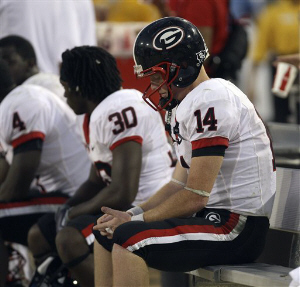 "I didn't want to dress like this for Halloween."

I know Thanksgiving is still a month away and it's a little early to start talking about what we're thankful for, but thank goodness Auburn resisted the temptation to alter their uniforms for Halloween. The "special edition" Georgia and Tennessee uniforms were a disaster.

Rumors were circulating all week on Auburn message boards that school officials were considering allowing the team to wear blue pants against Ole Miss. Can you imagine? Actually I can.  I saw the results in Jacksonville and Knoxville. I give the edge to Georgia for pure ugliness.  The black helmets with red face masks may go down as the worst look in the history of the SEC.  I'm sure even Oregon was jealous.

Maybe someone can explain to me why Auburn officials chose to kickoff this weekend's homecoming game with Furman at 12:30 p.m. CT. With the game available only on pay-per-view, you would figure school officials could start the game at any time.  For fans driving from Birmingham, Huntsville and Mobile, it means another early wake up call. Late afternoon seems like a better fit for fans and local businesses.