Iron Bowl Week is ON!!

Share All sharing options for: Iron Bowl Week is ON!! 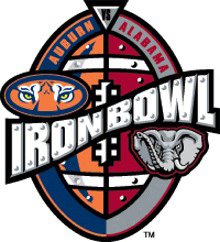 Today starts our shortened Iron Bowl week here at Track Em Tigers. Yeah, not many of us are exactly thrilled to be playing Thanksgiving week, much less on Black Friday. Looks like many a Bammer and Barner will have to put off that shopping spree at Guada La Walmart a few days until we get this thing settled.

About the only positive thing for Auburn coming into Iron Bowl week is that we had an extra week off to heal after the disappointing loss to Georgia. Alabama should come in after their scrimmage with Chattanooga yesterday ready to play, having pulled their starters early. Jay mentioned that an early line for the game might be nine points. I think the Yahoo pick 'emline will be 9-10 points. Normally, a team like ours playing the #2 ranked team in the country would be three TD underdogs, but most oddsmakers know what the Iron Bowl is all about.

Most realistic Auburn fans know what we're facing, but unlike last year, this team at least has a chance to win. Although solid all the way around, Alabama has struggled at times this year with offensive production. Their defense, however, has never faltered and has never allowed more than 24 points in a contest. They are barely second to Florida in scoring defense not only in the conference, but in all of college football. For Auburn to have a chance, we must have one of our top offensive outings of the year and they must have one of their worst, a la the Tennessee game.

Chief among our goals will be to stop Mark Ingram, who has been virtually unstoppable for the second half of the year. Even in the Tennessee game where he was largely negated, he had 99 yards on 18 carries, but was kept out of the end zone. We'll definitely have to repeat that feat as one of the keys to a victory. I would definitely look for Alabama to bring the rush on, with Ingram punctuating the 'best back in the state' claim on his chief rival's home turf. Speaking of which, now that each team has played eleven games, lets look at how they're ranking: (note: SEC-only stats haven't been updated from yesterday yet, so all I have is national)

With one game left to go, it's going to be hard for Ben Tate to catch Ingram, although he might have a shot at Anthony Dixon of Mississippi State, who has come on strong in his last three games with over 500 yards rushing. But wouldn't it be fitting to see a duel between Tate and Ingram reminiscent of the 1986 Iron Bowl where both the Tide's Bobby Humphrey and our Brent Fulwood had a contest for the ages, both accumulating over 200 yards rushing?

So, we'll try to have plenty of threads up this week so you guys be sure to participate, especially with a Fanpost or two. You know the Gumps will be coming over here fully confident, so let's keep it civil and respectable, and if you go over to their house, please do the same. War Eagle!