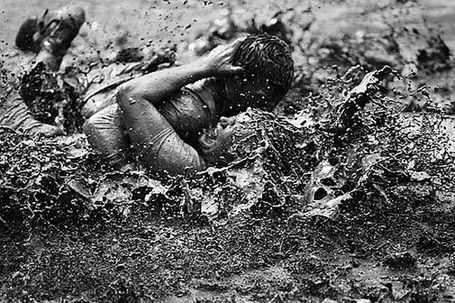 A messy finish to the season might put Auburn in the Pizza Bowl.

Has the SEC bowl picture ever been murkier? The league should secure two BCS bowl bids, and has two teams that didn't qualify. The remaining eight are within a game of one another. Let's sort it out by division, first.

As to the West, Alabama wins with an 8-0 league mark. LSU finished 9-3, 5-3 in the SEC, and clinches 2nd place. Ole Miss is third, with a 8-4, 4-4 mark. Auburn and Arkansas each have 7-5, 3-5 records, and Arkansas won the head to head matchup. Mississippi State muddies the waters further, with a 5-7, 3-5 mark. Since the Bulldogs lost to both Auburn and Arkansas, they fall to the bottom of the division. The West finish looks like this:

The bowl picture requires some comparisons between teams in different divisions. My guesses are based on the idea that the bowls will pick teams by how they finished, but we have certainly seen teams with lesser records moved ahead of teams with more deserving records in the past. An example of this would be from the 2001 season, when the Independence Bowl passed up a 7-4 Ole Miss team for a 6-5 Bama squad that Ole Miss beat head to head. The bowls will likely look at who travels well, in making their selections.

Obviously, the SEC Champion will go to the BCS title game in Pasadena. The runner up will likely end up in the Sugar Bowl. The Capital One Bowl has the number three team, and that would be LSU. The Cotton Bowl gets first pick of the remaining teams in the West, and the Outback gets first pick in the east. That scenario would put Ole Miss in the Cotton, and Tennessee in the Outback. The Peach would get the 6th place team. On paper, that's Georgia. Pick number 7 would be the Music City Bowl. The Music City would get the best of the 4 teams that finished bowl-eligible at 3-5 in the SEC. Arkansas and Kentucky didn't play, but the Razorbacks own every tie-breaker against Auburn and South Carolina. That would seem to put the Razorbacks in Nashville. The Liberty Bowl picks 8th. South Carolina beat Kentucky, and Kentucky beat Auburn. That puts South Carolina in Memphis. The Independence Bowl would then get to pick between Auburn and Kentucky. Kentucky won head to head. That leaves the Wildcats in Shreveport, and Auburn in the Papa John's Bowl in Birmingham. Do Tigers eat Pizza? The Pizza Bowl is on Saturday, January 2, at 2:00 PM. It will be interesting to see how it all shakes out, a week from now!