Weis Out at Notre Dame.

Share All sharing options for: Weis Out at Notre Dame. 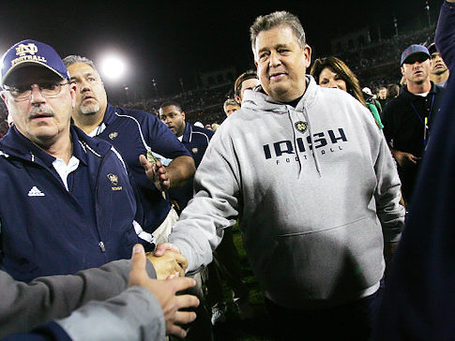 The New York Daily News has broken the story that Charlie Weiss is out after five seasons in South Bend, where he dropped his last four games in a row and finished his career at 35-27. That would give him an even worse record than previous coaches Ty Willingham and Bob Davie. Weiss now claims to have no fewer than six offers for an OC position in the NFL.

Irish AD Jack Swarbrick informed the coaching staff of the decision earlier today. Further pending is the school deciding whether or not they wish to go to a bowl game with a 6-6 record. Player input will be part of that decision, but so will the appointment of an interim coach as well.

Much speculation was made after the Irish's loss to Stanford this weekend, where Weis refused to do halftime and post game interviews with the media. He allegedly also cleaned out his office on Thursday before the team even made the trip to California. Also curious is whether or not QB Jimmy Clausen is done as well, as speculation might have him declaring for the NFL draft after this, his junior year.

Now comes the circus that comes with filling the job that was formerly the biggest in college football. The rumor mill is still burning with one big name--Urban Meyer. Others being circulated thus far are Brian Kelly of Cincinatti, Gary Patterson of TCU and even Butch Davis of North Carolina. What? No Tubs?

In the crazy rumors section, I hear that the Domers *may* make a run at Saban, although I discount that tremendously. Smart money still says that they back a Brinks truck up to Meyer's door, but wouldn't it be funny  for the SEC title game this weekend that the winning coach goes to Pasadena and the loser goes to Notre Dame?