Best Back in the State--And The Conference

Share All sharing options for: Best Back in the State--And The Conference 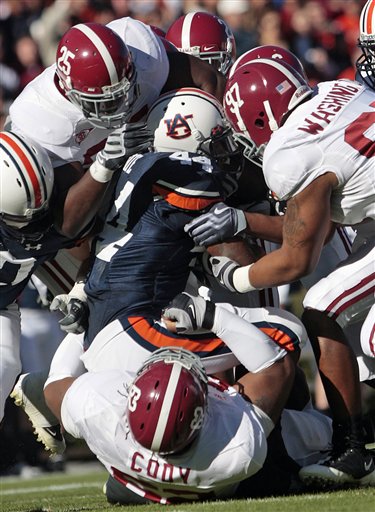 The final regular season SEC conference stats are in and the one we were all interested--best running back--has been decided. Bear in mind that the rushing leader isn't determined by total rushing yards, it's yards per game. Anthony Dixon of Mississippi State missed the first game against Jackson State, so he only had eleven games total, giving him a slight edge in YPG over both Mark Ingram and Ben Tate. It's academic anyway, given that Jackson State was the first game out of the gate for MSU and Dixon would have certainly padded his stats there.

While Tate and Ingram were dueling it out in the Iron Bowl, Dixon not only caught up with Ingram, but Montario Hardesty of Tennessee snuck past Tate to take third place in the SEC. I think it's certain though that if both Auburn and Alabama were interested in padding rushing stats, they would have given more carries to both backs in the late-season scrimmages against Furman and Chattanooga.