Homecoming Week Around the SEC

Share All sharing options for: Homecoming Week Around the SEC 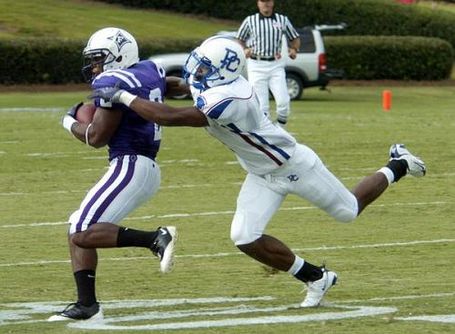 (Green Auburn safeties will have to keep an eye on Mims!)

War Eagle, everybody! It's a lot more fun to talk football after a big win, isn't it? We've reached the home stretch of the 2009 SEC season, and much of the league is hosting FCS and mid-major conference cupcakes, this weekend. Auburn hosts Furman, Kentucky hosts Eastern Kentucky, Georgia hosts Tennessee Tech, Tennessee hosts Memphis, and Ole Miss hosts Northern Arizona. None of those games should even be close, although we'll keep a sharp eye on the Georgia game, scouting the Bulldogs. Will the much maligned Bulldogs struggle against Tech?

There is an important matchup in the early SEC network game, this week. Arkansas hosts South Carolina, and it's a critical game for both schools. Whichever team loses that one will be saddled with the "bust" label, big-time. I'm looking out my window, and yes, I do see red and yellow leaves! That means it's time for South Carolina to start losing games in earnest. For much of the past decade, South Carolina has had fast starts, then major losses in late October and November, to finish as a third-tier bowl team or worse. Arkansas was expected to be a dark horse division contender, and much improved, this season. Alas, entering November, Arkansas is 1-4 in the league. With South Carolina, Troy, Mississippi State, and LSU left on the schedule, the Razorbacks will have to split those games to finish ahead of last season's record.

The headlining matchup this week is LSU at Alabama. Alabama can clinch the Western Division with a win. Only LSU could catch them in that event, and Alabama would own the tie breaker. LSU can take command in the division race with a win, but would likely have to win out the remainder of their schedule to actually win the division. With Ole Miss and Arkansas closing out the end of LSU's schedule, it's do-able, but it won't be easy. Ole Miss or Mississippi State COULD conceivably finish the SEC season at 5-3 and get a share of the division title, but it's unlikely, at best. Auburn could also finish at 5-3, but to catch Alabama, the Tide would have to drop all three of their remaining league games. And if the Tide does that, LSU would get a 5th win, and LSU owns the tie-breaker against Auburn. So essentially, the SEC West is a two horse race at this point, and everyone else is jockeying for bowl position.

Incredibly, every team in the West might go to a bowl, this season! The two Mississippi teams have the hardest road. Mississippi State would have to win two of their last three, against Alabama, Arkansas, and Ole Miss. Ole Miss needs a win over either Tennessee, LSU, or Mississippi State to become bowl-eligible. The Egg Bowl may well determine who sits home for bowl season, this year. Arkansas needs a split in their remaining schedule to make it to a bowl. I think the Razorbacks can do it. Alabama, LSU and Auburn are already bowl eligible.

Net Yards Per Pass revisited, after the jump! (Plus a small Furman preview!)

Into the last stretch of the season, let's revisit SEC net yards per pass, see how the teams are doing, and how it correlates to winning. Vanderbilt's Larry Smith has joined Kentucky's Mike Hartline on the sideline for the rest of the year, so I've included some backups on those two teams.

Ryan Mallett continues to defy gravity, and tops the league. Despite that, Arkansas has not been able to win SEC games against teams not named "Auburn." Tebow is second, and Auburn's Chris Todd is third. At this point in the season, the critical thing in the above stat is taking care of the ball. Every one of the quarterbacks at 6.0 or better has not thrown many interceptions. Mallett has 3 picks, Tebow has 4, Todd has 3, McElroy has 3, Jefferson has 4, and Garcia has 5. By comparison, Jevan Snead has 13 picks, Joe Cox has 12, Tyson Lee has 11, and Jonathan Crompton has 10.

Shifting gears a bit, Auburn hosts Furman at 12:30 PM CST, on pay per view only. The Paladins will enter Jordan Hare Stadium with a 4-4 record. In their only previous game against an FBS opponent, the Paladins were pounded 52-12 by Missouri in Columbia. Furman has a respectable FCS offense that averages 27.6 points per game. In most Furman losses, the defense has been the real issue. Furman is giving up 30 points per game, and over 429 yards. The defense is playing bend but don't break, and has only generated 11 turnovers in 8 games. Teams are screening and drawing the Paladins to death.

Players to watch on the Furman offense include All-Southern Conference flanker Adam Mims, who has 55 catches on the season and a couple of TDs. The Paladins also like to run the reverse to Mims, and he's averaging 8.4 yards per carry. Furman likes get the ball into the hands of this 5'9" receiver. Senior Jordan Sorrells is the quarterback, a 6'2" specimen with a solid arm. Sorrells has 14 TD passes this season, against 6 interceptions. His net yards per pass is 5.7. Keep an eye out for change-of-pace quarterback Chris Forcier, a UCLA transfer. He has yet to complete a pass this season, but he averages 6.5 yards per carry on designed runs.

We'll have an open thread up Saturday, as always. Feel free to drop in and get fired up! There won't be the usual play by play, as I'm going to have to watch the game on the road, due to not having digital cable/satellite! I have to say, this new TV package has been inconvenient. I'm going to have to switch providers, or upgrade, before next season. It drives me crazy for Auburn games to be on TV, and not on channels I get! War Eagle, and let's pound the Paladins!