Auburn Runs Over the Paladins.

Share All sharing options for: Auburn Runs Over the Paladins. 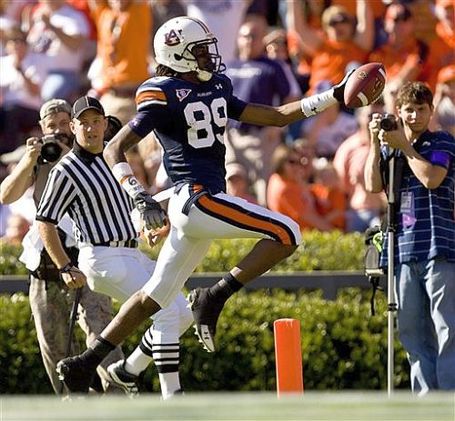 Darvin Adams scores three times, in a 63-31 victory over Furman!

War Eagle, everybody! It's time now for the Acid Reign report, on the Auburn Homecoming Game against Furman. The Tigers took advantage of a suspect FCS defense, and rolled up an easy 63-31 win. Physically, Furman was overmatched against Auburn's playmakers, and it was evident from the opening kickoff. Mario Fannin ran over, through, and around hapless Paladin coverage folk for 35 yards. The Paladins had little luck trying to slow down the Tiger offense, which scored nine touchdowns on the day. After taking a 42-3 halftime lead, Auburn emptied the bench in the second half, playing several players out of position, and fielding a host of walk-ons and reserves. While the Tigers gave up 4 touchdowns in the second half to the Paladins, it was against a hodge podge of defenders. Freshman wide receiver Anthony Gulley played at cornerback, wide receiver, AND at running back, for the first time in his life.

The starting Auburn defense allowed a field goal drive on Furman's first possession, then slammed the door emphatically for the rest of the first half. In that first drive, Auburn jumped offsides twice, and allowed underneath receivers to make catches and run for first downs. The drive finally fizzled when Adam Mims dropped an out route pass at the two, and Furman settled for a field goal. After that, the Auburn pass rush derailed any chance for Furman to score again in the first half. In the second half, a host of freshmen, walk-ons, and guys playing unfamiliar positions allowed 28 points. UCLA transfer quarterback Chris Forcier is a speedy QB specimen, and he gave Auburn's reserves fits. I figure Forcier will start next season, and set Paladin records.

Special teams continue to hurt the Tigers, as has been the case in every game this season. The most glaring error was by punt returner Phillip Pierre-Louis, who attempted to field a fluttering punt inside the ten yard line. Louis attempted an over the shoulder catch at the five yard line, muffed it, and ran himself out of bounds. Furman recovered at the six, and cashed in with an easy touchdown. Louis also signaled "get away," on another punt, then grabbed the ball on the bounce. That cost Auburn 5 yards on a delay of game. We had the best kick coverage of the year, allowing only 21.7 yards per return. 21.7 is not a good stat, but it's a LOT better than Auburn has been doing. The kick distance by Morgan Hull remains mediocre, at best. Auburn averaged kicking it to the 7 yard line. Clinton Durst did well on two punts, averaging 45.5 yards with no returns.

The Auburn offense was stopped only twice, all day. Despite playing nothing but backups in the entire second half, Auburn continued to roll up the yards and points. The 655 yard output is the 4th best total in Auburn history! There was a disappointing fumble by Eric Smith to start the first possession of the second half, but Auburn got it rolling again. Auburn passers Chris Todd and Neil Caudle set Auburn records for completion percentage, hitting on 27 of 30 passes, without a pick, or a sack. The 90% completion percentage goes down in history. I've been tracking net yards per pass all season. Auburn's numbers in this game include 14.2 for Chris Todd, and 9.8 for Neil Caudle. By comparison, Jordan Sorrells managed just 1.4 net yards per pass for Furman. Chris Forcier had a ridiculous 24.0 score, working on a depleted backup Auburn secondary. Auburn runners had a good day, averaging 7.2 yards per carry. If there's anything negative to take away from Auburn's offensive performance, it would be Chris Todd seeming to be locked in on Darvin Adams. Todd fired several in there, against good coverage. Furman pass defenders were pretty hapless, and could do little with the Auburn receivers. Still, one has to wonder how it will work, if Todd attempts those throws against Georgia and Alabama secondary members.

Unit grades, after the jump!

Defensive Line: B+. Most of the points off here are on the starters, for not getting a push on Furman's first drive. On that drive, both ends jumped offsides, too. We were dominant up front, even into the second unit, but mistakes early hold this grade down.

Linebackers: B-. The starters on this unit cut down on mistakes, and showed great discipline in dealing with Furman's option looks. The starters were not nearly as good dealing with middle screens to ace receiver Adam Mims, but Mims is a guy who'd be dangerous on SEC offenses. The backups gave up play after play, in the second half. Considering that it was freshman Jonathan Evans, and a host of walk-ons, that's not so bad.

Secondary: B+. Didn't expect to give a grade this high, but the starters did well. Demond Washington may yet be a liability against the links of A. J. Green and Julio Jones, but he acquitted himself well in his first start against Furman. From the safety position, we had trememdous closing speed from both sides, for the first time all season. It gave veteran QB Jordan Sorrells fits, and held Furman to mostly underneath throws. We gave up some deep passes late in the game, but it was with either walk-on Dbs, or Anthony Gulley playing corner for the first time. I think we really held up well, considering that we have three projected starters out in the secondary. That lineup last spring was supposed to be McFadden and Savage at corner, Etheridge and McNeil at safety.

Punting: B+. A 45.5 yard average with no returns is nice. Clinton Durst hit a great 49 yarder that was downed deep, but rolled a 42-yard pooch effort into the end zone.

Punt Returns: D. Honestly, I should probably give an F due to the horrible fumble inside the five, but I didn't because we showed overall improvement. The fumble was a complete freshman mistake. Aside from that, Phillip Pierre-Louis did a much better job of not dancing, and running that ball straight ahead, this game. While we Tigers are currently satisfied with JUST CATCHING THE DANGED THING!!!!!! you really expect your returner to essentially get you a first down on the return. We didn't do that consistently, but we are heading in the right direction. Kudos to the staff for sticking with Pierre-Louis. Most Auburn return men in recent memory have dropped balls inside the ten in their first season. This includes Robert Baker, Clifton Robinson, Roderick Hood, Tre Smith, and Robert Dunn. We have to get this kid's feet wet, coach him, and stick with him.

Kickoff Returns: B+. We racked up a 24.5 yard average, powered by Mario Fannin's tackle-breaking 35 yarder on the opening kickoff. I would have liked a touchdown against an FCS opponent, but at least we didn't show this unit to be a weakness, against the Paladins.

Kickoffs: C. This is the best grade in weeks for this unit, but one must remember that Furman is a lower division opponent. Morgan Hull's kickoff distance was pedestrian, at 63.5 yards. Furman averaged 21.7 yards per return, a mediocre number. Auburn's net kickoff average was 42.0, which starts the opponent out at the 28. This is much better than previous weeks, unfortunately.

Placekicking: A+. No drama, here. Wes Byrum is 13 of 14 on field goal attempts this season, and perfect on 43 extra points. I don't know if a kicker can make All-SEC on only 14 field goal attempts, but Wes is quietly having one of the best years in Auburn history.

Offensive Line: A. Points off on a Lee Ziemba false start. Lee had a good streak going, but messed up once on Homecoming. I suppose it is the nature of offensive line play, that folks only notice when a mistake is made. Lee Ziemba was just BRUTAL in this game. His monstrous blocks inspired the whole offense, and Auburn absolutely dominated at the point of attack. False starts aside, Ziemba has a chance to go down in history as one of Auburn's best linemen. Most surprising was the play of the backups, who handled the entire second half. Late in the game, Auburn was still protecting pretty well, opening up gaping holes, and providing lots of room for the Auburn backfield.

Receivers: A. Aside from a drop or two on difficult passes, this unit made strides. Early on, it was the Darvin Adams show. Adams has been breaking away from SEC defenders all season. Against a suspect FCS secondary, it was ugly. Even when the Paladins had Adams pretty well covered, he still got the ball, got away, and scored. Tommy Trott made a nice grab in traffic on a ball that shouldn't have been thrown, and it was really great to see the young guys like DeAngelo Benton getting loose and making catches. Downfield blocking was generally solid, too.

Running Backs: A. I'm tempted to count a letter grade off for the Eric Smith fumble, but I won't. These guys ran and blocked HARD. The first man never got an Auburn back down, in this one. Even when we lined receiver Anthony Gulley up in the backfield, with no practice time at the position, Gulley broke a 50 yard touchdown. It's nice to have at least one spot on the team with some depth!

Quarterback: A. Honestly, this grade should be an A+, with no sacks, no picks, 373 yards, 4 touchdowns, and a ridiculous completion percentage! I'm counting off on a few Todd throws into traffic that were caught, anyway. Points off on Caudle dumping short on third and long, on his first possession. I'm basically picking nits on those points. Both Auburn quarterbacks did a great job!

Obviously, no Tiger is happy with giving up 31 points to an FCS opponent with a losing record. Auburn is on pace to set a record for most points given up in a season. The worst unit in Auburn history was Terry Bowden's 1995 unit, which gave up 283 points in 12 games. Through ten games in 2009, Auburn has given up 266. If Auburn gives up 18 more against Georgia, Alabama, and a bowl opponent, Auburn will set a record neither Ted Roof nor Gene Chizik wants!

Meanwhile, the Gus Malzhan offense is on pace to be the best ever at Auburn, from a yardage standpoint. The record for total yards was set in 2004, with 5469. Auburn currently has 4503 yards, this year. Auburn needs 967 yards in their remaining three games to break that record. That's a target average of 323 yards per game. Auburn would have to average 30 points per game against Georgia, Alabama, and a bowl opponent to break the 1995 points record, at 438.

It's now Amen Corner time at Auburn. A road game in Athens, and a Black Friday Iron Bowl await the Tigers. If Auburn can continue the solid play of the past two weeks over in Athens, the Tigers have a great chance to knock of Georgia. Against Alabama, it will take an even greater effort. The Tigers will have an off week to prepare for Iron Bowl madness. Will the time off help, or hurt? Auburn can certainly use the rest, but many teams look discombobulated after a week off. Georgia is on pace to become the worst team in the Mark Richt era, and Alabama has already clinched the SEC Western Division title. Can Auburn win against both? I think it's certainly possible!