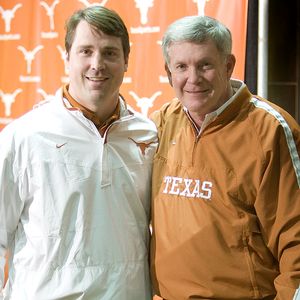 Last week, the university of Texas' regents decided to make Mack Brown the highest paid coach in college athletics by bumping his salary $2M a year to $5M total, running through 2016. This week, the Texas faculty council voted for a resolution declaring the move to be "unseemly and inappropriate" given the current state of the school's budget. The vote was informal, as not enough members were present for a quorum. Not that it made an ounce of difference.

It goes without saying that Brown's salary is paid for out of athletic department funds, which is separate from the academic side, and Texas' department is the highest earning in the nation with over $87M in revenues last year alone. In addition, the department has also donated $6.6M in funds to academics since 2005. Indeed, things are looking up for Mack Brown, and his successor in waiting, Will Mushamp.

But David Hillis, past chair of the council, believes that athletics are "destroying higher education in America". The amount that it donates to academics is far less than the proportion that research grants donate, by comparison. Hillis believes that this arms race of athletic spending cannot be sustained and that schools like UT are responsible for driving up costs nationwide, and that they can either be part of the problem, or part of the reformation.

Look. Athletics are their own little fiefdom on most campuses. As the old saying goes, basketball pays for itself and football pays for everything else. Is it fair for sport to hold so much sway over these large academic institutions? Probably not, but sway they do hold. Another old saying: "it's hard to rally around a chemistry exam". It's probably best to think of athletics as a little side family business--and a profitable one, especially considering that most FBS schools are heavily subsidized by state legislatures.

Would Texas be as successful now under the helm of a coach only compensated half as much as Mack Daddy? That's debatable, but is it not the same scenario as a CEO of a Fortune 500 company? Maybe the whole boardroom is on auto-pilot or maybe the president is flying the whole ship solo--albeit by the seat of his pants. The important thing is that his ass is on the line. Coaches live and die by performance--unlike so many of these tenured professors sitting in their ivory towers. When was the last time someone reviewed their compensation package as it pertains to how much they actually produce, teach or manage. Hmmmm.

If you believe in free markets, you have to trust that the market will correct itself eventually--assuming that it's even off. Yes, some of these escalating salaries are obscene, and so are most of the fees associated with trying to obtain football tickets these days. We all have to vote with our wallet. Maybe that's something that the Auburn AD should consider as they contribute with every increment to the rising cost of watching college football on the Plains.