Share All sharing options for: Hot Dog Time In Auburn! 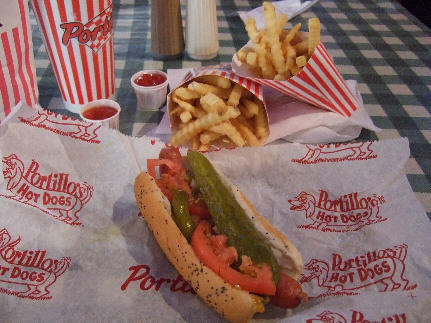 Thanks to Hilary (a.k.a. HMLEE) at the SB Nation blog, The Rivalry, Esq., this year's Outback Bowl will take on more meaning for me. As the Northwestern writer for the Big Ten site, she laid down a challenge this weekend that's hard to pass up. Hilary suggested a friendly wager on the game that involves one of my very favorite things - food.

The bet is simple. The winner receives a catered meal (by mail) from a famous local establishment chosen by the loser.  The dish is to be something regional in flavor and well known among Auburn and Northwestern fans. To say I'm excited is an understatement.

So what do I offer up?  That's been the million dollar question this weekend. The first major hurdle is finding an appropriate dish. After that, it's finding an establishment that's set-up to ship overnight.  That narrows things quite a bit.  Fortunately, I've come up with the perfect solution.

Should Northwestern upset our Tigers, I'm prepared to overnight to Hilary some of Alabama's best barbeque from my favorite place, Dreamland.  Now I know it started in Tuscaloosa, but it has locations all over the state, so I really don't think of it as affiliated any longer with that school up the street.

Here's what she'll receive: 1 slab of ribs, 1 lb. of pork, 1 lb. of hickory smoked sausage, 1 quart of their legendary sauce and 1 bottle of dressing. Also included are wet naps, bibs and a loaf of Sunbeam bread.  To finish it off, I'll throw in a gallon of the finest lemonade in the world from Auburn's very own Toomer's Drug Store.

Does that sound good or what?

What's in it for me?  Can you say world famous Chicago hot dogs?  Hilary has come up with the perfect meal - hot dogs from Portillo's. Here's what I'll be receiving should Chris Todd get it done through the air and Ben Tate on the ground: 10 of Portillo's beef hot dogs with all the fixings. It includes everything you need to create an authentic Portillo's style hot dog including, 10 hot dogs in a cryovac pouch, 10 poppy seed buns, mustard, relish, 1 fresh onion, 2 red ripe tomatoes, 2 whole kosher pickles, sport peppers & Portillo's hot dog seasoning.

I can hardly wait.

After talking with Hilary Saturday night, she seems fairly confident in her Wildcat's chances and even talked a little smack.  "I like Northwestern's chances in this matchup," says the NU law student. "Oh sure I was surprised when they jumped Wisconsin for the Outback, but, unlike some of my esteemed colleagues, I don't think that's nearly as much of a problem as they do.

"Had Northwestern not jumped Wisconsin and instead found themselves in the Champs Sports Bowl they would be looking to a matchup vs. Miami right now. That potential matchup scares me much more than the current one. Sorry Auburn fans, but unlike Miami, you just don't have any wins on your roster that make me quake in my boots. Miami does. Further, Northwestern and Auburn are both spread offenses, so I feel confident that Coach Fitz can get the team prepared to face the Tigers.

"Finally, it should be noted that I also write on Wisconsin and given what Northwestern did to Wisconsin's normally solid defense, I have no desire to see the Badgers up against Auburn. Maybe Miami isn't any better, but I still like their chances more. For all these reasons, Northwestern is going to trounce Auburn in the Outback bowl and I will be ringing in this new year with my very own box of Alabama treats."

You have to give Hilary credit. While somewhat delusional in her love for Northwestern, she's certainly confident. I have a feeling that Antonio Coleman, Darvin Adams, Todd and Tate will hit a little harder and run a little faster than that weak, showboating school in Miami.

Do you smell hotdogs?