Florida Looking For Let Down in Sugar Bowl Like Alabama Last Year?

Share All sharing options for: Florida Looking For Let Down in Sugar Bowl Like Alabama Last Year? 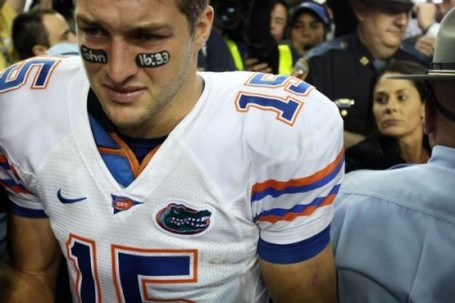 Sure this is Florida's winningest senior class ever. It will be legend Tim Tebow's last game in a Gator uniform. They will be playing in the Sugar bowl, a BCS contest, against upstart undefeated Cincinnati. Yea, I know, it's not Pasadena. Many Gators fans were thinking BCS national championship game all the way this season. Undefeated--something no Gator team has ever done. But a blow-out rematch with Alabama in the SEC CG has put Florida in the same pot as Alabama was last year--in a consolation match in the Sugar Bowl--the de facto home of the SEC CG loser the last couple of years. Hey! This is the Sugar, not the Weedeater Bowl. And this time it's against a BCS opponent (barely), not a Mountain West upstart. But it's Pasadena Lost for the Gators and they might be looking to lay an egg on par with what the Crimson Tide did with Utah last year.

Gator fans, like all fans, seem to be voting with their wallets. Initially given an allotment of 17,500 tickets at $125 each, Florida had roughly 5000 still available as of Friday, a far cry from the immediate sell-outs from years past. This is the school's 19th consecutive bowl game. And it's the SUGAR Bowl (did we mention that?) The usual suspects are trotted out as excuses for the lack of virility in ticket sales. The economy is bad. It's Christmas time. Come on Gators, get up and go (to NOLA).

Don't get me wrong. I've always said that the Gators travel better than any other team in the SEC. And I think the Gators will go to the game en masse. They just may not buy the tickets through the university at inflated prices, not with so many discounted tickets being available on the secondary market. Hey, a fan's got to do what a fan's got to do. It's the University Athletic Association that's on the hook for the tickets. They have to eat what's left, and that could end up being quite the feast with two or three thousand tickets left when it's all said and done.

The original deadline for sales was two Saturdays ago. Then it got moved to last Wednesday. Now there is no deadline. Call now! Operators are standing by. An email was sent out to 500,000 fans stating that there is no limit on the number purchased. And the first 500 callers will receive a free Gator Snuggie complete with a bonus reading light. Okay, I'm just kidding about the Snuggie. But you can keep the reading light as a token of our appreciation. Could you maybe include a Sham Wow? Perhaps bundle them with mortgages and sell them on Wall Street? Throw in a Nobel Peace Prize with the purchase of five or more? Or why not just cut prices? Hmmm.

So does all this add up to a possible anticlimactic ending for Florida against Cincinnati come next Friday night, or will the Gators give Tebow his rightful send off? Do we need another promise speech by Tebow as motivation? Can we expect another address by Corrine Brown? On paper, Florida looks stronger than the Bearcats. Plus, they just got their coach poached by Notre Dame. Maybe Cincy might be a little anticlimactic too, having had the wind knocked out of them and blown clear into South Bend. But they do have something to prove--not only for their program, but for the Big East. That and the fact that they're a pretty damn good football team.

But what will Tebow have to say about all this? It was rumored that he was upset about the lack of intensity in practices leading up to Atlanta by some of his teammates . Will he sufficiently motivate the team this time? Tebow has only lost back-to-back games once in his career--in 2007 against Auburn and LSU. And the Gators severely under-achieved in the Capital One Bowl that year by losing to Michigan. Will that Gator team show up in New Orleans this year and have their captain ride off into an orange and blue sunset?