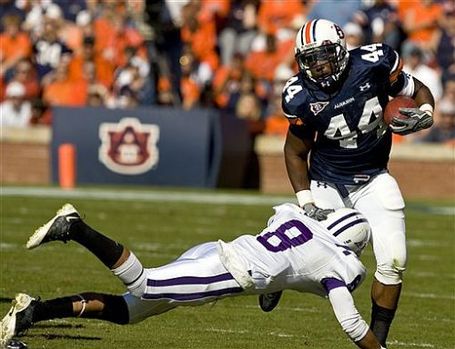 War Eagle, everybody, and Merry Christmas! Here's hoping everyone is gearing up for a great holiday. This is perhaps the one time of year when we can put aside worry, get emotional without regret, be children again, and just plain have fun! Our Auburn Tiger football team has currently broken for the holidays, and we wish them all a great couple of days with their friends and family. On December 26th, it's back to reality for the Tigers in Tampa.

As I mentioned near the end of my preview, the watchword for the Outback Bowl matchup with Northwestern is the weather. We're now close enough to game time to get some long-range forecasts, and it does look like a chance of showers and temps in the 60s. For Big Ten visitors, I suppose it will be like spring time, after the coming Christmas blizzard. For Tiger fans in the Southeast, it's more of the same. Rain, rain, rain.

I'd like to give a shout out to Northwestern bloggers over at Sippin' on Purple. Don't miss their two "fear-o-meter" posts on the Auburn Tigers. It's an amusing analysis of Auburn's offense and defense, and is well worth the read! While I'm handing out kudos, you should also read Jerry Hinnen's account of the New Mexico Bowl which he attended. It's hilarious. I'm definitely borrowing Jerry's "Orc Man" moniker...

Auburn's chances in a mud bowl have taken a hit in the past two weeks. When the weather turns wet, most teams like to run the ball. Auburn has lost both of its blocking H-back specialists in the past week. Eric Smith is not making the trip due to academics, and John Douglas is on suspension for a DUI. Mario Fannin makes an adequate blocker, but the entire depth chart behind him is vacated. The loss of Smith is huge. His blocking has been great this year, and our running game will likely sputter without him. Personally, I'd like to see senior Gabe McKenzie get his first meaningful minutes of the year on offense. Gabe was a pretty good blocker in years past, from the tight end position, and does know how to catch the ball!

Periodically during the season, I looked at quarterbacks around the SEC, and compared their net yards per pass. This is a calculation with a 50-yard penalty for every interception. Chris Todd finished 3rd in the SEC with 7.0 net yards per pass, trailing only Ryan Mallett and Tim Tebow. Applying the same formula to Mike Kafka of Northwestern yields 6.15 net yards per pass. Northwestern backup quarterback, sophomore Dan Persa managed 3.6. There is a lot to be said for veteran senior quarterbacks who are efficient and limit turnovers! Here's a few key statistics from the two teams

Auburn has had a propensity for hitting big plays, and thus enjoys better offensive averages in many areas. Northwestern has been better at long, deliberate drives, playing keep-away from the defense. Northwestern has forced significantly more turnovers than Auburn, and committed a lot fewer penalties.

Keys for Auburn: The Tigers must stop the Wildcats from driving. Northwestern will be patient on offense, and it's critical for the Tiger defense to make some plays and get off the field. That's the best way to keep the thin Tiger defense from wearing down. Offensively, Auburn must avoid turnovers, and continue to generate big plays. When forced to drive, Auburn has had difficulty scoring points. Without big plays, Auburn managed only 10 points against LSU, and 14 against Kentucky.

Keys for Northwestern: Northwestern must be patient on defense, and play assignment football. If Auburn is forced to drive, they typically will make a mistake, a false start, a holding penalty, a drop or a bad throw. On offense, limiting turnovers and moving the chains will be key. Northwestern needs to churn out long scoring drives, keep the Tiger offense off the field, and wear down the Tiger defense.