Postseason in the the SEC

Share All sharing options for: Postseason in the the SEC 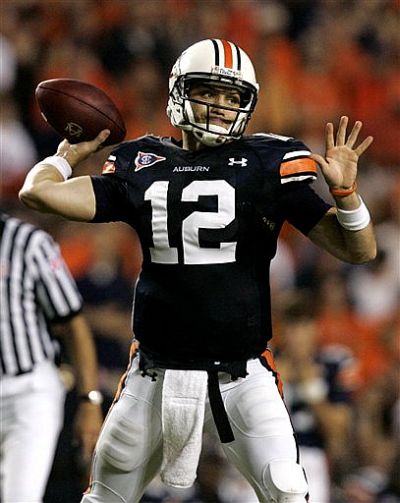 War Eagle, everybody. The postseason of 2009 is on us, and the regular season is over. This time last season, I think most folks were glad it was over. Of course, December 2008 would turn out to be a terribly tumultuous month! We ran a head coach and staff off, at a cost of a cool $5 million. We hired a 5-19 replacement as the new head coach. The program was quite frankly in disarray! We were the laughing stock of the SEC, hands down.

A year later, how'd that work out for us? Against long odds, Auburn's football team won more than they lost, and they won the hearts of the fans. I don't think ANY of us are ready for the season to be over! In just one season, Auburn has vaulted to a New Year's Day bowl, and a winning record. A tremendous recruiting class seems to be in the making. There are 5 other 7-5 SEC teams, and I don't think they are laughing now!

This season, the SEC will send a record ten teams to bowl games. There are some tough challenges facing the SEC. I think most of the nation would love to see the SEC fall off its high-horse and lose big this bowl season. Texas will be a tough test for the SEC Champion, and the loser of the SEC title game will have to lick their wounds and get ready for another rough test. The Sugar Bowl is likely to match unbeaten Cincinnati against the SEC runner up, and if Cincy loses, then undefeated TCU. Penn State will be an extremely tough test for offensively-challenged LSU in the Capital One Bowl. Auburn's sometimes leaky defense will be tested by Northwestern in the Outback Bowl. Might be a record for points scored in that bowl! The Cotton will be a dangerous bowl, as both Ole Miss and Oklahoma State had hoped for much bigger things, this season. Likely bowl opponents in the second tier are Virginia Tech, North Carolina, U Conn, Texas A&M, and the Houston Cougars. SEC teams need to be on their games to match the success of the past three seasons. The SEC has won 19 of its last 26 bowl games.

The net yards per pass prizes, and ruminations on the SEC Championship Game, after the jump!

At the beginning of the season, I examined the net yards per pass of the projected starters in the SEC. Now that the regular season is over, let's see how they did:

Only three quarterbacks managed to finish at 7.0 or above, but every bowl eligible SEC team finished with a quarterback over 4.0 yards per pass. Those that did not attain 4.0 are sitting home for the holidays. It's been an odd year, in that most of the very experienced returning quarterbacks actually had statistically worse years in 2009. Tim Tebow's numbers are still good enough for second place, but he's down a half yard. Mike Hartline and Tyson Lee declined, too. Jevan Snead plunged from pre-season All-SEC 2nd team to 9th place in the league. Snead paced the SEC with 17 interceptions. Long-time backups Joe Cox and Greg McElroy both saw their stats shrink, thrust into starting roles. The winners in the improvement department are Ryan Mallett, Chris Todd, Stephen Garcia, and Jonathan Crompton. Crompton survived a HORRID September, to finish with a respectable 5.5 net yard per pass.

Ryan Mallett performed well enough to cause All-SEC voters to do some head-scratching. Who IS the best SEC quarterback? If you were arguing on strictly an MVP-type basis, you'd have to give the award to Mallett. Without him, Arkansas easily finishes in the West cellar. Looking at what each quarterback brings to the field, Tim Tebow ALONE makes Florida two-dimensional. However, is Arkansas' one dimension better than Florida's two? Total yards tell the tale: Mallett has 3387, and Tebow has 2962. Comparing the teams, Florida put up 5416 yards, and Arkansas 5272. To me, it's a tough comparison. I think if Tebow has a good game in the SEC title match, he'll win the All-SEC quarterback sweepstakes. If Bama's defense makes Tebow look human, it's Mallett's prize. Number three in the league HAS to be a surprise to everyone: Chris Todd. In this context, he's had a pretty amazing season.

I don't have a strong opinion on who is going to win the SEC title game. Both teams sport awesome defenses and good depth. I think Florida is a little better on offense, and a little better on special teams. And, I think Florida has the best player in the league calling the signals. I see another close Florida win, but it's certainly not carved in stone. The DUI arrest of defensive end Carlos Dunlap could be a distraction factor for the Gators. Alabama received a serious wake-up call in the Iron Bowl against Auburn. It could play out differently on the field, than on paper. I can remember ten years ago, a heavily favored Florida team was dismantled by a more motivated Bama group, 34-7. There have been surprising SEC Title game results this decade, to be sure! There was LSU's stunning 31-20 win over UT in 2001, The 34-13 LSU blowout of UGA in 2003, and Georgia's blowout of LSU in 2005. I'll watch this one for fun, as just a fan of the game! And yes, I'd rather see the West win. But I can't bring myself to say the "RT" words...