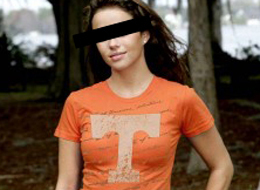 The New York Times revealed yesterday that the NCAA is conducting a wide-ranging investigation into recruiting practices  by the University of Tennessee. Specifically, they concern the use of recruiting hostesses from the school's Orange Pride organization, an ambassador-like club directly affiliated with the university that is comprised of both men and women . They exist on most campuses and help serve as representatives to the school for many events, and also sometimes escort potential recruits in all sports around campus. It seems that the women of Orange Pride have attracted quite a bit of attention to themselves lately for their uncanny ability to successfully land recent football recruits.

The controversy surrounds an unspecified number of visits made by these women to some potential recruit's high school football games this fall--one over 200 miles away. In this specific incident, hostesses are reported to have brought signs that read 'Come to Tennessee'. The NCAA is conducting interviews with four potential recruits, including Marcus Lattimore of James F. Byrnes high school in Duncan, SC, who saw the signs. "I haven’t seen no other schools do that. It’s crazy," said Lattimore. He also described the hostesses as "real pretty, real nice and just real cool." He said he thought they had "a lot" of influence in two of his teammates' commitments to Tennessee. Often times, these hostesses exchange social networking information with recruits, like Myspace and Facebook, or send them text messages.

Since these hostesses are a formal part of the university, these alledged 'off-campus' visits could be considered secondary recruiting violations, if not more. Tennessee AD Mike Hamilton confirmed the investigation, but refused to elaborate further.

This incident marks the sixth time that secondary violations have been reported during coach Lane Kiffin's tenure. The NCAA's enforcement division gets involved if similar incidents continue to get reported. The investigation appears to revolve around if these visits were impromptu ones made by the hostesses, or if they may have been directed by the university in some fashion. Certainly the latter case, if true, would constitute a more serious scenario.

For me, I think the NCAA should clamp down on this pretty hard for all schools. It has the potential to get way out of hand, especially with all the electronic means of communication these days. We've even seen coaches themselves push that envelope. If they had the male hosts doing this, no one would care, but have pretty girls do it and the intent is pretty clear.