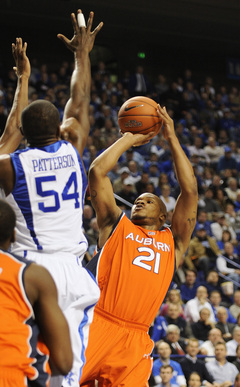 The next four games are huge for Auburn.

Reader sentiment rarely surprises me at Track'em Tigers. This past Monday was the exception. Writing about the struggles of Auburn basketball coach Jeff Lebo, I asked readers to weigh in on whether the fifth-year coach should be fired at season's end. Based on his record, I expected an overwhelming number of you to favor showing him the door.  I was wrong.

Surprisingly, most of you either believe he deserves another year or haven't yet made up your minds.  In our poll, 50% said give him another year, while 20% of you said the jury is still out. After Wednesday night, it appears you know what you are talking about. Don't look now, but an Auburn win over Miss State on Saturday gets the Tigers to .500 in the SEC and all of the sudden they start looking like a factor in the conference race. As Mel Allen used to say, How ‘bout that?

If Auburn is to be a player down the stretch, then Wednesday's 75-62 win over Arkansas should be the model they use the rest of the way. As stirring as last week's win over Tennessee was the glaring weakness was the play of its bench. It got zero points from the guys warming the seats. You don't have to be John Wooden to know that you won't go very far in this league with only five guys contributing.

Lebo and his coaches obviously worked on this leading up to the Arkansas contest. Auburn's bench contributed 26 points in the win over the Razorbacks including six points each from Frankie Sullivan and Brendon Knox. The win was extremely satisfying for Lebo. "I liked the way we did it tonight," said the Auburn coach. "I liked it because it wasn't the so-called stars that did it tonight."

Auburn now stands at 15-9 overall and 4-5 in the conference. The next four games are perhaps the biggest stretch in Lebo's career. After welcoming the Bulldogs on Saturday, they travel to Georgia and LSU before coming home on February 25th to host Ole Miss. With the exception of LSU, these all appear to be winnable games.

Lebo's biggest challenge will be getting senior guard Quantez Robertson back on track. He missed his first start in four years on Saturday after showing up late. While he was back in the starting lineup against Arkansas, he only saw 11 minutes of playing time. Robertson is likely the key to Auburn finishing conference play with a winning record.

On another down note, only 4,300 bothered to show up Wednesday. That's the lowest turnout in more than three years. Auburn will need all the home court advantage it can muster against Miss State. They sit second in the SEC West at 16-8 overall and 6-3 in the SEC.

Tip-off is set for 4 p.m. CT Saturday afternoon. The athletic department is running a Valentine's Special where you get two tickets, two hot dogs, two drinks and a large popcorn for $40. The first 500 ladies through the door get a free rose. I know my wife will be thrilled!

Have a great weekend.