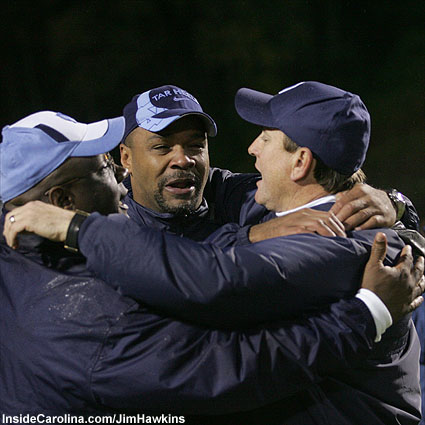 While it remains to be seen whether Gene Chizik can get it done on the field, there's no question he's determined to get it right on the recruiting trail. He continued on the theme of hiring top recruiters yesterday when he hired Tommy Thigpen away from North Carolina. The more you read about Thigpen the more you realize this is a pretty big deal.

First off, it's not every day that you hire someone away from Butch Davis' staff. What makes the hire even more compelling is that Thigpen is a former All-ACC player who suited up for the Tar Heels. Not surprisingly, he's considered to be one of the top recruiters in the South.

You have to give Chizik credit. He obviously knows that to keep his job he's going to have to compete with Alabama, Georgia and LSU on the recruiting trail. He's done his homework and has come up with a staff that should compete with anyone in the SEC.

The only question that remains is whether these guys can coach. Looking at their track records, all signs point to success on the field. Tennessee fans still gush over new Tiger assistant Trooper Taylor and many believe Phil Fulmer would still be walking the sidelines had he made Taylor offensive coordinator a few seasons back.

Chizik says he's always admired Thigpen's coaching ability. "Tommy has had a tremendous amount of success at every stop he's made as an assistant coach," Chizik said. "I've been well aware of him since his days as a standout player at North Carolina and have followed his professional career very closely. I'm extremely pleased to be adding someone with his professionalism and coaching expertise to this staff."

Why would Thigpen leave his alma mater? He says professionally it was the right thing to do. "I'm excited about the opportunity to work at a tradition-rich program like Auburn and for an outstanding coach in Gene Chizik," said Thigpen. "It was a tough decision to leave my alma mater, but this is a great step for me professionally.

"I've known Ted Roof (Auburn defensive coordinator) from his days in the ACC and played for (former UNC and current Texas head coach) Mack Brown so I'm very familiar with the outstanding coaches that are in place at Auburn. I can't wait to get started and look forward to joining the Auburn family."

While Thigpen coached linebackers at North Carolina, he'll be handling the defensive backs at Auburn. Helping him will be a familiar face. Filling out his final spot on the coaching roster, Chizik turned to Phillip Lolley, Tommy Tuberville's former director of NFL relations.

While it's been a while since Lolley walked the sidelines, he does have plenty of experience, but mostly at the high school level. The Butler, Alabama native has run three programs in the state including North Jackson High School, whom he led to the 1993 4A State Championship. During his 10 years at the school, his teams advanced to the state playoffs each year.

"I coached side-by-side with Phillip when I was defensive coordinator at Auburn and it was very evident that he's a great coach," said Chizik. "He's been successful at every level and he will also be a valuable asset because of his strong relationships with high school programs and coaches in the state of Alabama."

For Lolley's part, he says he's glad to be working again with Chizik. "It was a great experience working with Coach Chizik during his previous tenure at Auburn," Lolley said. "He had the nation's top defense in 2004 and I look forward to working with Ted Roof to help return the Auburn defense to one of the best in the country. I'm pleased to be back on the field as part of the Auburn family and am very excited to start back recruiting the great state of Alabama."

Defensive Coordinator Ted Roof will coach linebackers this season. He replaces former Auburn assistant James Willis who defected to Alabama and is now in the witness protection program. The Lolley hire is interesting. You have to think that Chizik was impressed with his work ethic on the recruiting trail. Lolley busted his tail for the program even though there were no guarantees of a job. You have to like that in a person. Now let's hope he can coach.