Is It Possible We Were Wrong About Chizik?

Share All sharing options for: Is It Possible We Were Wrong About Chizik? 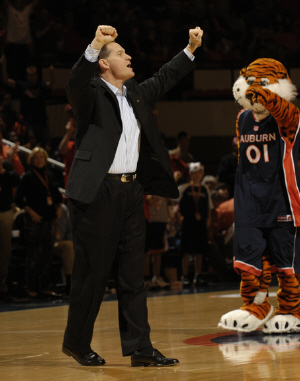 Look for Chizik's hard work to pay dividends on Wednesday.

Gene Chizik's first team has yet to take a snap, but his stock is rising faster than Super Bowl ad prices. What a difference two months makes. Is it possible that Auburn fans overreacted to Chizik's hiring? Should we dare suggest that maybe, just maybe, athletic director Jay Jacobs got it right? The question is too much for most fans to wrap their minds around.

As President Obama embarks on his first 100 days, he could learn a lot from the new guy in Auburn, Alabama. By all measurements, Chizik has outperformed everyone's expectations. He's assembled a coaching staff that appears capable of going toe-to-toe in recruiting with Nick Saban or any other coach in the SEC. The high school talent that has visited campus in recent weeks is some of the best to come through town in years.

What a journey this recruiting year has been.  Tommy Tuberville fires out of the gate and leads the country in number of commitments by late fall only to lose his job at the most inopportune time. Chizik is then hired without the support of nearly anyone in the Auburn family. He responds by somehow managing to hire some of the most talented recruiters in the country. The fruits of his labor and talent appear likely to payoff on Wednesday when high school recruits sign on the dotted line.

If you like fantastic finishes, this is your week.  Auburn is in the running for several high profile athletes and may well have to wait beyond Wednesday to find out how they do. The big prize that awaits is Oklahoma City running back David Oku. An early Tennessee commitment, new Auburn coaches Curtis Luper and Trooper Taylor have now pushed Auburn to the top of the pack.

After visiting this weekend, Oku, the nation's ninth-ranked running back, now says Auburn has a real shot. "I feel like the visit helped (Auburn)," said Oku. "It was such short notice. Coach Luper called and said to come down and see if I liked it. Going down there has given me a lot to think about. I had not been down there in almost two years. It's great to me. The visit really helped out a lot and that's why I'll go past signing day to give it a fair opportunity."

After this weekend, Auburn also appears to be in the running for Army All-American offensive lineman Corey Gaines. The Tallahassee, Florida native appeared headed to Ole Miss until his visit to Auburn. He called the visit to the Plains a "10" and says the Tigers are definitely now in the running.

Auburn coaches want Gaines to switch to the defensive side of the ball, something that Auburn Assistant Coach Tracy Rocker seems to have successfully sold Gaines on. "I'm really confused right now," says Gaines. "I had my mind set on Ole Miss but Auburn is a nice place. Coach Rocker really wants to coach me and he's the best of the best. That kind of threw me for a loop so I just have to pray about it with my family."

Auburn coaches continue to take full advantage of their Oklahoma ties, bringing in Tulsa tight-end Tracy Moore for a visit on the final weekend. Already committed to Oklahoma State, Moore is considered a long-shot to end up at Auburn. Coaches would like to move the three-star athlete to wide receiver. He set a school record this past year with 71 receptions for 1,023 yards and 15 touchdowns. He rated this weekend's visit a "9" and said the primary reason he visited was because of offensive coordinator Gus Malzahn. "I have been knowing about Coach Malzahn since my sophomore year when he was at Tulsa," said Moore. I pretty much know everything. You have got to love that offense he runs. It is hard to stop."

Auburn enters this week ranked 15th by Scout Inc. and 19th by Rivals Inc. in recruiting. Considering where they were in December, this is pretty impressive. Should they sway a few of this weekend's visitors, look for them to possibly move into the top 10 by the end of the week. Give Chizik and his staff an "A" for effort.

You can watch wall-to-wall coverage of National Signing Day on Wednesday over at ESPNU and ESPN 2. Former Auburn coach Tommy Tuberville will be working for both channels, giving his insights into the day's happenings. Go ahead and take a day off, it looks like it may be worth it!