Share All sharing options for: Building Auburn's Mount Rushmore and Ring of Honor 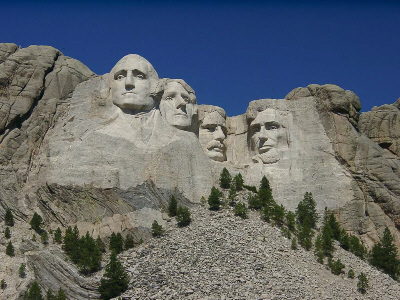 Who would you put on Auburn's Mt. Rushmore?

Unless you've been living under a rock or don't have cable television, you've undoubtedly seen ESPN's recent feature called, "Mt. Rushmore of Sports."  Sports columnist turned television commentator Rick Reilly has been going state-by-state picking his honorees which ultimately will lead to the finale that unveils the National Mt. Rushmore of Sports.

The Worldwide Leader's four inductees for the state of Alabama include Hank Aaron, Bo Jackson, Willie Mays and Bear Bryant. It's hard to argue with those choices. It's ironic that despite Alabama being such a huge college football state, the region delivers two iconic baseball stars to its Mt. Rushmore.

The story got me thinking. Who would Auburn place on its Mt. Rushmore? For me, the four choices were fairly easy, with only the last spot up for debate. So I thought I'd make it a little more difficult and add 10 more slots. We'll call this group the Ring of Honor. The only requirement is that the honorees had to have coached or played Auburn football. It's that simple. So here we go...

Shug Jordan - You wouldn't build the real Mt. Rushmore without George Washington and the same can said for Shug Jordan. He remains the heart of Auburn football. Jordan is the winningest coach in school history and led the Tigers to the 1957 National Championship and is a member of the College Football Hall of Fame.

Bo Jackson - He's widely regarded as one of the greatest to ever play college football. The 1985 Heisman Trophy Winner holds nearly every rushing record at Auburn. Jackson was a two-time All-American and three-time All-SEC running back. He remains the only Auburn back to rush for more than 4,000 yards in a career. Jackson went on to become the first player ever to be named All-Pro in the NFL and an All-Star selection in Major League Baseball.

Pat Sullivan - He became Auburn's first Heisman trophy winner in 1971. Sullivan remains one of the most beloved figures to ever wear the orange and blue. He was a two-time All-American in 1970 and 1971. He led the NCAA in total offense in 1970 with 2,856 yards and set an NCAA record for most yards per play with 8.57. Former Alabama coach Bear Bryant said this of Sullivan, "He does more to beat you than any quarterback I've ever seen."

Pat Dye - There may be some argument around this pick. Many would probably favor Terry Beasley. It's a tough call. But how can you leave off a man that changed the face of Auburn's football program? Dye led Auburn to four SEC championships in the 1980's and is the school's second winningest coach behind Jordan. He also was instrumental in forcing Alabama to travel to Jordan-Hare Stadium. Without question, had Dye not had the success he did in the 1980's, Auburn's program would look more today like Ole Miss than Georgia or LSU.

Terry Beasley - One of only three players to ever have his jersey retired, Beasley is remembered as the best receiver in Auburn history. He was a consensus All-American in 1970 and 1971. During the 1970 season, Beasley led the conference in receiving yards and scoring. Sullivan to Beasley still brings smiles to Auburn faces nearly 40 years later.

Tracy Rocker - He's Auburn's most decorated defensive player in school history. In 1988 he became the SEC's first player to win the Outland Trophy and Lombardi Award. Rocker was a two-time All-American and three-time All-SEC selection at defensive tackle.

Carlos Rogers - He anchored the defense on Auburn's 2004 Perfect Season squad - a unit that led the nation in scoring defense. A consensus All-American, Rogers was awarded the Jim Thorpe Award as the nation's best defensive back during his season campaign.

Tucker Frederickson - Coach Jordan called him, "the most complete football player I have ever seen in the 38 years I have been connected with the game." Playing as fullback and defensive back, Frederickson was a consensus All-American and was named Player of the Year in the South in 1964. He finished sixth in the Heisman balloting his senior year.

Zeke Smith - The All-American guard was awarded the Outland Trophy following the 1958 season as the nation's top lineman. Bobby Dodd called Smith, "the greatest lineman in the SEC in the past 10 years."

Tommy Tuberville - He led Auburn to its most memorable season, the 2004 Perfect Season, going 13-0 and finishing second nationally. He will be remembered most for winning six straight over arch-rival Alabama and winning five SEC Western Division titles. Tuberville is perhaps Auburn's best big game coach ever, earning a reputation for beating top 10 teams at home and away.

Buddy McClinton - He is Auburn's all-time career interception leader with 18. During the 1969 season, McClinton grabbed an Auburn record nine interceptions. He was a consensus All-American at safety his senior year. He started every game in his career.

Ed Dyas - He was Auburn's Mr. Everything during his playing career. A consensus All-American, Dyas set an NCAA record in 1960 for field goals made in a season with 13. Four of those kicks were game winners - all against SEC opponents. He also played fullback and linebacker and finished his career as Auburn's sixth all-time leading rusher. He finished fourth in the Heisman balloting in 1960.

Walter Gilbert - Auburn's only three-time All-American, Gilbert played center and linebacker on the Plains from 1934-36. Then Auburn assistant coach Shug Jordan called Gilbert, "possibly the greatest linebacker-center in the history of Southern football." He was elected to the College Football Hall of Fame in 1956.

Jimmy Sidle - Although he played little during his senior season, Sidle is still remembered as one of the best quarterbacks to ever play in the SEC. He became the first quarterback to lead the nation in rushing with 1,006 yards in 1963. He was a consensus All-American his junior year and remains the only active Auburn player to appear alone on the cover of Sports Illustrated.

Here are a few who came close and would certainly be elected in later years...

So there you have it - one writer's choice for Auburn's Mt. Rushmore and Ring of Honor. It's not easy coming up with the top 14 players and coaches to ever walk the field. Obviously, there are some very good ones left off. I'd like to hear your thoughts on the list and who you would include on it.