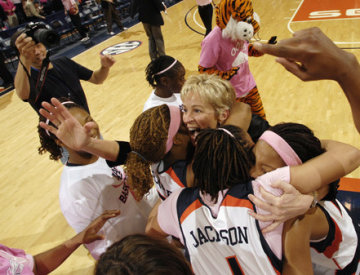 AUBURN - The third-ranked Auburn women's basketball team (26-2, 11-2 SEC) clinched at least a share of the Southeastern Conference regular-season championship Sunday with a 65-59 victory over Georgia (15-12, 5-7 SEC). The win marks the first time since the 1989 season for Auburn to earn the title.

Auburn, who entered the day in a tie for first place with Vanderbilt, clinched at least a share of the title after the Commodores lost at Ole Miss, 71-69.The Tigers can claim an outright title next Sunday at home against Arkansas.

National Player of the Year candidate DeWanna Bonner scored a team-high 22 points. The Fairfield, Ala., native now needs only 41 points to reach the Auburn all-time scoring record of 2,068 set by Becky Jackson. She also pulled down nine rebounds, leaving her with 999 career rebounds.

Auburn connected on 20-of-24 free throw attempts, including nine in the last 44 seconds, to hold off a Bulldog team that gave Auburn its first loss of the season back on Jan. 25.

"When coach recruited us, she always said that's what we're going to do," recalled Bonner. "Of course, when you're freshmen you don't even get to the WNIT. We're like, 'Oh no, coach. We're not going to do this. What are you talking about?' There's Tennessee. There's LSU. But we just stayed with it. Everybody worked so hard this summer.

"Our vision when these seniors were freshmen was that they would win a championship," said Fortner. "We really thought we could do that with this recruiting class. That was always our vision with them.

"A large part of coaching is being able to really get kids to believe in your vision. We have worked hard at that for four years and now we are seeing it pay off. That is pretty fun."

Jackson and sophomore Alli Smalley scored 10 points apiece for Auburn while Boddie again led all Tigers with 9 assists. Boddie leads the nation in assists per game with 8.1.

The Auburn offense started slowly in the first half, hitting only 11-of-34 from the field. The Tigers out-rebounded the Bulldogs, 8-2, on the offensive glass but could not capitalize. Georgia (12-of-26) put up eight fewer shots yet took a narrow 29-27 halftime lead into the locker rooms.

Opening the second half, Smalley connected on a 3-pointer fresh out of the gates, giving Auburn an early second-half lead. The Bulldogs retook the lead twice, but only to the tune on a one-point advantage. Auburn's biggest lead of the first 19 minutes of the second half was a slender four points, but it was all the Tiger's would need.

Bonner connected from the key with 1:24 on the clock. The shot gave Auburn a 56-53 lead and ignited the Auburn crowd of 7,006 - the third-largest crowd ever for an Auburn women's basketball game. The Tigers connected on their final 9-of 10 trips to the line while picking three crucial defensive rebounds to win the contest.

Auburn finished the day shooting 38.2 percent from the field and 3-of-8 from beyond the arc.

Forward Angel Robinson led the Bulldogs, recording her seventh consecutive double-double, posting 17 points and 14 rebounds. Georgia was 26-of-64 from the field, 2-of-11 from three-point land and 5-of-9 from the line.

"Auburn is very, very quick," said Georgia head coach Andy Landers. "They're a lot quicker than us. They mismatch us when DeWanna Bonner is at the five and Angel is guarding her at 17 or 18 feet."

Auburn can clinch the SEC title next Sunday as the Tigers host Arkansas (17-11, 6-7 SEC) at 2 p.m. CT at Beard-Eaves-Memorial Coliseum. The Razorbacks defeated Alabama, 74-69, on Sunday.