Should Auburn Have Been in the East, Vols in the West?

Share All sharing options for: Should Auburn Have Been in the East, Vols in the West? 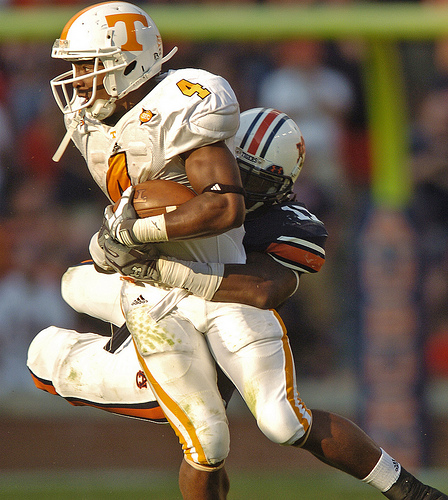 I've alluded to this subject many times over the years, most recently last week with the thread on the prevalent rivals in the SEC. There's never been any doubt in my mind that Auburn should have been placed in the eastern division of the SEC when the conference expansion came in 1992, but I never really thought about how that equation would balance out--i.e: who would play Red Rover and come over to the west. Not until last week while researching historic conference rivals did it dawn on me that Tennessee was the most-likely candidate to have switched to the west, despite Knoxville being east of Nashville and the Commodores. Geography be damned! And even better, this equation balanced, in terms of the division being top heavy or not. Too bad it's only 17 years too late.

Prior to 1992, SEC scheduling requirements were six games, with five of those with permanent, historic rivals and the last game as a rotator. Our permanent rivals ranked in order of importance were: Alabama, Georgia, Tennessee, Florida and Miss State. That meant that the rotators only got played two or three times a decade, hence our low number of games played against some teams we had shared conferences with (SIAA, Southern, SEC) for almost a hundred years, like Ole Miss and LSU. Witness: games played by Auburn against SEC teams through 1991:

So three of our historic Top 5 rivals were soon to be in the opposite division. The new conference scheduling originally was to be one permanent team from the opposite division and two rotators. But Auburn protested so much over the potential loss of two of it's historic rivals that the SEC relented and made it two permanent teams. Auburn made the hard choice that Tennessee would be cut. The rivalry with Florida was considered more important because of the recruiting exposure in the Sunshine State that the game would bring. It still was tough for Tiger fans. For decades we had played the top 3 historic teams in the SEC, Alabama, Tennessee and Georgia, and had more than held our own. That scheduling there is one of the reasons we have earned to date the 4th toughest strength of schedule rating in CFB history.

With the Vols, choices were tough, but not quite as difficult. Tennessee's historic gang-of-5 with games played through 1991 were:

Granted, had you asked Vol fans at the time to rank those same SEC games in order of importance, it probably would have come out Alabama, Auburn, Ole Miss, Vandy and Kentucky. Alabama was Alabama, but the rivalry with the Rebels, Dores and Cats had long ceased to be really competitive. Upstart Auburn was Rocky Top's second biggest rival, a team that the Vols had refused to play at Auburn until 1980, the second last SEC team to come to the Plains.

Add to it the fact that Auburn had moved ahead in wins in the series and it was readily apparent that losing the Tigers would be a big blow to Tennessee. And never mind that the Vols' 2nd and 3rd biggest rivals today, Florida and Georgia, were mere footnotes on Tennessee scheduling prior to conference expansion, with only 21 games played prior to 1992 against each school in 97 years of shared conferences.

Would it have been worth it for the Tigers and Vols to have switched, only picking up Florida and Ole Miss in the process? Seems that such trading would have been a far tougher proposition for Auburn, even know you never would have heard us complain. Balance of power was on the minds of conference officials who were putting together the expansion in the late 1980s, and having the #1 and #4 teams, Alabama and Auburn (according to historic conference winning %) in one division, balanced out with the #2 and #3, Tennessee and Georgia in the other. #5 LSU and #6 Florida were also on opposite sides and who could have predicted both of their meteoric rises a few years later?

So maybe it would have been a good deal for Auburn to do the switcheroo, but maybe not so good for Tennessee. Unfortunately, no other team from the east balances out the equation like the Vols do. Granted, switching now would NEVER happen, but just suppose. Knowing what we know now, that Tennessee-Florida, Tennessee-Georgia, and Auburn-LSU would turn into such great rivalries, could we be selfish to deny the conference and the CFB such great spectacle?