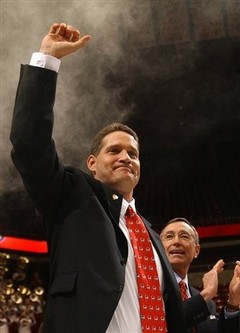 Let's be honest. National Signing Day has to be one of the most overblown events in all of sports. Watching 18 year-old baby faced kids sit at tables teasing audiences over what school hat they are going to pick has to rank up there with the Westminster Dog Show. At the end of the day, it's just stupid.

What's more idiotic is the "star ratings" that Scout Inc., ESPN and Rivals Inc. assign players prior to their senior seasons. Does anyone really believe that a group of guys who've never coached a day in their life can differentiate between the fifth-ranked player in the country and the 75th? How do you compare the 15th ranked running back with the second-ranked tight-end?

And what about the team rankings that so many fans hang their hats on?  At the end of the day isn't this just a preseason poll? Can Ohio State really claim to have the top class in the country without us at least having a chance to see them play? Can you say Leon Hart?

Did Florida have the top recruiting class four years ago? What about LSU five years ago? They certainly had the best teams on the field four years later. We used to joke that if recruiting really meant that much, former Georgia coach Ray Goff would have five national championships and still be coaching instead of selling Zaxsby's chicken.

Somewhere in the middle of this circus is the truth. There's little doubt the Buckeyes, Alabama, LSU and North Carolina had tremendous days. Auburn appears to have had a great day. The same can be said for all of the SEC West. But I'll never be sold on the idea that you can say with certainty that UCLA's class is 11 spots better than Auburn's.  Let's be reasonable. It's safe to say that both signed promising classes - and that's all you can say at this point.

In the days and months ahead, many of these young men will grow into stars. And others, despite having tremendous athletic ability, will find it hard to adjust to being away from Mama and no longer being the biggest fish in the pond.  They will drop out or transfer and not live up to all the hype.  Tray Blackmon immediately comes to mind.

At the same time there are two-star athletes and invited walk-ons who will arrive on campus unheralded, but will work hard and become All-SEC performers, and some will go on to play on Sundays. For hundreds of athletes, Wednesday was the high point of their careers. By late summer those recruiting stars will mean very little and it will be time to perform.  Some will and some won't.

There's no question that Wednesday gave Auburn fans hope. It even put smiles back on the faces of Tiger fans that badly need some good news. And maybe that's the answer to why recruiting has become so big in college football - it gives fans hope.

Gene Chizik and his staff should be all smiles today.  They've restored hope to the Auburn program. Now the hard part begins - delivering on that hope. How will we look back on Wednesday four years from now? That will be determined more by what's between the players ears and in their hearts than some ridiculous star system created to sell magazines and online subscriptions. Following these kids over the next four to five years will be interesting.