Time Is Running Out For Jeff Lebo

Share All sharing options for: Time Is Running Out For Jeff Lebo 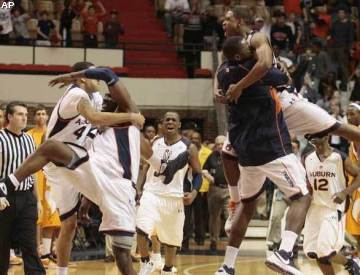 The rumors are true. I saw it with my own eyes. Contrary to popular belief, they are still playing basketball at Auburn. On a day when the crowd was so small in Beard-Eaves Coliseum that fans were on a first name basis, Jeff Lebo's team gave the home crowd all the excitement they could handle. Saturday's 78-77 win over Tennessee gives Lebo hope that his fifth team may finally be showing some life.

With Alabama and Georgia already pulling the plug on its coaches, can Lebo be too far behind? On Saturday you had a sense that his players knew it. Despite appearing to be a foot shorter than the Volunteers at nearly every position, Auburn came out looking much different than the team that was so lethargic losing to Ole Miss last Wednesday.

When Korvotney Barber put the Tigers ahead for good with 4.3 seconds left on the clock, the crowd of little more than 6,000 erupted like they had just beaten LSU in Baton Rouge on a Saturday night. And you know what? It was a hell of a lot of fun. The win reminded Auburn fans of how much fun basketball can be in the dead of winter.

Being a part of the crowd and watching the celebration on the floor, you quickly realize what Auburn people have been missing for all these years. College basketball is a heck of a lot of fun - especially when you win. Sure the new arena, when finished, will be state-of-the art and will take viewing to a different level with all its amenities. But things couldn't have been more exciting Saturday afternoon in that old, run down barn.

Most people have already written Lebo's obituary. As he heads towards Wednesday's home game against Arkansas, he carries a 3-5 conference record and stands 14-9 overall. The NCAA Tournament is almost completely out of the question and an NIT bid is very much up in the air.

All of this begs the question, what chance of survival does Lebo really have this late in the season? Playing in his fifth season, he's yet to land a date in the big dance or even get an invite to the NIT. His best season was two years ago when he finished two games above .500 and finished third in the SEC West at 7-9.

On paper, this appears to be a no brainer. But watching Lebo's teams play you always get the feeling he's one or two recruits away from putting it all together. More times than not, he gives everyone in the SEC a hard fought game. Plus, it's hard not to like the guy. Spend five minutes talking to him and you can't help but pull for him.

Unfortunately, close just doesn't get it. And let's face it, if this was football, he'd have been gone two years ago - right Tommy? Lebo has had every opportunity to make it work and now time has run out.

When Auburn opens the door on its new $100 million arena in two seasons, they need to put a winning product on the floor. New seats and concessions alone will not fill up the stands. Earning back that investment will be the top priority of the Auburn Administration.

It's a good time now to strike while the iron's hot. With that financial commitment being made, the University should have all the tools necessary to bring in a top caliber, name coach this year. Then again, Jay Jacobs could just go out and hire Gene Chizik - but, I digress.

In the meantime, if you are looking for something to do, go check out Auburn basketball. They welcome the Razorbacks to town on Wednesday night and while they may not win, you can bet they'll play hard and compete. After all, Lebo is just a recruit away from making it happen - or not.