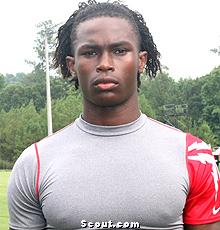 Me and Senator Julio, down by the schoolyard...

It seems that in the recent student government elections in Tuscaloosa, sophomore wideout Julio Jones has won election to a senate seat as a write-in candidate, despite having never campaigned for the position. Conservatives on campus decry: "this has the smell of ACORN all over it."

It just goes to show you how much the electorate in Tuscaloosa really knows. A few years ago, Mike Price won as a write-in candidate for best coach at the Capstone EVER under the platform Never Lost a Single Game to Auburn.

In keeping with Saban's strict control over the media, Julio had no immediate comment, but word from the AD soon came out that Julio would accept the position. The student newspaper, the Crimson White caught up with Julio immediately after the announcement.

Julio, how does it feel to be elected a student senator at Alabama?

It's what Obama was before he became president.

Who's he play for?

Yea, Ron Zook has done quite a job with those guys. He's a great recruiter. He tried to recruit me. Shame they got clobbered in the Rose Bowl by Southern Cal. I almost went there...

It seems that write-in candidates ruled the day on campus. Other winners announced weren't immediately known by university officials: a Paul Bryant and a Michael Shuler (sic?) additionally won senate seats.  Results have still yet to be officially certified.

Jones stated that his first order of business as a student senator would be: "free textbooks for everyone!"

Bolstered by their attempt, student activists have now set their sites on getting Julio elected to American Idol, Dancing with the Stars, and Pontiac Game-Changing Moment. Said Tide bloggers Roll Bama Roll: "We soon hope to make Julio as synonymous as Kilroy and Waldo as far as being everywhere."

We here at TET wish Julio nothing but the best in his senatorial term and hope that next year he might actively campaign for student body president. It would be too rich in irony indeed to have a current Alabama letterman sing War Eagle to us on an Auburn basketball floor...