Share All sharing options for: Saban Rules in Effect Again at Alabama? 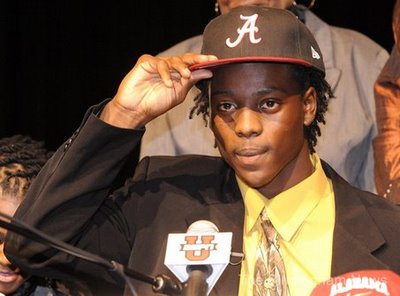 Unfortunately, all that was available when Tide recruit Dre Kirkpatrick announced his decision was an Atlanta Braves cap from a nearby gift shop. Go Bravos!

Birmingham News writer Kevin Scarbinsky recently took Alabama to task for not disclosing to this year's recruits that Alabama was facing a disciplinary hearing with the NCAA from the textbook scandal from 2007.

Although failing to disclose scheduled hearings and possible NCAA sanctions to recruits is not itself a violation of NCAA rules, Scarbinsky questions the moral obligation a team has to tell recruits and the recruits' coaches.

Put aside legal obligations and the public's right to know for a moment.

What about a moral obligation?

Didn't recruits and their families have a right to know?

"If it was my son being recruited," Corner High School coach Brent Smith said, "I would want to know about it."

Smith didn't have a son sign with Alabama in February, but he did have a player join the Crimson Tide. Before his recent return to Corner, Smith coached at Clay-Chalkville, where he coached Alabama signee Quinton Dial. Smith said no Alabama coaches told him - or, as far as he knows, Dial - of the impending Infractions Committee appearance.

Personally, I don't think the Tide did anything wrong. Aren't players supposed to do a little due-diligence on their own to find out about the schools they seek to attend? This infraction has been known for a year and a half, and hadn't been resolved through the NCAA yet. Certainly one of the Tide's recruits did a little investigating?

How's your college investigation coming along, huh? Got a big stack of papers on Alabama? Got the 12 national championships, the Bear, and the coaching carousel? Know about probation and habitual violations? Got a compelling coach in Saban? Some teams become enemies, some teams become friends? No, no, you just take their word for it...

However, why exactly did the latest hearing date, February 20, 2009, occur so long after the infraction itself?

In that May letter, the NCAA said that Alabama had agreed to file its response to the allegations by Aug. 19, 2008, and that the Infractions Committee expected to hear the case at its October or December meeting.

"It should be noted," the May 19, 2008, NCAA letter said, "that a delay in responding (to the allegations) could postpone the hearing date."

And 16 days after signing day.

If Alabama manipulated the dates to get beyond National Signing Day, I believe that would be a moral failure, in spite of not being a legal one. Alabama officials and Saban aren't talking, but if Alabama did game the system, could there be any doubt that The Saban Rules are in effect--barely skirting above tree-top level with the regulations to gain an advantage? Is it just part of The Process? Indeed...

Alas, if the hearing results in scholarship losses, none of the new recruits will be affected. Neither will Alabama's recent recruiting national championship...