Auburn Comes From Behind To Beat Florida in SEC Tournament Action

Share All sharing options for: Auburn Comes From Behind To Beat Florida in SEC Tournament Action 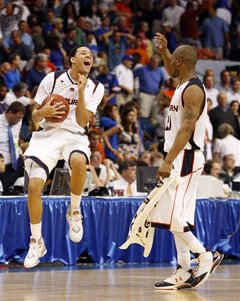 Does Friday's win get Auburn in the Big Dance?

TAMPA, Fla. (AP) - Korvotney Barber had 12 points, 10 rebounds and a huge dunk in the final minute to help Auburn beat Florida 61-58 Friday night in the quarterfinals of the Southeastern Conference tournament.

Frankie Sullivan had 12 points and Tay Waller and Lucas Hargrove added 11 apiece for the Tigers, who snapped a 10-game losing streak to the Gators. Auburn won for the ninth time in its last 10 games and may have secured a spot in the NCAA tournament.

Florida, meanwhile, probably will end up in the NIT for a second consecutive season after winning back-to-back national titles.

The Gators (23-10) had a shot to tie on the final possession, but Quantez Richardson blocked Erving Walker's 3-point attempt just before the buzzer. Walker immediately broke down in tears as the Tigers celebrated at midcourt.