Share All sharing options for: Auburn Comes Up Short In NCAA Tournament Bid 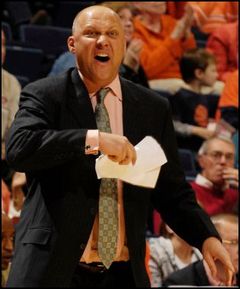 In the end it was not enough. Winning nine of their final 11 games was not enough to impress an NCAA Selection Committee that showed little respect for Auburn or the SEC. Never mind that the committee chairman was the SEC's own Mike Slive. Instead Auburn will face UT-Martin Wednesday night at Beard-Eaves Coliseum in the first round of the NIT Tournament.

Not since 1996 has the conference sent fewer than five teams to the Big Dance. Slive's hard work this weekend netted only three SEC teams - and poorly seeded ones at that. If only Slive could have been as passionate about Auburn as ESPN's Bob Knight was Sunday night on the network's selection show. Allies do come from unlikely places sometimes.

A lot of people will point to Miss State's upset win over Tennessee in the tournament championship as the reason for Auburn's bubble bursting. But looking at the seeds of the three teams from the conference that did make it, you quickly realize Auburn was probably out regardless of the outcome.

Regular season SEC Champion LSU grabbed only an eight seed, Tennessee a nine seed and tournament champion Miss State a number 13 seed. Looking at those numbers, it's pretty apparent Auburn had its work cut out for them after Saturday's semifinal loss to the Volunteers regardless of what happened on Sunday.

"Our kids are disappointed," said Auburn Coach Jeff Lebo. I told them I didn't want it to diminish the year that they had. "There's not a whole lot you can say to them. They were disappointed. They were hurt.''

Lebo knew his Tigers were in trouble when it was announced that Tennessee was a nine seed. "The kids didn't know it but I knew we'd be in trouble at that point," said Lebo. "I told them that it is very, very difficult to get into this tournament. A lot of things to get in this tournament you can't control. That's the tough thing to explain to your kids.''

The Auburn players now must turn their attention to the NIT Tournament, something a month ago they would have jumped at, but now must find a way to get up for. "We're disappointed we're not playing in the NCAAs, but these kids have been unbelievable," Lebo continued. "Twenty-two wins are the third most in school history. We'll discuss it (the NIT). The kids haven't played in postseason since I've been here. Hopefully, they'll be excited. We'll try as coaches to get that out of our system as quick as we can.''

The silver lining in all of this is that Auburn gets a number one seed in the NIT and a chance to play once more in front of the home crowd. They'll have to contend with UT-Martin's Lester Hudson, who was named a Mid-Major All-American this season. The Skyhawks bring a 22-9 record into Wednesday's contest. Tickets should be available from the University beginning tomorrow. Tip-off is set for 7 pm CT.