March Madness Can Drive Home Lessons About a Football Playoff

Share All sharing options for: March Madness Can Drive Home Lessons About a Football Playoff 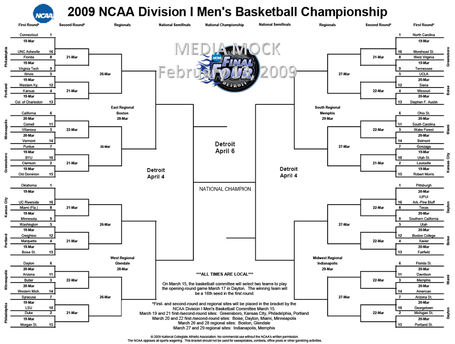 I participated in a NCAA Tournament pool today--just for funsies, mind you--the first time in well over a decade, and the first time ever online. Having actually paid attention to college basketball the last week with the hopes of us landing in the Big Dance, I actually felt like I made some informed choices. Of course, being the non-conformist that I am, I only had THREE number one seeds in the Final Four. Predictable? No sir, I am not, and my predilection for teams from the south and those of whose names I have ever heard guided my hand none in the least.

As much joy as it would have brought me for Auburn to have been selected as somebody's dance partner, my mind always wanders back to football, especially when a valid comparison to arguably college athletics' most successful franchise, the Tournament, can be made. Most fans in CFB want a playoff, but few think about how they would implement it or even realize the evolution that the Tournament has gone through over the years.

It's amazing how many fans would want an immediate 64-team football playoff, never comprehending the logistics behind such a feat and realizing what a complete foolhardy task it would be. March Madness didn't start with 64 teams (or 65 as it is now) , it started with EIGHT--about twice the number our inaugural playoff will likely have. They started in 1939, and didn't get to 64 until 1985 (and the number of teams wasn't always easily divisible by two, either).

As I'm oft to say, be careful what you wish for, so rather than tell you what an eventual playoff shall/will be, let's suppose for a moment that we granted one wish, an immediate 64 team playoff,and that by making comparisons to March Madness in all it's current glory, drive home a few good points about why it's not what we need right now.

BOWLS: Any playoff talk has to either start or stop with the bowls. How do you choose to use them? Lesser bowls as lower playoff rounds and the Big Four as your de facto Final Four? (with one bowl left over. Uh-oh.That's inconvenient...) Or do you call every playoff round a bowl now and just shuffle them around a bit like a collegiate game of 3-card Monty? More than likely, the Big Four will be the last rounds of the championship in Playoff 1.0, but as more teams are added over the decades, so will be the number of bowls vying for exposure. BB doesn't have such pesky things as bowls to either ignore or pay tribute to.

DISTANCE: Any fan of a given team following their team from beginning of the tourney to the championship game could probably rack up enough frequent flyer miles for a first-class second honeymoon to Tahiti. Notice how spread out the four regions are? Calling them north, south, east and west isn't a mere coincidence. Sixteen cities host initial games, followed by four more, then another with the Final Four. There haven't been that many MTV Real World sets.

Never mind the fact that you can't reuse a football field for six games like you can a basketball court, who's going to want to travel outside their 'region' to play? Can you imagine Auburn travelling to Seattle, or Southern Cal to Boston? Yea, roundball's world is infinitely less complicated by weather, i.e.--not having a dearth of venues in suitable climes. Perhaps top seeds could play a game or two on their home field, but that's not very Big Dance-like, right?

COST: It's a no-brainer that basketball games cost less to put on than football games, but what about the cost incurred by the fans? If you're having multiple games at one location, how do you get the fans in? These days, one ticket gets you a pass to the entire show. Would football be a one-shot deal? There's probably few fans that would want to invest 4+ hours to watch teams they care nothing about, unlike basketball, where the commitment is a little over two hours. You're more or less dating the game rather than marrying it.

That fact alone could stifle ticket demand and water-down fan interest in the early rounds. Couple that with the exorbitant costs associated with following a team through the entire playoff, and you'd be virtually guaranteed of having your fanbase stay home until the later rounds. Add on the costs of trotting your team, band and support crew all over the country like a bunch of Gypsies and you could bankrupt all but the most sound of athletic departments. Getting an invite to the big football dance would be like an automatic ticket to Chapter 11 and perhaps qualify you for some federal bailout money. (Then Obama could bitch about coaches getting all those bonuses)

TIME FRAME: There's a good reason that you only play one game a week and that coaches complain fiercely about having a short week with a Thursday night game--it's like recovering from a car accident. Notice that a lot of BB conference tournament winners played three games this weekend--some with two games within 24 hours. With a football playoff, you need one week to recover. That makes the math easy. Six rounds in a 64-teamer, so a month and a half to complete the playoff.

Basketball does it in three weeks, and they're only playing part-time. It ain't gonna happen. What are you going to do, compete with the NFL playoffs? Sorry, you must be done by the first week in January. We're already being flagged for encroachment on the Pros as it is. Start the playoffs in mid November? Doubtful, not with century-old rivalries at stake. Commencing playoffs that last half as long as the regular season isn't going to cut it either. That WOULD diminish the regular season substantially and would make conference championships either obsolete or irrelevant.

SEEDING: Think you don't like the polls now, imagine what will happen when you have to utilize them for the seeding of 64 different teams? Poll rankings help in basketball, but the conferences play a part in the seeding, too. Football would have the polls doing all of the ranking. Forget about getting left out of the football dance as it is, what about all the moaning that will occur when your team lands in a distant part of the country or falls into a lessor bracket because of a few measly points? Conference champs could again take precedence, but what about all the rest of your conference mates who are also tourney eligible? Some conferences could have eight or more teams, so you might have one bracket that had three of them in it. Of what importance would the conference championship have been if you would just have them suit up again in the NCAA's? Not much at all...

Again, just a little food for thought, now that we're staring down the epitome of a college athletic playoff. Is it really perfect? Maybe for basketball, yes. But applying the same format to football would seems as foreign as an Alabama player walking across the stage getting handed his degree. Or Nick Saban getting... You know. Never mind...