Share All sharing options for: Good Green or Bad? 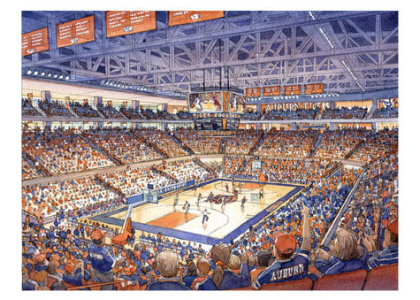 Build it and they will come?

With Auburn advancing to the second round of the NIT and making a late season run for the NCAA Tournament, most Auburn fans are bullish on the Tiger basketball program. Count me among them. It was nice to go through the winter months with an Auburn basketball team being competitive in conference play. On occasion I found myself thinking more about Tiger basketball than football - haven't done that since Chris Porter was on the cover of Sports Illustrated.

My guess is most Auburn fans would say they support the construction of the new basketball arena set to open two seasons from now. These are heady times for Jeff Lebo and Nell Fortner. After all, the Auburn men did manage a sellout for the regular season finale against LSU. And who can forget the sellout crowd that witnessed the Lady Tigers bring down perennial champion Tennessee? We're on a roll here guys - really!

So spending $100 million on a new basketball arena is a good thing. Right?

Earlier this week, Chris Low, ESPN's SEC Blogger, did a post around the theme of St. Patrick's Day where he looked at SEC schools that had spent good green (money) and bad green. Now if you've followed Low at all, you know he's a closet Alabama fan. And he's known to get a jab in at Auburn when given the opportunity.

With that as the back drop, he said Auburn was spending bad green when it came to the new basketball arena. Quoting Low...

Does Low have a point? I'll be the first to admit that initially, I was against the new arena. I had visions of brand new suites and 10,000 additional seats in the north end-zone of Jordan-Hare Stadium, bringing capacity to nearly 100,000. Close your eyes.  Can you picture it? Sweet.

But when you think about it, is that really the best use of athletic department funds? Yes and no.

Strangely enough, those stadium suites and additional seating will bring in far more revenue than a new 10,000 seat arena. There's a waiting list a mile long for those party boxes. To use the grammar of a Paul Finebaum caller, "They ain't cheap either."

Some will argue that Auburn only sells out for the big SEC games anyway and the additional seats aren't needed. Here's a point of clarification: They may not put butts in the seats for all the games, but they do sell out all of the available season tickets. And that means big dollars.

When it comes down to money from seating, Low is right. It does make sense to spend more to spruce up Jordan-Hare. But there's more to the story than just cash. It's important that Auburn be competitive in each of the big three sports (football, basketball and baseball). Outside of a couple of good runs with Sonny Smith and Cliff Ellis, there's really not been much to the Tiger program.

Auburn fans have gone so long without a winner on the court that until this season, most had forgotten how much fun roundball can be. Sure the University gets tons of press for its football program, but the coverage it has gotten this winter from men's and women's basketball has been invaluable to the University as a whole.

When you look at it that way, you begin to see that a new arena and a winning program doesn't just generate revenue; it also generates press coverage, which puts the Auburn name out there more than just from September to December. How do you put a price tag on that?

Many of you probably doubt how a new arena can make a team better. It certainly can't do it by itself. But like many lottery winners will tell you, money can't buy happiness, but it sure does help. Lebo told me last fall that he never takes a recruit to Beard-Eaves when they visit campus. He takes them everywhere else. Now how can that not be a handicap to recruiting better players and winning more games on Saturday afternoon?

Auburn is never going to be Kentucky and the Wildcats will never be Auburn when it comes to football. But that hasn't stopped them from building a nice stadium and drawing respectable crowds that produce decent football teams - at least over the past decade.

Auburn officials are trying to get there with the addition of this new building. It's also going to take Lebo coming out of his shell more and getting fans excited. He's taken huge steps in that direction already. State of the art arenas and coaches with personality never take the place of winning, but they do go hand-and-hand.

My guess is that once it opens, few Auburn people will question the investment. Tiger fans have rediscovered an old sport. And now it's poised to be a conference power for years to come. The facilities and money are there to make it happen. The question is, can Lebo eventually get Auburn there?