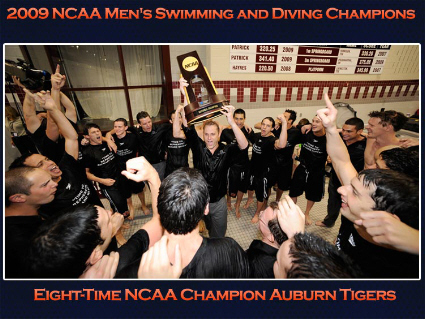 Glance at the headline of today's story and for many it's very easy to keep on going. After all, it's not about Gene Chizik's football team or Jeff Lebo flirting with Virginia Commonwealth. It's none of those things - but it is a better story.

Outside of the Olympics every four years, swimming gets very little notice in the sporting world. Michael Phelps has as much notoriety for hitting the bong at a frat party as he does for winning eight gold medals. But to miss the story of the 2009 Auburn Men's Swimming Team is to miss out on something special.

By now you've probably heard that the men captured its eighth NCAA National Championship Saturday night in College Station, Texas. For those keeping score, that's the sixth title in the past seven years.  Auburn entered the final day of competition trailing the University of Texas by six points. By sunset, the Tigers had rallied for a 39 point win over the Longhorns.

A bonafide dynasty? You bet. There are few teams that have dominated a sport like Auburn has swimming. Not Alabama in gymnastics or Georgia in tennis comes close to what these guys have accomplished over the past decade in the pool. Last summer's Beijing Olympics had an Auburn swimmer standing on the medal stand nearly every time a national anthem was played.

But as great as this all is, the real story is not about championships. It's about a coach and a group of guys men who've fought through as much emotional adversity as any team in recent memory. Painfully put, Auburn's coach is dying. His swimmers are hurting.

Richard Quick has inoperable brain cancer. Taking over for former Auburn legend David Marsh in 2007, the Tigers found someone with even better credentials than Marsh to lead its program - no easy task. To put it in perspective, it's like the Florida football team losing Urban Meyer as coach, only to end up with Pete Carroll.

During his career, Quick has won 13 National Championships while coaching at Stanford, Texas and Auburn. Heading into this season, Quick knew he had the goods to collect lucky number 13. Things changed last December when he was diagnosed with cancer. Shortly thereafter, he grudgingly gave up day-to-day duties to assistant Brett Hawke.

The rest is Auburn history.

Hawke masterfully pulled the team together and as a group rallied around its ailing coach. "It's a great tribute to Richard Quick and what he means to this program," said Hawke on Saturday night.  "It's a huge win for this program and was a total team effort. There's not one person that stood out amongst us."

"While he was not able to be on deck, I know that the coaching staff and student-athletes felt his presence this week and dedicated their efforts to him. We're very proud of Brett, the staff and team for their ability to overcome difficult circumstances this season and win a championship."

The eight titles now held by Auburn are tied for fifth most all-time with Stanford behind Michigan (11), Ohio State (11), Southern California (9) and Texas (9). During the three-day event, Auburn tallied 54 All-America honors and had one individual and three relay champions. The Tigers also set three US Open, three NCAA and 17 school records en route to the title.

"I am really glad I came home (after the Olympics). It was a memorable senior year," said senior Matt Targett. "This year was a total team effort. Last year we had a few superstars, this year we have an entire team of stars. Richard Quick was a massive part of what we accomplished. He isn't here, but we did this for him, more than for ourselves. We wanted to win his first men's championship for him."

The story of this team will likely not make the front pages of many newspapers across the country. There will be 10 times more stories about spring football practice than this group of champions. But none of these things make the story any less compelling. The past year hasn't been the best for Auburn Athletics. However, the story of this team and Richard Quick along with Brett Hawke is one of the best that's ever been written on the Plains of Auburn. It really sums up what sports and Auburn is all about.

Coach Quick: Here's to you. Congratulations and God speed. The Auburn Spirit is with you. War Eagle!