Share All sharing options for: High Salaries Bring High Expectations In The SEC 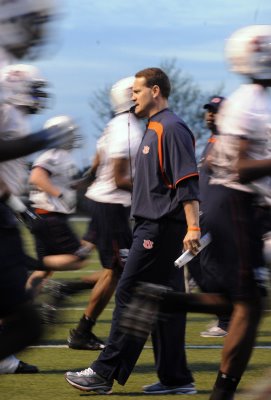 Chizik should be able to afford Christmas gifts this year.

With Auburn's spring practice in full swing, there's been a lot more college football talk lately on the radio, in newspapers and online. It comes as no surprise that much of the talk centers on first year coach Gene Chizik. Many of the storylines that were written last December are being revisited again.

Can he be successful? How's he doing so far? How long will Auburn's administration give him to be successful? These are just a few of the questions being floated by the media.

While those questions remain to be answered, what we do know is that Chizik and his new assistants are being paid handsomely to give it the old college try. Earlier this week, the Mobile Press Register got its hands on the official salaries of the Auburn coaching staff. It's safe to say that none of them are feeling this economic downturn.

Auburn's staff of nine assistants' ranks among the highest paid in the SEC and the nation. Coming in at $2.53 million, Chizik's staff ranks right up there with Nick Saban's at Alabama who bring in $2.68 million a year. Tennessee leads the conference at $3.32 million for its staff. Chizik is expected to bring home in the neighborhood of $2 million annually.

If you're Tommy Tuberville's old staff, you have to be scratching your head. Those guys were barely keeping the lights on in comparison to this new group. How much do they make annually? Let's take a look...

The only real surprise is that Roof makes more than the heralded Malzahn. I would have guessed those salaries would be reversed. One thing is clear: Taylor is not being paid that kind of cash to coach receivers. In addition to being an excellent offensive mind, he's regarded as one of the top recruiters in the country. Looking at what he accomplished in a short period of time earlier this year, you have to believe that he's as advertised.

Of course with big salaries come big expectations. These salaries combined with the controversy surrounding Chizik's hiring means there's probably a fairly short leash for Auburn's new staff to operate. At this cost, look for Auburn officials to demand marked improvement over the next two seasons.

There's no doubt the money is good, but the stakes are high. Let's hope Chizik and company earns their money quickly. At nearly $5 million in total salaries annually, the troops can get restless pretty fast. Good luck Gene.