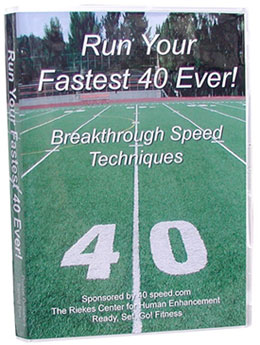 The Tampa Tribune's Brett McMurphy wrote Thursday about South Florida coach Jim Leavitt's attempt to promote the Bull's Spring game this Saturday by running a timed 40-yard dash and then challenging all students to break his mark. Those successful will win a T-shirt proclaiming, "I'm Faster than Leavitt". The Bulls evidently must not be expecting 92,000 at Raymond James this weekend.

"My goal is to break a six-flat," Leavitt said after Wednesday’s practice. "I’ll probably hit a 5.99. If anyone can’t beat me, that will be really sad. If there’s a student that can’t beat me … it ain’t like 5.9 is fast."

Leavitt, 52, joked that there probably wasn’t any other Big East coach that he could beat in the 40. Not even West Virginia’s 56-year old Bill Stewart. "It would probably be neck to neck," he said. Leavitt also joked that he would beat Florida’s Urban Meyer, FSU’s Bobby Bowden and Oklahoma’s Bob Stoops, an old jogging buddy of his.

So this got McMurphy thinking about how various coaches might fare if they ran the same 40-yard dash as Leavitt, and came up with the kind of smart-assery that we here at TET have come to demand and expect:

Jim Leavitt, USF: Gets off to a great start midway through the race running mostly against weak non-conference coaches. In the second half of the race Leavitt notices he’s running against Big East Conference coaches and stumbles down the stretch. To top it off, Leavitt jumped offside and was penalized five seconds. Afterward in the postgame news conference, Leavitt storms out after four questions, but shakes a reporter’s hand for asking a "positive" question.

Bob Stoops, Oklahoma: Stoops looks unbeatable for most of the race. He’s in position to win, but notices a "BCS Bowl" sign at the 35-yard mark, trips over his own feet and falls flat on his face, just short of the finish line. Again. For the third consecutive year.

Mark Mangino, Kansas: Back in 2007, the coaches’ 40-yard dash competition was unknowingly held on a downhill plane. Mangino tripped at the start and literally rolled to the victory in 4.2 seconds. Since then organizers have made sure the race was held on an even surface and Mangino hasn’t been able to match that success.

George O’Leary, UCF: In the pregame news conference, O’Leary talks about how great it is to have an opportunity to run against USF’s Jim Leavitt and how this race should continue to be an annual event. After the race when Leavitt – even with his offside penalty infraction added on – smokes O’Leary by several seconds for a fourth consecutive year, O’Leary still says he can’t understand why he can’t run against Leavitt every year and questions why the competition between the schools "60 miles apart" has to be stopped. On a side note: dozens of UCF fans got hold of Leavitt’s cell phone and left hundreds of messages on it before the race.

Rich Rodriquez, Michigan: Two years ago while at West Virginia, Rodriquez was on pace to set a world record and win his first coaches national championship 40-yard dash. Just before crossing the finish line, Rodriguez was passed by Dave Wannstedt, despite some serious wind drag from his Wann-stache.

Mack Brown, Texas: Brown defeats Stoops and Missouri’s Gary Pinkel in head-to-head races, but loses out in some convoluted tiebreaker. Nonetheless, Brown’s assistants, who trained him for the race, receive bonuses from the school for winning a race they didn’t win.

Rick Neiheusel, UCLA: Neiheusel hasn’t fared well in the 40-yard dash lately, but he has correctly predicted the winner and won the 40-yard office pool in each of the past three years.

Pure genius, but I think that McMurphy left off a few:

Tommy Tuberville: Got off to a slow start in the dash two years ago, but finished strong, prompting uber-agent Jimmy Sexton to get him a significant raise. After the following year's race when he stumbled off the blocks, Tubs was promptly fired and will work for a year commenting on other 40 yard dashes.

Les Miles: Came out running strong, but slowed down near the finish, forcing a dead heat in different dashes. He then proceeded to win the race in overtime on three occasions.

Pete Carroll: Won every dash east of the Mississippi by three lengths, but stumbled at backyard tracks in Los Angeles and in Oregon.

Joe Paterno: Was forced by injury to run his dash in the press box, but ran an impressive 4.9, which when measured in 1966 seconds is actually a 3.94.

Steve Spurrier: Finished near the back of the pack, but was rumored to be in-the-running for all teams looking to hire a new runner, forcing Gamecock officials into a salary bump on multiple occasions.

Nick Saban: Warned fans not to come to expect his 4.12 time last year as being the norm, and that consistently finishing under 4.6 was "A Process"...