Chizik Chases the Next Great Auburn Back

Share All sharing options for: Chizik Chases the Next Great Auburn Back 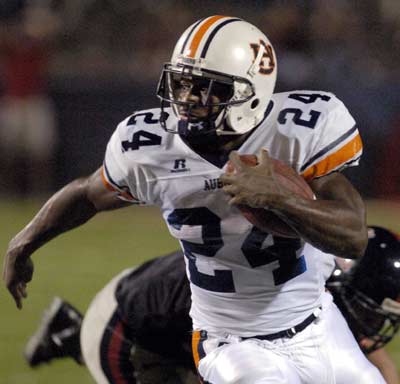 Its been five years since the last great running back lined up for Auburn.

When Auburn kicks off in September it will have been five seasons since the backfield duo of Carnell Williams and Ronnie Brown dominated SEC defenses. It has been 24 years since Bo Jackson won the Heisman Trophy and staked his claim as one of the best running backs in NCAA history.

In other words, Auburn is due. Running back U. is getting long in the tooth and it's time again for the program to land the next great back who will continue the tradition that's unmatched by anyone in the SEC. If you believe in karma, then you know it's time. Pat Dye's career at Auburn was launched in great part by the kid from McAdory High School back in 1982.

Tommy Tuberville had the benefit of three great backs to help launch his run on the Plains with Rudi Johnson, Williams and Brown helping turn Auburn's fortunes around. In the early 1950's, Shug Jordan called on All-American Fob James to lay the ground work for what would eventually lead to a national championship in 1957.

This weekend while everyone was enjoying Easter with their families, Gene Chizik was chasing his game changer. Texas native Lache Seastrunk was on campus with his mother taking in practice and getting to know the Auburn players and coaching staff. Seastrunk is widely regarded as the top prep running back in the country and the Tigers appear to be among his favorite.

Why would a Texas running back have Auburn on his short list? You can thank Auburn assistant Curtis Luper. His father is Seastrunk's pastor back in Temple, Texas. Seastrunk tells Inside The Auburn Tigers that is what got him to campus. "He is my pastor and he is a great guy," Seastrunk says. "Knowing his son is at Auburn and that he is a God-fearing guy makes it even better. I know Coach Luper has the spirit of God in him and God has gotten me to where I am today."

From listening to Seastrunk, it's apparent that Chizik and Luper pulled out all the stops. "I don't know if they planned it, but when I got to Auburn they had everything listed for me about how they will use me, how they will work with me and I have never experienced this anywhere else," Seastrunk said. "I have been to USC and a lot of other places and I can tell you the experience in Auburn is amazing.

"They haven't lied to me or my mom," he adds. "They have been straight honest with me. Auburn has an offensive coordinator (Gus Malzahn) who has worked with Darren McFadden. Auburn is a college that produced runners like Bo Jackson. They know their stuff. They know exactly what they need to do to get you where you need to be."

Seastrunk said he was also impressed by his meeting with Chizik. "It was amazing talking to him," he says. "He knows that they have a great chance at me. I enjoyed myself at Auburn and I could see myself going to college there."

While it's extremely early in the recruiting process, you have to love those comments if you are an Auburn fan. You can get bet there will be a full press for Seastrunk's services by the likes of Texas, USC and others as we get closer to next February. But on a sunny weekend in April, it looks like Chizik could be the clubhouse leader (can you tell I've watched the Masters all weekend?) for Seastrunk's services.

Once again, chalk up another impressive move by this coaching staff. No, they haven't won a game yet, but boy they do keep things exciting on the Plains these days. If you feel a little bounce in your step when you talk about Auburn football these days, you should. These energetic coaches remind you of the first Pat Dye staff that moved quickly to right the Auburn ship back in the early 1980's.