Five Things to Watch for on A-Day

Share All sharing options for: Five Things to Watch for on A-Day 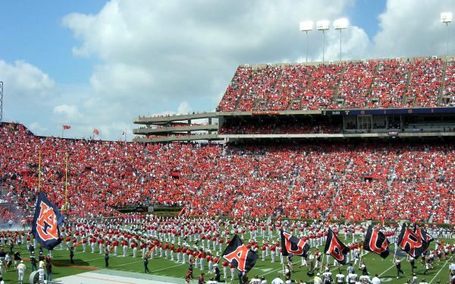 War Eagle, everybody! Is everyone fired up for A-Day? It's going to be a long, hot football dry spell till August, and I plan to enjoy this scrimmage to the hilt! Weather looks mighty fine for this one, with a high in the upper 60s and partly cloudy skies forecast. There will be storms moving into the state Saturday, but they should not reach the Plains till after dark. The Auburn administration is encouraging A-Day attendees to park at the hayfields on South Donahue. This is only a couple of blocks north of Loco's, where Track Em Tigers folk will meet, and should be convenient for all concerned! So, without further ado, here are five things I'm looking for on A-Day.

1.) Solid Quarterbacking. It's been five long years since we could take a five-step drop and fire a routine 10-yard out. Since Jason Campbell graduated, we've seen those passes sail to the stands, we've seen 'em in the dirt, and we've seen 'em hang up in the air like a helium balloon. If we're going to return to the heady days of 30 points+ offense, we've GOT to be able to make the routine throws. Conventional wisdom has the quarterback race down to Kodi Burns and Neil Caudle. For what it's worth, the latest message board chatter has Caudle winning the last scrimmage, with only one awful interception. Burns left 3 fumbles on the ground.

2.) Punt Returns. It's questionable whether we'll discover a return man this spring. It hasn't been made clear whether we'll see live punt returns on A-Day. I would think that they should practice this Saturday. Someone's going to be returning punts this fall, that's never done it in front of an SEC audience. Some live reps in front of a crowd could only help!

3.) Defense in the Middle. Probably the most disappointing aspect of last year's A-Day was the play of the linebackers and safeties. We didn't give up the deep ball. They contained outside options and sweeps pretty well, but were absent over the middle. The offense was able to make plays over the middle, all game long, either on inside handoffs, or short tosses to slot receivers and tight ends. This gave us false confidence in the Tony Franklin offense. Those holes weren't there to exploit during the regular season. In addition, we remained vulnerable over the middle, all year, on defense. I'm looking for a few good hitters to emerge, and a better sense of gap control. Defensive tackles will be expected to be able to slide and slant, in Chizik's system. We can't get posted up with our arms in the air, in the middle, this year!

4.) Lead Blockers. This is probably the area least covered by the media, and it's the MOST important if an offense is REALLY going to physical! A perusal of Auburn's spring roster is GLARINGLY thin at the key fullback and tight end positions. At tight end, only sophomore Bailey Woods is listed, behind Gabe McKenzie and Tommy Trott, and neither veteran is expected to play. At fullback, we have only junior Jason King listed. I would not be surprised to see some of the bigger running backs doing double duty, leading ball carriers into the hole. It might be Ben Tate, Eric Smith, or John Douglas having to do some blocking. It's been mentioned that Mario Fannin has added 20 pounds this year, and he might be the the guy. Honestly, this is probably the most important thing we'll see on A-Day. If we can't have at least some success blocking Auburn's current starting front seven, next fall is likely to be filled with more offensive struggles. On the other hand, if the powers of be have taken our most explosive runner, and turned him into an average-speed non-factor, I'm going to be seriously irritated!

5.) Just Catch the D@&# Ball! I'm looking for a few good receivers willing to go up and get a football in traffic. It has been a long, long time since we've had a wide receiver at Auburn, that you knew was going to catch that thing, no matter what! I'm thinking that Ronney Daniels was the last such guy.

War Eagle Atlanta has been wanting someone to explain A-Day scoring to him, all spring. I was excited to see several headers on that subject pop up on my feed reader today, and... I STILL can't explain it to him! I've seen at least three different lists out of the press, and they each have different point values. For instance, Phillip Marshall's list at AU-Undercover has 1 point for a blocked field goal, Charles Goldberg's Goldmine says it's worth three. Goldberg says that 3 consecutive first downs is worth 2 points, Marshall doesn't mention that at all. Maybe a more consistent list will materialize before Saturday, that we can print out!

Other items of interest: Incoming running back Onterrio McCaleb continues to wow folks. Look for him to make a splash Saturday. On the D-line, Antonio Coleman, Jake Ricks, and Zach Clayton have all gotten positive press. Everyone's excited about what linebacker Eltoro Freeman brings to the table.

I'll also take this time to weigh in on the breaking news about the deal falling through on playing UCLA in the Georgia Dome in 2010. While the story certainly makes Auburn look bad nationally, there is one thing to consider. Auburn's gate, concessions and revenue is somewhere in the neighborhood of $3 million PER HOME GAME. We might be passing on a half million from ABC in nixing the deal, but taking it costs the program a lot more. At least from a business standpoint, that 8th home game makes sense, especially when you consider how much we are paying our assistant coaches!

Have a great week, and I hope everyone enjoys A-Day. If you're not coming to the game, remember, it's going to be broadcast live on CSS, and many Auburn radio network affiliates are carrying the game! War Eagle! It's great to be an Auburn Tiger!